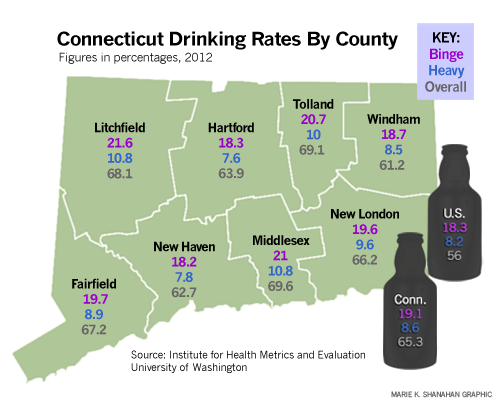 Rates of heavy drinking in Connecticut spiked 21.3 percent between 2005 and 2012, while binge-drinking rates rose nearly 14 percent, with the largest increases among women drinkers, a new report shows.

The increases put Connecticut’s drinking rates above the national average, with survey data from some counties showing that more than one in five adults are binge drinkers — defined as consuming more than four drinks a day for women and five for men on at least one occasion in the past 30 days. Heavy drinking and binge drinking rates were highest in Litchfield and Middlesex counties and lowest in New Haven and Hartford counties. All of the state’s counties exceeded the national rate for any alcohol consumption – 65.3 percent of adults statewide, compared to the national rate of 56 percent.

While Connecticut had higher-than-average rates in 2012, so did a number of other states in the Northwest, Midwest, and New England. Connecticut’s increases in binge and heavy drinking mirrored a national trend, but were higher than the U.S. average increases.

“I think what we’re seeing is that (problem drinking) is everywhere, not just in poor communities,” said Patricia Rehmer, senior vice president for behavioral health for Hartford HealthCare and former state commissioner of mental health and addiction services.

She said the increase in women drinkers was not a surprise.

“We’re seeing the same thing in Connecticut with opioids,” she said. “Women have increasing responsibilities at work and home — they want to do it all, and they’re under pressure. A glass of wine at night can become a bottle very quickly.”

The study – the first to track trends in alcohol use at the county level — found large variations in rates of excessive drinking among adults ages 21 and older across the country. Heavily Mormon Madison County, Idaho, had the lowest levels of binge drinking in 2012—5.9 percent — while Menominee, Wisconsin, home of the Menominee Indian Reservation, had the highest rates of binge drinking, at 36 percent.  Connecticut’s rate of binge drinking – 19.1 percent – fell in the middle.

The study, published in the American Journal of Public Health, was led by the Institute for Health Metrics and Evaluation at the University of Washington. Ali Mokdad, a lead author of the report, said the study shows “some very alarming trends in alcohol overconsumption, especially among women. We also can’t ignore the fact that in many U.S. counties, a quarter of the people, or more, are binge drinkers.”

Nationally, women showed a much faster escalation in binge drinking than men, with rates rising 17.5 percent between 2005 and 2012. Among men, rates of binge drinking increased 4.9 percent.

Those increases were steeper in Connecticut, where the prevalence of binge drinking among women rose nearly 21 percent, and among men, 10 percent.

Nationwide, heavy drinking increased 17.2 percent since 2005. The increase among women was 28.2 percent.

In Connecticut, 10.8 percent of women were identified as binge drinkers in 2005. That increased to more than 13 percent in 2012, slightly higher than the national average. The rate of binge drinking among men in the state remains significantly higher, at 25.4 percent.

Rehmer noted that the national focus has been on combatting binge drinking among college students and underage drinkers, rather than adults. She said there is a stigma associated with heavy drinking among women, especially those in affluent communities who have children.

Catching problem drinkers early, through screening and brief interventions — at primary care appointments and other settings – is key, she said.

“We need to do more early screening and educating around risk factors – family history, stress, genetics – to open up the conversation,” she said.

Jack Malone, director of the Southeastern Council on Alcoholism and Drug Dependence, said the Connecticut numbers were not surprising, given “the prevalence of alcohol, the advertising of alcohol, and the freedom with which we accept alcohol as part of our culture.” “We show our young people that alcohol is used for celebratory occasions, or to help deal with stress. I don’t think we educate them enough that there’s a serious downside,” he said. “When you binge drink, it increases the possibility that you will cross the line into addiction.”

Malone said his agency has served an increasingly younger and more affluent clientele, with “more and more women” addicted to opioids – pain medications and heroin.

While Litchfield and Middlesex counties had the highest proportion of heavy drinkers in 2012 – 10.8 percent of adults – New Haven and Hartford counties had the lowest – less than 8 percent. Fairfield County had 9 percent.

Similarly, while the prevalence of binge drinking among adults in Litchfield and Middlesex counties topped 21 percent, the lowest binge drinking rates were in New Haven and Hartford counties – about 18 percent.

Overall drinking rates – the percentage of adults who reported at least one alcoholic drink in the last 30 days – remained relatively flat from 2005 to 2012 in Connecticut and nationally. The proportion of adult drinkers was highest in Middlesex County – 69.6 percent of the population – and lowest in Windham County – 61.2 percent.

Nationwide, overall drinking is highest in some affluent areas, led by suburban Falls Church, Va., where 78.7 percent of adults drink, and several counties in Colorado that include ski resort areas.

Binge drinking is commonly associated with a higher risk for serious bodily harm, such as injuries, alcohol poisoning and acute organ damage. Heavy drinking is considered a risk factor for longer-term conditions, such as liver cirrhosis and cardiovascular disease.