Those disparities in two of the most common reasons for hospitalizations among state residents point to larger problems in access to care, underlying health status and insurance coverage, according to a study published today in Connecticut Medicine, the journal of the Connecticut State Medical Society. The society is hosting a forum today to discuss ways to reduce disparities in readmissions of patients with heart failure, chest pain and three other conditions: joint replacement surgery, digestive disorders and uncomplicated childbirth.

“We’re seeing large disparities in readmissions for a number of conditions,” said Robert Aseltine, the study’s lead author and professor of behavioral science and community health at the University of Connecticut Health Center. “There’s no one factor that jumps out. There’s no simple answer. ” Co-existing health conditions and socioeconomic status, for example, “don’t explain everything away.” 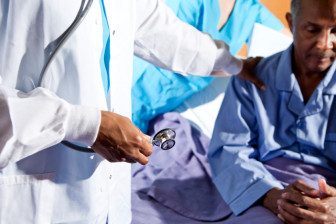 In addition to ethnic and racial disparities, the study found that patients who were insured publicly – through Medicaid or Medicare – were significantly more likely to land back in the hospital within 30 days of discharge than those with private insurance. For heart failure, the rate of readmission was about 40 percent higher among the publicly insured, while Medicaid or Medicare patients with chest pain were more than twice as likely as privately insured patients to be readmitted within a month.

Aseltine said that while co-existing health conditions and insurance status account for some of the disparities, controlling for those factors still leaves differences in readmission rates for some conditions. For chest pain, for example, when differences in insurance payer and level of patient sickness were held constant, disparities in readmissions disappeared. But with heart failure, Hispanics remained more likely to be readmitted, regardless of their insurance status or level of sickness.

“It is not the case that we can just say, blacks and Hispanics are more likely to be readmitted when they’re covered by Medicaid,” he said. “There are other things going on.”

While the study does not examine those factors, it does cite barriers to accessing community care as a reason why Medicaid patients may be more likely to land back in the hospital. A report last year by the legislature’s Program Review and Investigations Committee cited a lack of access to specialists as a key problem for Medicaid patients.

Aseltine said the range of explanations for disparities includes everything from the quality of provider-patient communication, especially before discharge, to patients’ connections to primary care providers. Medicaid patients, in particular, tend to have “very little connection to primary care, prior to their hospitalizations,” he said.

In the study, Aseltine and his co-authors say the readmission disparities in Connecticut should “serve as a catalyst for further investigation of the interplay between patient characteristics, hospital practices, community-based resources and insurance coverage.”

Readmissions are a growing concern for hospitals, which now face penalties from the federal Centers for Medicare & Medicaid Services for excessive readmissions of patients with certain conditions, including heart failure. Hospitals are penalized no matter why a patient returns, even if it was not connected to the initial inpatient stay. The penalties are intended to prompt hospitals to ensure that discharged patients have adequate care plans in place – and to reduce Medicare spending.

The new study found that the most common reasons for readmission after hospitalization for chest pain were respiratory symptoms and other forms of chronic heart disease. Patients hospitalized for heart failure most often returned because of a recurrence of heart failure, rather than other ailments.

The length of the first inpatient stay was not a factor in whether patients ended up re-hospitalized, Aseltine said.