Concerns about the use of shackles on juveniles in court have prompted two lawmakers, Rep. Bruce Morris of Norwalk and Rep. Toni Walker of New Haven, to introduce legislation to limit the use of restraints.

The proposals are in response to advocates’ concerns that juveniles are often shackled when they appear in court unless their attorneys ask that the restraints, which can include handcuffs, leg irons and belly chains, be removed.

Morris, who chairs the General Assembly’s Black and Puerto Rican Caucus, said shackling is demeaning and can damage a child’s sense of self-worth. “It says, ‘I don’t trust you enough that you will honor the dignity of a court. You’re unmanageable,’” he said. “Is that a message we want to send? I say no.” 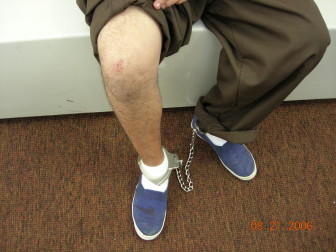 Under current policy, juveniles are normally shackled when being transported from detention centers to the courthouse, and whether or not the restraints stay on in the courtroom depends on an assessment of the child’s behavior in detention. But advocates say the policy is not followed consistently.

“What I’ve heard from the public defenders is that unless they ask to have the shackles taken off, most of the time they don’t come off,” said Christine Rapillo, director of delinquency defense and child protection for the Connecticut Office of the Chief Public Defender, who supervises public defenders for juveniles.

“The legislation would essentially create a presumption that a child would not be shackled in a courtroom unless the court made an affirmative ruling,” said Marisa Halm, director of TeamChild Juvenile Justice Project at the Center for Children’s Advocacy.

But Judge Bernadette Conway, the chief administrative judge for juvenile matters for the state, said that in her experience presiding in juvenile court, previously in Middletown and now in New Haven, the policy is followed consistently. She said she had not heard of any cases in which juveniles remained shackled if the risk assessment did not warrant it.

“The marshals seem to have an understanding of the policy and it appears that the policy is being followed,” she said. “If it’s not being carried out, we need to correct that.”

“It has not come to our attention that standard operating procedure is shackled unless the lawyers request,” said Stephen Grant, the executive director of court support services for the judicial branch. The shackling policy has been modified significantly in recent years in response to concerns from advocates and public defenders, he said. According to data provided by the state, the proportion of juveniles fully restrained in court — with leg irons, handcuffs and belly chains — has declined significantly from 84 percent in 2012 to 23 percent in 2013. Over the same period, however, the number restrained with only leg irons increased from 14 percent to 52 percent, which means that 75 percent of juveniles were still restrained with at least leg irons.

Social workers at the detention centers are responsible for screening children for risk of escape or dangerous behavior. “We did not want solely a custodial person—whose frame of reference is security—to make that decision,” but to have the assessment informed by social science, Grant said. “We’re very sensitive to not further traumatizing a kid whose life is in chaos. It’s a balance.”

Julian Ford, a professor of psychiatry and director of the Center for Trauma Recovery and Juvenile Justice at the University of Connecticut Health Center, said restraints can be especially traumatizing to juvenile offenders.

“Shackling is not only public embarrassment and physical restraint. It literally picks away at the youths’ ability to control their own bodies,” Ford said. “It reinforces the idea that they are viewed by society and the community as people who are bad and need to be restrained.”

That belief can be self-fulfilling, leading youths to view laws and social customs as irrelevant to them, he said. “Since children are still developing a self-concept and sense of their identity, shackling can change how they view themselves … It reinforces their own views of themselves as bad people.”

In addition, many juveniles have witnessed violence or suffered abuse, and shackling can reactivate traumatic memories, leading to anxiety, hostility and behavior problems.

“You’re unnecessarily causing trauma to the child,” Rapillo said. “We’re dealing with kids. It’s supposed to be a more rehabilitative system. It’s a place where you’re holding people accountable, but doing it in a way that’s going to turn them into productive citizens.”

The U.S. Supreme Court has ruled that shackling defendants in view of a jury violates the person’s presumption of innocence, among other rights, but in Connecticut juvenile cases are decided by judges, not juries. “When that child is appearing in front of the judge time and time again in shackles,” Rapillo said, “the argument is that it has the same impact on the presumption of innocence as an adult defendant appearing in front of a jury in shackles.”

In recent years, several states have changed their laws and policies to restrict shackling to cases where there has been a specific finding that restraints are warranted. In 2006, Miami-Dade County in Florida changed its policy after a successful challenge by public defenders. “Since then, more than 20,000 detained children have appeared before the court unbound, in proceedings that respected their dignity and fostered the goal of rehabilitation. In that time, no child has harmed anyone or escaped from court,” wrote public defender Carlos Martinez in “Unchain the Children: Five years later in Florida,” a report issued in 2011.

The practice can also threaten the confidentiality of juvenile court if the shackled children are visible in public. In the Danbury courthouse, because of the layout of the building, juveniles are brought through a public area on their way to the courtroom, said Sharon Elias, supervisory assistant public defender in juvenile court for Waterbury, Torrington and Danbury. “They are walking through public areas shackled,” she said. “When I first saw it, I was shocked.”

Morris, who is director of human relations at Norwalk public schools, said that in his experience, incentives for positive behavior work better for young people than punishment for bad behavior. Shackling is counterproductive to the mission of the juvenile court system, which is to correct bad behavior, he said.

“If I am going to get you on the right track, I have to demonstrate that I have hope and faith that you can change,” he said. However, “if your expectations of children are low, then they behave as such.”