Five Vietnam War veterans, including a New Haven resident, filed a federal lawsuit Monday, claiming that they have been denied benefits and suffered stigma because they received “other than honorable” discharges due to Post-Traumatic Stress Disorder (PTSD).

They asked the U.S. District Court in New Haven to designate the suit as a class action on behalf of tens of thousands of Vietnam veterans in the country in similar circumstances.  PTSD wasn’t designated a medical condition until 1980, five years after the Vietnam War ended. Many Vietnam veterans with undiagnosed PTSD contend they received other than honorable discharges due to behaviors connected with that illness.

Vietnam Veterans of America and its Connecticut State Council, and the New Haven-based National Veterans Council for Legal Redress are also plaintiffs in the suit. They are being represented by the Yale Law School  Veterans Legal Services Clinic.

U.S. Sen. Richard Blumenthal, a Democrat, said he will ask U.S. Defense Secretary Chuck Hagel to take action now, without waiting for the outcome of the lawsuit, and give “recognition to post-traumatic stress as a wound of war” in evaluating Vietnam War veterans’ requests to have their discharges upgraded.  He said he will also ask Congressional colleagues to join the suit as friends of the court.

“These veterans were wounded in war and wounded again by their country that denied them medical benefits,” Blumenthal said. “The height of outrage is to put our men and women in uniform at risk as we have done, then put them at risk again when they come home,” he said, adding that untreated PTSD sufferers are susceptible to a range of problems, including homelessness, joblessness and drug addiction. 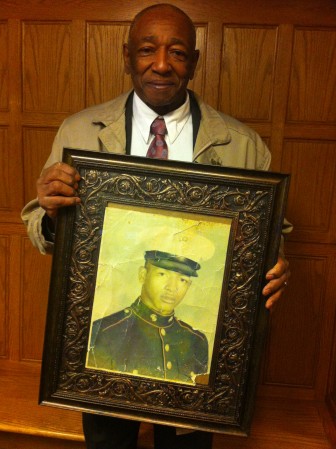 Plaintiffs and their lawyers said that if they served today in Iraq and Afghanistan, they would have received medical discharges.

“My discharge status has been a lifetime scar,” said Conley Monk, of New Haven, a plaintiff.  “If I were discharged today, my PTSD would be recognized and treated, and I wouldn’t be punished for having a service-connected medical condition.”

Other than honorable (OTH) discharges are a gray area which often result in either denial of veterans’ benefits because of their discharge status or veterans’ incorrectly assuming that all veterans with that status are not entitled to benefits and don’t apply for them, according to veterans’ advocates.  The five plaintiffs in the lawsuit all applied for discharge upgrades and have been denied.

A Marine Corps veteran, Monk said he left Vietnam in 1970, but still has resultant nightmares and night sweats.  In the war, he transported supplies and troops to the demilitarized zone (DMZ).  “Every time I came back, my truck was full of holes.” He received an OTH discharge in connection with morphine use, which he said he took to “escape the nightmares.”

“I wake up every morning in a cold sweat.  I have to bring two tee shirts to bed with me, I get so wet,” said Monk who with his brother, Garry, formed the National Veterans Council for Legal Redress. After completing a drug rehabilitation program at the Connecticut Mental Health Center, Monk worked as a drug counselor at Yale-New Haven Hospital, and the Columbus House and ATP Foundation, both in New Haven. He said he paid for his own education at the University of New Haven.

The stigma associated with OTH discharges on top of the negative treatment Vietnam veterans received when they returned home prevented many veterans from seeking medical help, said Pattie Dumin, president of Vietnam Veterans of America Connecticut State Council.  “Nobody liked us when we came home,” she said in an interview, explaining other military veterans criticized them for losing the war, while opponents of the war chastised them for serving in it.

V Prentice, a law school student working on the case, said that the exact number of veterans nationwide and in Connecticut that could be affected by this lawsuit is not yet known. He said the law school clinic knows there are tens of thousands because of statistics related to veterans with PTSD and other than honorable discharges. He said that part of the purpose of the litigation is to “bring this issue to the fore” so that veterans will come forward and identify themselves.

Virginia McCalmont, a law student working on the case, said that the lawsuit seeks to require the Pentagon to use “medically appropriate standards in reviewing Vietnam veterans’ requests to upgrade their discharges.” She said the stigma associated with their discharges has “prevented them from receiving recognition and respect.”

She said now, the Vietnam veterans with PTSD are elderly and often “in poor health and indigent” and haven’t had the financial wherewithal to take legal action. The Yale clinic represents its clients for free.

Blumenthal said a reason this lawsuit is being initiated nearly 40 years after the war ended is that even though PTSD received recognition from the medical community in 1980, it took until the last decade for the military and Federal government to take aggressive steps to treat and help military people and veterans diagnosed with it.