Hypertension rates among women in all eight Connecticut counties increased from 2001 to 2009, with disparities widening for African American women compared to whites and Hispanics, according to a C-HIT analysis of data from the Institute for Health Metrics and Evaluation at the University of Washington.

In fact, nearly one out of every two African American women living in Connecticut suffers from hypertension, a life-threatening condition that can lead to heart attack, stroke and kidney disease, research shows. 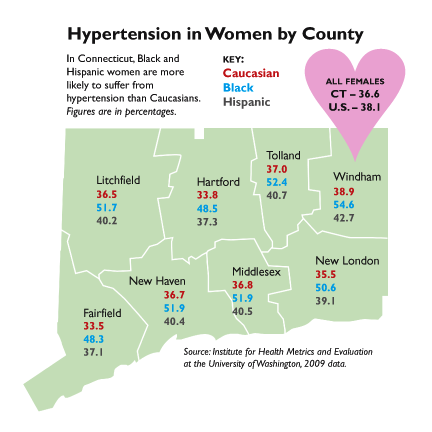 The rising trend in hypertension coincides with increasing adult obesity rates in Connecticut and the nation, as stepped up efforts focusing on wellness — from Michelle Obama’s national physical activity campaign “Let’s Move!” to serving healthier meals at local public schools — look to stem the tide in future generations. The state findings on hypertension mirror national statistics showing black women with the highest rates.

In Connecticut, health experts pointed to a mix of genetic, socioeconomic, and cultural factors as contributing to hypertension among black women. Long-term solutions, they said, call for intensifying outreach, screening and education efforts that are culturally sensitive to the unique challenges African American women face when it comes to their health.

Researchers at IHME collected data in 2001 and 2009 for hypertension.

• More than 50 percent of the black women living in six of the state’s eight counties in 2009 – Litchfield, Middlesex, New Haven, New London, Tolland and Windham – had hypertension. The other two counties – Fairfield and Hartford – were close behind at about 48 percent.

• The highest rates in 2009 were in Windham County, where 54.6 percent of black women had hypertension, compared to 38.9 percent for whites and 42.7 percent for Hispanics. Black women in Fairfield County had the lowest rate (48.3 percent), but still significantly higher than their white (33.5 percent) and Hispanic (37.1 percent) neighbors.

• Hypertension rates among all African Americans, women and men, surpassed those of whites and Hispanics statewide. But black women were hardest hit, with rates higher than those for black men. In Middlesex County, which had the largest gap between the sexes, 51.9 percent of black women had high blood pressure, compared to 45.5 percent of black men in 2009.

• As hypertension increased among all women in Connecticut, so did the percentage with obesity, considered a major risk factor for high blood pressure. The highest increase was in Windham County, where 36.6 percent of women were obese in 2011, up from 27.3 percent in 2001.

Dr. Anita Kelsey, director of the Women’s Heart Program at St. Francis Hospital and Medical Center in Hartford, said physicians often fail to recognize or treat women with hypertension and cardiac issues, even though heart disease is the nation’s leading case of death for women. The program offers free cardiovascular risk assessments and education, with a focus on reaching women with no or limited health insurance.

“Studies show women are not treated as aggressively as men for cardiovascular risk factors by their primary care physicians across the board regardless of their health insurance,” said Kelsey. “As a practicing cardiologist, I’ve seen many women with medical records that indicate they’ve had high blood pressure for a decade. But no one told them it needs to be treated.”

The risk for hypertension can begin early in life, especially for the poor.

“People in lower social economic classes who have poor maternal nutrition when they are pregnant tend to have lower birth weight babies with stunted kidneys at birth that can lead to hypertension as you get older,” said Schuster. In Connecticut, 16 percent of the babies born to black women in 2010 had low birth weights, according to the state Department of Public Health.

Although genetic variations put African Americans at greater risk for hypertension, hereditary accounts for only about 20 percent, said Schuster. He points to studies showing that 14 percent of black women in Africa have hypertension, compared to 26 percent in the Caribbean and 33 percent in the United States. “This shows that some of the hypertension is genetics,” he said, “but a lot of it is caused by environmental factors.”

The stress associated with life as an African American – whether it’s struggling to pay bills, worrying about children in unsafe neighborhoods, or managing the subtleties of prejudice – can also take a toll on women’s health, according to state and national health experts.

“Many African American women are prioritizing children and family over their own health,” said Patricia Baker, president and chief executive office of the Connecticut Health Foundation, a non-profit organization working to reduce health disparities among people of color.

“We cannot deny that stress as a result of racism and discrimination is real. This is true not just for poor black women, but for middle class black women, as well,” she said.

Take the Rev. Nancy Kingwood-Small, for example. She’s deputy director of HIV Services at the Greater Bridgeport Area Prevention Program and an associate minister at the Mount Aery Baptist Church. She holds several degrees including a master’s in human services. Now she’s a student at Hartford Seminary pursuing a master’s in theology and ethics.

“Yet before I open my mouth, people see an overweight black woman. They have already categorized me because of who I am and not for what I can do or what I know,” said Kingwood-Small, who was diagnosed with hypertension seven years ago. “Often time, people think there is no more racism or discrimination. But it’s there. It’s alive and it’s doing well.” 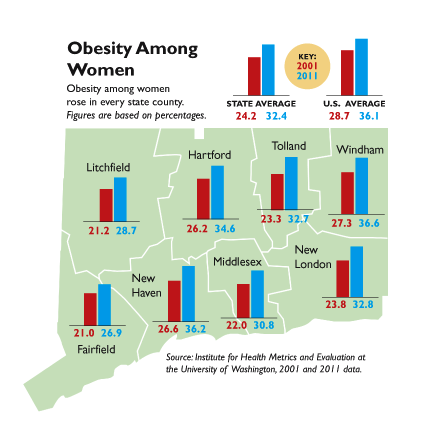 Obesity and risk factors from poor diets, physical inactivity, and smoking contribute to the rise in hypertension.  “Obesity explains a lot of the hypertension,” said Schuster. Nationwide, four out of five African American women are overweight or obese, reports the US Office of Minority Health.

“I grew up eating macaroni and cheese, fried chicken and collard greens,” said Kingwood-Small. “It’s hard to change.”  She recalled her family’s reaction upon serving a healthier version of collard greens that substituted smoked turkey for ham hocks and neck bones: “This doesn’t taste like grandma’s!”

Fortunately, women can take steps early on to reduce their risk for hypertension through assessment, exercise and nutrition, said Kelsey, who works with a registered nurse, nutritionist and exercise physiologist at the Women’s Heart Program. More than 8,000 women have received risk assessments, education and follow-up support at St. Francis Hospital and community sites since the program began in 2006, leading to an overall reduction of 5 millimeters of mercury for systolic blood pressure.

“That may not sound like a large number, until you consider that a drop of 2 millimeters in mercury in systolic blood pressure across the nation, on average, would save 70,000 lives in one year,” she said.

Understanding cultural nuances is critical, said Kelsey. For example, speaking with African American women about losing weight poses challenges in a culture that doesn’t always celebrate thin women. Even using terms such as “body mass index” can alienate some women. These cultural subtleties underscore the “importance of having open conversations with women about why they can’t modify their lifestyles and what barriers need to be addressed to help them reduce their risk factors,” said Kelsey.

For Kingwood-Small, the “toughest part of managing this disease is my lifestyle. I am a workaholic.  My schedule is crazy busy at work and church, so I tend to pick up (unhealthy) food along the way.”

But “cultural factors” pose obstacles, too. “In the African American community, we eat for every occasion, whether it’s the birth of a baby, the death of a loved one, a wedding, or just family night,” she said. “There’s always a lot of food!” Being part of a community that dismisses hypertension doesn’t help. “You often hear black women say ‘Oh, my blood pressure is always a bit high’ as if it were nothing to worry about,” she said.

The 52-year-old decided to take action when she learned about hypertension’s deadly consequences. “I want to make sure I’m here for my eight grandchildren,” said Kingwood-Small, who believes education can empower black women to make lifestyle changes that benefit everyone.