If Connecticut officials are going to continue to allow schools to use seclusion as a behavioral intervention, can’t they at least make sure that seclusion rooms have chairs?

That was the understated, soft-spoken plea from a 19-year-old student named Laquandria, who told a gathering of state agency leaders, educators and parents Thursday that she had been secluded and restrained multiple times while attending public schools and special education programs in Connecticut. 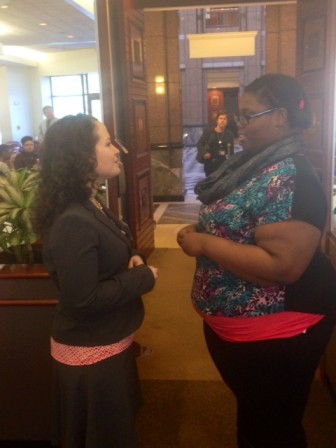 “The walls weren’t padded, there was nowhere to sit – I felt like an animal,” said Laquandria, whose last name was withheld because of her family’s involvement with the Department of Children and Families. She is now finishing her high school education at a Hamden residential program. “I feel like, you know,” she told the assembled state officials, “we should at least have somewhere to sit.”

Her comments punctuated a three-hour forum on the use of restraints and seclusion in state schools, convened by the Office of the Child Advocate and the Office of Protection and Advocacy for Persons with Disabilities. The forum comes six months after leaders of the two watchdog agencies called for an end to the use of restraints and seclusion as behavioral interventions in schools, as they investigated the controversial use of “scream rooms” at the Farm Hill Elementary School in Middletown.

In recent months — concerned that schools are still using restraints and seclusion unnecessarily, especially as diagnoses of autism and emotional disorders rise – a coalition of eight state agencies launched a public education campaign to reduce their use. On Thursday, the group invited experts, parents and educators to discuss possible reforms, including improved training in alternative behavioral interventions, a shift from reactive to preventive strategies, and changes in state and federal law.

“For a very long time, we have gotten it wrong in dealing with children” with behavioral problems, said U.S. Sen. Christopher Murphy, who deemed the school disciplinary system “broken.” He said he was working with other senators on federal legislation that would restrict the use of restraints and seclusion in schools – practices currently regulated by states.

The Connecticut education department recently began compiling comprehensive data on the use of restraints and seclusion in schools, but does not have a specific strategy for reducing or eliminating those practices. A state report last year showed more than 18,000 incidents in which special education children were restrained or secluded in “emergency” situations, and another 18,000 incidents in which they were secluded in accordance with a student’s individualized education program, or IEP. More than 800 children were injured in those instances, eight of them seriously.

Connecticut state law allows for the use of restraints and seclusion in emergencies that pose imminent danger to a student or others. But it also allows for special education students to be placed in seclusion if their IEP provides for such placement – a provision that some child advocates say is overly broad. Educators are supposed to notify a child’s parents or guardians of each incident in which a child is placed in seclusion or physically restrained.

James McGaughey, director of the Office of Protection and Advocacy, and Sarah Healy Eagan, the state’s child advocate, said reducing restraints and seclusion will take both broad “consciousness-raising” and specific training and resources for new strategies to de-escalate problem behaviors.

“When Teacher A puts Johnny in a closet for an hour, we have to look at, what are her alternatives?” McGaughey said. “You have to allow that it could be the only thing she knows to do, because there aren’t other options.”

Eagan and McGaughey said seclusion should be used only as an emergency response, not as a “planned consequence of behavior,” as it is now under the IEP provision in state law. 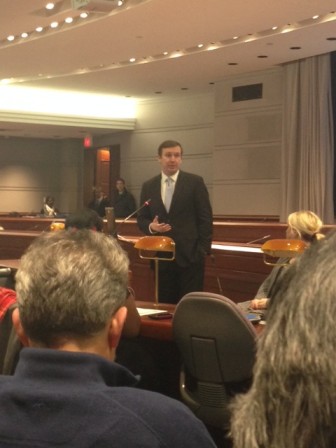 Experts at the forum said there is no evidence that restraint or seclusion serves any therapeutic or educational purpose, and that instead, those measures can traumatize children. Special education and minority students have a higher likelihood of being placed in restraints or seclusion.

“There are significant toxic personal costs,” said Janice LeBel, director of program management for the Massachusetts Department of Mental Health. She and George Sugai, a professor of special education at the Neag School of Education at the University of Connecticut, said schools across the country have managed to reduce the use of restraints and seclusion by establishing tiered systems of behavioral supports and interventions for students, both individually and school-wide.

In 2012, the U.S. education department issued a “resource document” to schools that discourages the use of physical restraints or seclusion except in situations where a child’s behavior poses imminent danger of serious physical harm to self or others. But there is no federal law restricting the practices.

Bryan Klimkiewicz, assistant superintendent of the Plainfield public schools, said his school system had revamped its clinical day treatment programs in order to reduce class sizes, allow for more integrated classes and prevent conflicts that could lead to the need for seclusion. “We’ve overcome some of the obstacles, in terms of environment, class sizes and training,” he said.

Shelly Matfess, assistant superintendent for pupil personnel services for the Manchester schools, said there is a “critical need” for training in alternate behavior-management strategies – as well as resources to implement those strategies.

McGaughey and Daniela Giordano, public policy director for NAMI-CT (National Alliance on Mental Illness), said removing the provision in state law that allows for seclusion to be part of a student’s IEP would be a step towards avoiding unnecessary harm to students.

But McGaughey said that changing the law would do little without injecting new resources into schools for alternative interventions.

Federal legislative efforts to prohibit restraint and seclusion except in cases of imminent danger have stalled in recent years. Murphy acknowledged that the successful re-introduction of that legislation would be “a very heavy lift.”