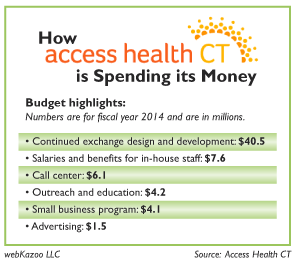 What does it take to build a health insurance exchange that works?

An early start. A detailed plan. A staff and contractors who know what they’re doing. Lots of public outreach. That’s how much it’s expected to cost to get the new federally mandated exchange, Access Health CT, up and fully running. The exchange began enrolling people Oct. 1, but the “build” of the system continues through this year as bugs are fixed and functionality is added.

Connecticut, like 15 other states and the District of Columbia, is building its own locally based exchange – the marketplace where the uninsured must enroll for coverage under the Affordable Care Act.

Multiply Connecticut’s costs nationally, and you get an idea of how enormous the undertaking is.

After that, AHCT’s ongoing operations – estimated to be $35 million annually – will be funded by an assessment against all the health and dental plans written in Connecticut. AHCT will begin building reserves in 2014 with a 1.35 percent assessment to be paid by the insurance carriers.

Most of the grant money – roughly $138 million – is going to contractors who are developing the computer system at the heart of the exchange and marketing it to Connecticut consumers. Another $14 million is being spent on salaries and benefits. All of the expenses are for the three years of the federally-funded “build.”

AHCT currently has the equivalent of 88 full-time employees.  The highest paid – at $225,000 a year – is CEO Kevin Counihan, according to documents.

Supporters of health care reform acknowledge that $156.3 million is a lot of money – about $460 for each of the 337,337 uninsured Connecticut residents that the new system is designed to cover. But no one has ever tried to create a system like this and startup costs are naturally high, they say. Constant changes in federal rules and requirements also drove costs up.

The goal is quality health care that costs less and is accessible to all, said State Sen. Terry Gerratana, D-New Britain, co-chair of the General Assembly’s Public Health Committee. It’s a long road, and the exchange is only one step in it, she said.

This step, she said, is about making sure everyone is covered. “This is not health care reform. This is insurance reform,” she said. “This is an evolution.”

Ellen Andrews, executive director of the Connecticut Health Policy Project, has doubts. “It is a great deal of money – maybe too much money,” she said. She worries that the exchange will become a burden on health and dental insurance providers when the federal grants end. That, she noted, could result in higher premiums for everyone.

AHCT has defended the murals as one of many creative marketing efforts that it is using to reach out to consumers. Connecticut is the first state to surpass its goal for enrollments, and AHCT says that raising awareness is an important driver of the results.

Kelly said the $24,000 spent on a mural at Bridgeport’s Optimus Health Center was more than the proposed annual increase in funding for medical services there. “It does not look good when Access Health CT spends money on things like murals, even if it is only a small percentage of funding, when there is so much left to do to improve the overall system,” he said. “The priorities here are all wrong.”

Managers at AHCT face a unique challenge. They are overseeing an army of short-term contractors who are building the computer system and marketing the new program to Connecticut consumers. At the same time, they are building a long-term structure for maintaining and staffing the system.

AHCT’s strategy for the build was to outsource as much as possible to contractors with the expertise to do things right. Now, said Peter Van Loon, chief operations officer, AHCT has to build expertise in-house to maintain systems and move forward.

By all accounts, the Connecticut rollout is a success – especially compared to the troubled federal exchange.

AHCT also has 11 memoranda of understanding with seven government agencies. The Department of Administrative Services is providing web hosting, for example, and the Office of the Healthcare Advocate is managing a statewide consumer outreach program.

Steven Sigal, AHCT’s chief financial officer, estimates AHCT will spend $19 million of the $156.3 million on marketing. In addition to traditional newspaper, radio, billboard and TV spots, the money has financed creative outreach to Spanish speakers, small businesses and young adults. The message is, “quality health insurance is now within reach.”

Workers have gone to Connecticut beaches, supermarkets, concerts and festivals to talk with consumers. They also plan door-to-door canvassing of areas with large numbers of uninsured residents. AHCT’s Facebook page is closing in on 8,000 likes and it has more than 1,300 Twitter followers. Its website (www.AccessHealthCT.com) had 476,710 visitors between its launch on Oct. 1 and the close of business on Dec. 23.

The money is well spent, said Janet Davenport, vice president for communications at the Universal Health Care Foundation of Connecticut. This is a steep learning curve for consumers.

“It’s really Healthcare 101,” she said. “There’s just a basic lack of awareness.” AHCT’s education efforts were an important reason why the rollout in Connecticut when smoothly, Davenport added.

Connecticut has solid technology and great customer service, she said. “It takes money to do all of this,” she added. “It doesn’t just happen.”

Davenport and others give AHCT high marks for transparency, including a website where meeting minutes, contracts and executive presentations are readily available (www.ct.gov/hix).

Sigal anticipates that AHCT will quickly shift from marketing to customer service. Consumers have concerns about price and the complexity of the new law; AHCT is developing a staff that has the time and patience to give them the information they need, he said.

“Dealing with that is critical,” Van Loon said. “The biggest challenge that we’re having is educating people about how healthcare works so they can be good consumers.”

The federal government initially hoped the states would share information as they developed their exchanges. Van Loon said opportunities are somewhat limited because states have taken different routes. California, for example, built its own call center while Connecticut hired a vendor. Medicaid in Colorado is managed by counties; in Connecticut it’s at the state level. Sigal said most of the sharing to date has been in the area of marketing strategies.

Gerratana said it will be important for AHCT to continue managing costs closely. She’s satisfied with the requirements in place for accountability.

“I think we’re getting our money’s worth,” she said. “Connecticut played it smart. … It’s been very successful.”

One thought on “Cost To Reach CT’s Uninsured: $156 Million”