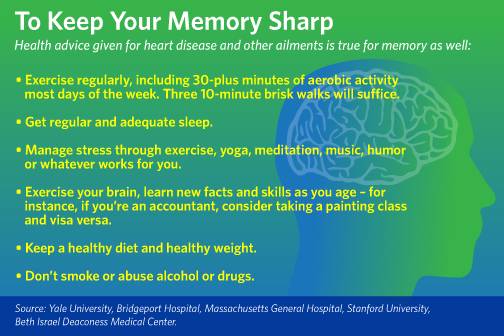 Everyone occasionally struggles to remember a name, blanks out on an appointment or forgets why they walked into the other room.

But somewhere around age 40, those “senior moments” start to take on a new seriousness. They suddenly seem like scary signs of aging, perhaps harbingers of major memory loss to come. “A few years ago, these complaints were just dismissed,” says Dr. Anne Louise Oaklander, a neurologist at Massachusetts General Hospital in Boston. Now, researchers have become interested in mid-life memory, both to understand their patients’ complaints, and because of the recognition that the seeds of dementia are laid around this time of life.

Women tend to have more memory concerns than men, and women are nearly twice as likely to die from Alzheimer’s.

It’s not clear though whether women actually suffer more memory loss than men, are more self-aware of whatever loss they do have, or are more likely to talk about memory problems with their doctor, says Stanford University neurologist and memory specialist Dr. Victor Henderson. One large Dutch study found middle-aged men and women had comparable complaints when asked about memory loss.

In both genders, normal memory begins a slow fade around age 40, when the brain reaches its maximum volume, says Dr. Philip Sarrel, an emeritus professor of obstetrics at Yale University. From then on, the brain shrinks

“We are all, including Yale professors, losing brain cells all the time,” says Sarrel who has been at Yale for a half century. “We can’t do anything about it, it’s just happening.”

For most of us, such decline is gradual, and our growing wisdom – plus a few Post-it notes and Google searches – help to compensate.

It’s this ability to adapt to memory changes that distinguishes middle age memory complaints from the dementia of old age, says Dr. Beata Skudlarska, executive medical director for geriatric and palliative care services at Bridgeport Hospital. Skudlarska says she often has to reassure the children of her elderly patients that their own memory issues shouldn’t yet be a concern.

For the most part, middle-age memory decline isn’t caused by any serious health problems, she says. Early-onset Alzheimer’s is extremely rare, as are other ailments that damage memory, like mad cow disease, HIV-related dementia and brain tumors. More common sources of memory loss in middle age include early onset Parkinson’s disease and multiple sclerosis, Skudlarska says; and virtually everyone with Down Syndrome develops dementia in their 40s or 50s.

Stress, sleep deprivation and untreated depression can also cause memory loss, she says.

Scientists are unsure whether seemingly normal complaints of memory loss in middle age are indicative of oncoming Alzheimer’s Disease. It’s well established that the brain starts to change decades before symptoms become evident, but at this point, there’s no indication that middle-age memory symptoms are an early warning sign of Alzheimer’s later in life, Henderson says.

In women, some mid-life memory loss may be temporary, tied to the biological upheaval of menopause, recent research suggests. Usually, the decline happens late in the menopausal transition, says Miriam Weber, an assistant professor of neurology at the University of Rochester in New York. “Our best data says that it does bounce back” within a few years, she says.

Henderson, of Stanford, led a new study of 643 women that found declining estrogen levels post-menopause are unrelated to memory changes. But women close to menopause who had higher levels of the hormone progesterone in their bloodstream were more likely to have good memory and thinking skills, according to the study, published online Monday (Nov. 25) in the Proceedings of the National Academy of Sciences. Henderson says more research is needed before he would recommend that middle-aged women take progesterone to boost their memory.

Experts disagree about whether hormone replacement makes a substantive difference for memory.

According to Sarrel’s studies, estrogen increases blood flow to the brain improving brain health. In one Connecticut-based study of 650 older women, virtually all scored worse on memory tests at the end of a three-year period, but the rate of decline was significantly slower in women who received estrogen – even slower than if they’d taken Alzheimer’s drugs, Sarrel says.

Estrogen also inhibits the buildup of the amyloid plaques that characterize Alzheimer’s Disease, Sarrel says. Women who have a hysterectomy to remove their uterus and don’t take replacement estrogen run a substantially higher risk of developing Alzheimer’s than women who go through normal menopause, he says.

Other researchers, like Dr. Charisse Litchman, a neurologist in private practice in Stamford, say it’s still unclear whether the risks of hormone replacement therapy outweigh the benefits. “The truth is, the jury is still out,” Litchman says.

Humorist and University of Connecticut English professor Gina Barreca has used a hormone replacement patch since her hysterectomy (“I have a song in my heart and a patch on my…”). But she says she’s not concerned about her own occasionally faulty memory.

Although Barreca, 56, of Storrs, needs to write down funny stories now to remember them – which she didn’t have to do 15 years ago – she says her memory is still good enough.

Plus getting anxious over memory loss does no one any good. “Perfectly normal people start doing Sudoku puzzles [out of anxiety], and that’s a tragedy,” she says. “The thing we should do is relax.”

Barreca prefers to focus on having fun as she ages rather than worry about what she’s losing. “I look both ways when I cross the street, but I’m not worried about living to 113,” she says. “I’ve got to live every day.”

There are a number of factors that can affect memory in middle age, including:

• Distraction – spotty attention will lead to gaps in memory.

• Loss of estrogen as menopause approaches and arrives.