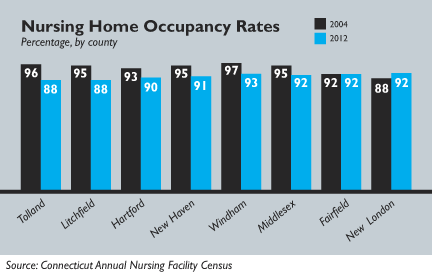 At the Governor’s House Rehabilitation & Nursing Center in Simsbury, 17 of the nursing home’s 73 beds sat empty this spring – a 23-percent vacancy rate that would have been unlikely five years ago.

The home’s occupancy has fallen despite its above-average health care quality scores in the federal government’s rating system.

“There are a lot of factors – a lot of initiatives out there now to keep people out of nursing homes,” said Keith Brown, the home’s administrator. “And with the increase in home care, we’re seeing a more frail resident population. So we have fewer residents, with higher acuity.”

The Simsbury home is not unique: Nearly a third of Connecticut’s nursing homes are less than 90 percent occupied, with Litchfield and Tolland counties bearing the highest vacancy rates, an analysis of state data shows.

Of the 68 homes with higher-than-average vacancy rates, 20 were only 60 to 80 percent occupied, leaving hundreds of beds unused. Statewide, even with the closures of 15 nursing homes since 2008, at least 2,450 beds were vacant as of May 2013.

Overall, Connecticut’s nursing home occupancy rate has tumbled in the past decade – from 93.3 percent in 2003, the third highest in the nation, to 89.8 percent, the 10th highest, according to March 2013 federal data. The latest state Department of Social Services nursing home census puts the statewide occupancy rate at just above 90 percent.

Only 11 of the 230 licensed nursing homes in the state were full to capacity as of this spring.

Nursing home administrators say the vacancy rate has been fueled by a number of factors, including state initiatives to keep more elderly and disabled residents in home and community settings, as well as the ballooning assisted-living industry, loosely regulated in Connecticut.

The state is aggressively promoting home-care options through programs such as “Money Follows the Person,” which seeks to transition thousands of Medicaid-eligible residents out of nursing homes and into community settings. State plans anticipate a reduction of 7,000 to 9,000 of the remaining 26,300 licensed nursing home beds by 2025.

In the short term, many nursing homes have seen their censuses fall and the illness acuity of their patients rise, at a time of shrinking Medicaid and Medicare funding.

“Connecticut nursing homes understand the state’s objectives, but our point is that there will very likely continue to be a strong need for high-quality skilled nursing homes,” said Matthew Barrett, executive vice president of the Connecticut Association of Health Care Facilities.

He cautioned that state policy makers should “proceed carefully and cautiously when allocating resources,” based on changing populations and projected need. State reports project that the number of people needing long-term care will rise more than 20 percent by 2025.

Once that “silver tsunami” hits, Barrett said, the state will need high-quality facilities for the portion of that population that needs skilled, long-term nursing care.

State officials note that they are making money available to nursing homes to diversify and modernize. They cite Medicaid data showing Connecticut with one of the highest nursing-home utilization rates in the country.

But whether the survival of nursing homes will be based on quality – or largely on supply and demand – remains uncertain. Some of the homes experiencing high vacancy rates have excellent federal quality ratings, while some with high occupancy rates have low quality scores. Kimberly Hall South Center of Windsor, for example, has an above-average federal rating, but was only 62 percent occupied as of May, state data shows. On the flip side, Aurora Senior Living of Cromwell was 93 percent occupied, but has a “much below-average” overall rating.

Financial concerns, hospital discharge patterns and the location of homes also are factors, long-term care advocates say.  For example, the average occupancy rate for five HealthBridge Management nursing homes that filed for bankruptcy earlier this year was 86 percent. In terms of location, there are 18 homes clustered within 10 miles of Waterbury, many with occupancy rates below the state average.

At the Village Green of Waterbury, 52 of the nursing home’s 150 beds were empty this spring – even after the facility downsized from its original 180-bed capacity.

“When occupancy rates are low, it’s a challenge to the whole building,” said Linda Garcia, the home’s administrator. “We want to keep our staff on, to make sure we can provide high quality care” to a more frail population. “At the same time, we want to remain financially viable.”

A number of nursing homes are making changes to upgrade facilities, diversify services and attract residents for short-term rehabilitation or transition-to-home stays. Some are expanding their rehabilitation offerings; others are creating more “home-like” long-term care residences.

In Fairfield, National HealthCare Associates recently completed a $15 million overhaul of the Ludlowe Center for Health and Rehabilitation that included a new rehabilitation center and private rooms. Ludlowe and two other National HealthCare homes, in Fairfield and Milford, have managed to keep occupancy at or above 95 percent, in part by providing specialty care and extensive rehabilitation services, said Diane Sullivan, director of community relations for the three facilities. Staff longevity and good relations with hospitals also are key, she said.

Occupancy rates “are a concern, given that so much is changing in the health care system,” Sullivan said. “We’re trying to adapt.”

In the New London area, Mystic Healthcare, which specializes in short-term rehabilitation, has created more private rooms and upgraded its dining services, said administrator Ken Kopchik. The home, which has seen occupancy slide from a norm of 95 percent in 2005 to below 90 percent, also is applying for state funding to create transitional beds, he said.

“We’re trying to re-invent ourselves,” said Kopchik. He noted that some assisted living facilities have stepped-up their offerings of specialized medical services, which further squeezes nursing homes.

A November 2012 report, prepared by Mercer, Inc., shows the state faces challenges in rebalancing its long-term care system and ensuring that nursing home beds are available where they are needed. Even with state initiatives in place, for example, Hartford could end up with an excess of 366 Medicaid beds by 2025, while Southington could have a deficit of 18 beds.

While no one can predict future occupancy rates, the report anticipates that most regions will have an excess of nursing home beds in coming years. The biggest glut of unused beds would be in the Greater Hartford region, with 1,109 excess beds by 2015, and 2,610 by 2025, the report says.

Barrett said low occupancy is not necessarily predictive of future viability, as many nursing homes are able to manage their staff costs to accommodate occupancy fluctuations. Still, most homes strive to keep at least 95 percent of their beds filled.

“When there’s a major initiative to move people to home care, you feel the impact,” said Brown, of the Simsbury home. “It’s something we need to deal with. We’re looking at ways to be more innovative in our care.”