After U.S. Veterans Affairs Secretary Eric K. Shinseki Thursday praised the VA’s Hartford regional office as a top performer in reducing disability claims backlogs, U.S Sen. Richard Blumenthal stood next to him and strongly criticized the entire VA, saying “we owe our veterans better than they are now getting from the VA.” 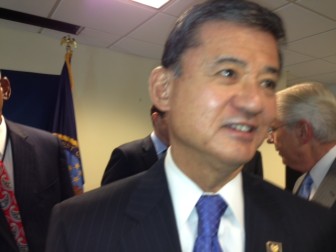 Shinseki visited the regional office where officials announced a 65 percent drop in Connecticut veterans waiting more than 125 days for disability claims to be processed since January, 2012. The VA defines waits longer than 125 days as backlogged and has a goal of no such waits by July, 2015.

Last September, the Hartford VA became one of the first offices in the country to  convert to a paperless process designed to reduce the backlog. Shinseki said all 56 regional offices should make the change by the end of this year.

“We owe our veterans everything we can do to make them to be as successful in their communities as they were in the military,” Shinseki said at a news conference at the regional office, which is located in Newington. He also visited the VA in West Haven.

But, Blumenthal, a Connecticut Democrat, called the VA system “still very much a work in progress.” He said there are “a lot of angry veterans” who complain about “seemingly endless delays.”

“Of all the problems I see in government today, this is the most vexing and perplexing,” said Blumenthal who was invited by the VA to speak at the Shinseki news conference.

Blumenthal was among 67 senators who sent a letter Tuesday to President Obama, asking him to take action to reduce the disability claims backlog.

In Connecticut, 2,628 veterans are waiting for their disability claims to be processed with an average wait of four months (122.3 days), according to VA figures released Thursday by the Hartford office. The number of veterans waiting more than 125 days in Connecticut has been reduced from a peak of 2,938 cases in January, 2012 to 1,023 now.

Nationally, as of the end of April, 796,731 are waiting for claims to be processed, with 70.8 percent waiting more than 125 days, according to VA statistics compiled by the Center for Investigative Reporting.  The average national wait is nearly 10 months, 292 days, figures show.

Shinseki said a record 4.1 million disability claims have been processed across the country in the last four years. But, the VA hasn’t kept up with the total 4.6 million claims filed in that period.  He attributed the volume to: the fact that after decades veterans are now able to file claims for Agent Orange, dating back to the Vietnam War, and for nine new diseases recognized as connected to service in Desert Storm; and claims for Post Traumatic Stress Disorder by veterans of the Iraq and Afghanistan Wars.

U. S. Rep. Rosa L. DeLauro, a New Haven Democrat, pointed out at the news conference that “the complexity of claims” has increased with succeeding wars. She said World War II veterans reported one to two disabilities, Vietnam veterans, three to four disabilities, Gulf War veterans nine to 11 disabilities, and Iraq and Afghanistan veterans, 15 to 20 “or more.”

“The increase is staggering and exponential,” she said, “we have an urgency here.”

In another effort to reduce the backlog, the VA also announced that veterans waiting the longest for disability claims to be processed will be given provisional decisions so they can start collecting benefits for up to a year before final decisions are made in their cases. After the final decisions, they will have another year to appeal.

In the letter to Obama, the senators wrote that nationally “the number of claims pending for over a year has grown by over 2,000 percent, despite a 40 percent increase in the VA’s budget.”

They stated that Congress has added funding and employees for the VA, without a resultant elimination of backlogs. “We need direct and public involvement from you to establish a clear plan to end the backlog once and for all,” they wrote.