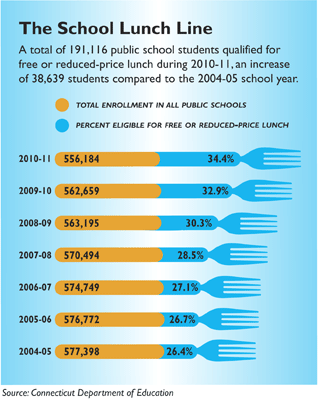 What do some of the wealthiest communities along Connecticut’s “Gold Coast” in Fairfield County have in common with the poorest towns in rural Windham County?

Both counties include a growing number of families relying on federally funded free and reduced-price school meals to feed their children during tough economic times.

Hunger among school-age children in Connecticut is on the rise and experts do not expect the trend to change soon given the state’s 9 percent unemployment rate and sluggish economy. “Children in Connecticut are hungry,” said Susan Maffe, president of the School Nutrition Association of Connecticut (SNACT) and director of Food Service for the Meriden public school system. “We know of children who come to school on Monday whose last meal was probably the lunch they ate at school on Friday.”

“Childhood hunger is impacting school districts across the board in urban, rural, even wealthy communities,” said Therese Dandeneau, an education consultant with the Connecticut Department of Education’s school nutrition programs.

Among the evidence of childhood hunger in Connecticut:

Long-term health improves, too, with studies showing that “girls who participate in at least one federal nutrition program have better weight outcomes than girls who don’t,” she said.

Among those lacking good nutrition are children who have access to food but remain malnourished. “This is a group of students we tend to forget about,” said Susan Fiore, nutrition education coordinator with the state education department. “We want students to successfully navigate the school system and achieve their full potential. But children who are hungry or malnourished can not function at their peak capacity.”

A total of 191,116 students were eligible for free or reduced-priced lunch during 2010-11. Free or reduced-price meals are served to students whose family income is at or below 130 percent (free meals) or at or below 185 percent (reduced-price meals). The U.S. Department of Agriculture through the Connecticut education department partially reimburses local school districts for free, reduced-price and paid meals. But some school districts have trouble getting qualifying families to register for free and reduced meals so schools can be reimbursed.

Connecticut educators and school nutrition experts cite a depressed economy as the driving force behind the rise in childhood hunger, although 2009 criteria changes that automatically certify recipients of the Supplemental Nutrition Assistance Program (SNAP or “food stamps”) for free and reduced-priced school lunch account for some of the increase.

“One of the first things to go is the food budget,” said Donna Grant, executive director of the Thompson Ecumenical Empowerment Group (TEEG) that operates a food bank and provides summer meals and breakfast to thousands of children each year. TEEG serves communities in Windham County, considered the state’s least “food secure” county in 2011 by the Connecticut Food Bank because residents do not have consistent access to enough food.

“Two adults working full-time at $11 an hour still cannot meet the basic needs of a family of four,” said Grant. “Entry-level jobs in this area have dried up. People who are unemployed remain out of work and those with entry-level positions see little opportunity to change their status.”

Grant suspects the number of children receiving free or reduced-price school meals represents only a fraction of those in need because pride keeps some families from seeking help. “Many people in rural communities are vulnerable because they are land-rich and cash-poor,” she said. “They would never want to expose themselves as not being able to care for themselves.”

Even towns in Connecticut’s affluent counties – such as Fairfield and Litchfield – are dealing with increased childhood hunger due to the economic downturn, experts said. For example, 13.2 percent of students enrolled Greenwich public schools are eligible for free and reduced-priced meals, up from 7.5 percent since 2004. In Norwalk, 43.2 percent of all students are eligible, up from 23.1 percent. In Litchfield County, school districts serving Goshen, Warren, Washington, Roxbury and Bridgewater have seen their numbers increase.

“We’ve seen instances in wealthier school districts where both parents have lost their jobs and have no income to maintain expensive homes and high mortgages,” said Dandeneau. “They’re asking for help” to fill out forms for free and reduced-price school meals.

Programs For Those In Need

A variety of summer programs – from open feeding sites where youngsters can get meals to issuing families additional SNAP funds to supplement their food budget – decrease the risk of “food insecurity” among families when school is out of session, said Dandeneau.

A federal pilot program helping families in Litchfield and Windham counties as well as Waterbury and surrounding communities supplement their summer meals has proven successful. “People think of the cities as having the most need,” said Nolan. “But there’s a lot of rural hunger and eastern Connecticut has significant needs.”

Local participation in the federal breakfast program remains a challenge even though the number of schools offering breakfast increased by 14 percent from last year, said Crayco. Only 61.5 percent of Connecticut schools that offer free and reduced-price lunch also offer breakfast, according to End Hunger Connecticut! School districts are also missing out on millions of dollars from the federal government that would be available if they served breakfast.

“Breakfast is a tool, just like textbooks, to help students learn,” said Crayco.

“It’s ironic that we tell students to eat breakfast and get plenty of sleep when there’s a big test,” noted Nolan. “But what about all the other days? Offering students breakfast can make a difference each and every day.”

A top aim of the “Connecticut No Kid Hungry” campaign is expanding the federal school breakfast program by adding 84 schools and 2,025 students this school year. State funds are available to assist schools that want to offer breakfast. “So far, we’ve added 45 schools and have exceeded our goal of reaching an additional 2,025 students,” said Crayco.

Some schools hesitate to offer breakfast because of “perceived obstacles” concerning operational costs, student supervision and interference with the school day, said Dandeneau.

For Maffe, the benefits of implementing a breakfast program outweigh the challenges.  “School districts that offer breakfast report decreased absenteeism and fewer trips by students to the nurse’s office. Students are more attentive,” said Maffe, director of Food Service for Meriden, where 66.6 percent of the student body is eligible for free or reduced-price meals. This year, the district began serving free breakfast to all students at the Casimir Pulaski Elementary School, with plans to expand the program to other schools soon, she said.

One thought on “Childhood Hunger Rises Even In Wealthy, Rural Towns”