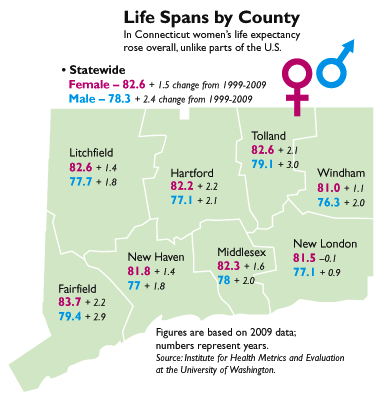 It’s one of the most disturbing trends in American public health: women’s life spans are shrinking in many parts of the U.S., and no one knows why.

Women’s longevity took an unprecedented nosedive during the past decade, researchers recently discovered, with their life expectancy tumbling or stagnating in one of every five counties in the country.

The last time life expectancy fell for a large number of American women was in 1918, due to Spanish influenza.

While many scientists believe that smoking and obesity are driving the downward spiral, a growing chorus of experts contends that chronic stress may be a key culprit, too – especially the stress of juggling work and family. “It’s a hypothesis at this point, but a reasonable and plausible one,” said James S. House, a professor at the University of Michigan’s Institute for Social Research. Women may have gained work opportunities over the last four decades, he said, but society has done relatively little to help them support their increased responsibilities.

“Clearly, obesity and smoking are things that contribute to chronic disease and reduced life span,” said Carolyn Mazure, director of Women’s Health Research at Yale, which funds interdisciplinary research on gender differences in health. “There is really no question in my mind that stress plays a role in that algorithm, especially for women. ”

Life expectancy studies show that women’s projected life spans have declined or stagnated in 662 counties — more than 20 percent of the 3,198 counties in the U.S. — between 1999 and 2009. The largest declines are in parts of the South, Appalachia and the southern portion of the Midwest.

Even in counties where women are living longer, their extra years are often marred by chronic diseases or disabilities, says Chloe Bird, a senior sociologist at the Rand Corporation.

The projections for women are in stark contrast to changes in American men’s life spans, which had downturns in only 167, or 5 percent, of the nation’s counties, according to a study by the Institute for Health Metrics and Evaluation (IHME) at the University of Washington.

But within the state, there are differences. Life expectancy for women in Fairfield County is the highest in Connecticut — 83.7 years, which is a longer life span than the national average, and more than two years longer than that of Windham County (81 years).

The troubling national trends have led to examinations of known mortality factors, such as smoking and obesity — with a newer focus on the role work/family stress plays in heightening those risks for women.

At Harvard University, Lisa Berkman, director of the Center for Population and Development Studies, says challenging social conditions in the U.S. have created a “perfect storm” that can damage women’s health. Not only did women flood into the job market over the past few decades, she notes, but the number of single parents skyrocketed. Despite these major changes, the U.S. has created few policies to help women handle child care. As a result, there are “extreme stresses even on the relatively advantaged,” she said.

Job stress can be particularly damaging for employees who hold jobs with rigid hours and high demands, such as clerical, administrative or production work, researchers have found. When Berkman studied women stressed by work and family conflict, she found they had more medical issues than other working women. She looked at women who worked in elder care facilities, comparing those who had rigid and flexible job schedules.

Women with rigid schedules were twice as likely as women with more flexibility to have at least two risk factors for cardiovascular disease, such as high blood pressure, high cholesterol, being overweight or smoking, Berkman found.

Another study by Harvard professor Michelle Albert concluded that women with all sorts of demanding jobs were 38 percent more likely to have strokes, heart attacks or cardiovascular problems, compared to women with less demanding work.

“Chronic stress may promote earlier onset of chronic diseases,” said Elissa Epel, an associate psychiatry professor at the University of California in San Francisco, who helped discover that such stress wears down telomeres, the protective tips of chromosomes, which have been linked with longevity. “Chronic stress speeds up the aging clock.”

Some studies suggest that women are more likely than men to soothe themselves by eating, Bird said. They may also be more likely to reduce exercising, so they can fulfill their work and family obligations, she said.

Work/family demands also can increase the amount of stress hormones surging through women’s bodies, Bird says. Women do not experience the same decline in stress hormones as men during lunch breaks or after work, since they often use these hours to deal with family issues.

Stress can affect health in two distinct ways. There may be physiological changes, due to excess stress hormones, like cortisol. But it also may cause women to change their
behaviors, cutting out such healthy activities as exercise, or indulging in smoking or overeating.

Mazure, of the Yale School of Medicine’s center on Women’s Health Research, was among a cadre of researchers who began studying the impact of stress on women’s health in the 1990s. Even as studies have shown that stress is closely tied to depression, cardiac disease and other chronic illnesses in women, “we know a fraction of what there is to know” about gender differences, she said.

Among the ongoing studies at the Yale center is one examining gender differences in the neurobiological pathways involved in smoking — an attempt to explain why nicotine replacement therapies used for quitting have not been as effective for women as for men.

Overall, American women were extending their life spans at a much slower pace than women in foreign countries, even though the U.S. was spending much more than other countries on medical care.

The National Research Council became so concerned about these international health trends that it convened a 15-member panel to examine seven possible risk factors, including smoking, obesity, social inequality, and the nation’s health care system.

Last year, it concluded that smoking played a major role, accounting for 78 percent of the life expectancy gap between American women and those from industrialized countries in 2003. American women began smoking later than men, which experts say may explain why women are now suffering from more smoking-related illnesses. Obesity also played an important role, the panel concluded.

Shortly after the report was completed, Berkman, who served on the panel, said she realized the committee had made a glaring omission.

“It hit me like a sledgehammer,” she said. The panel had not evaluated the impact of work stress, let alone work-family stress, on life expectancy. Now, Berkman is leading a new study, funded by the National Institute on Aging, which explores the effects of stress on women’s health and possible interventions.

Berkman doesn’t think it’s a coincidence that American women began suffering from more health problems after they entered the workforce in greater numbers. As American women began working more after World War II, their fertility remained the same, as did the paucity of work-family accommodations.

That’s a contrast to some European countries, where women received more government support to deal with their dual roles or decided to have fewer children. In France, where females have the second highest life expectancy in the world, childcare options are plentiful, and women with three or more children are eligible for up to 24 weeks of paid maternity leave. In Italy, where female life expectancy also remains high, the fertility rate has dropped in recent decades.

Both Berkman and House acknowledge that smoking and obesity clearly hurt female life expectancy. But they say they may be consequences of women’s stress – not the primary driver of what’s harming women. House’s current research suggests that smoking may explain only about 10 to 25 percent of women’s health decline.

Support for this article came from the MetLife Foundation Journalists in Aging Fellows program, a collaboration of New America Media and the Gerontological Society of America.

To view the FOXCT report on this story click here.

One thought on “Women’s Longevity Falling in Some Parts of U.S., Stress May Be Factor”