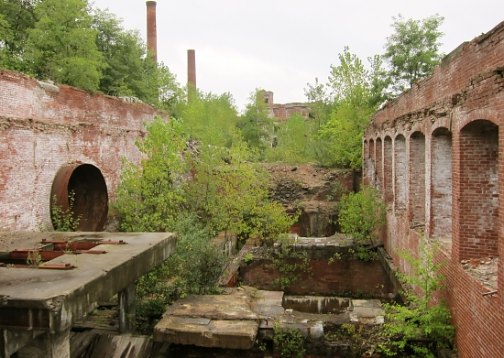 Nearly every Connecticut community is laced with sites tainted by contaminants like lead, mercury, asbestos, PCBs, or petroleum.

These sites, mostly vacant and abandoned, were once bustling gun, textile or hat mills, car repair shops—even the neighborhood dry cleaners – that employed locals and kept the economy sizzling.

Since 1994, close to $60 million has been spent by the U.S. Environmental Protection Agency to help rid communities of these so-called brownfield sites, including close to $12 million for removing or containing pollutants.  But to date only 19 have been completely cleaned and the cases closed, according to the EPA, hardly making a dent in a vast inventory estimated to be in the thousands. The shuttered mills or buildings on these brownfield sites pose a host of public safety issues for municipalities that must ensure that they are secure.  Over the years, many have been set on fire, some more than once, spewing toxins into the air, ground and nearby rivers.

Local officials have worked tirelessly recruiting developers and searching for seed money from the federal and state governments to get brownfield sites back on the local tax rolls.

But progress has been slow, often taking years.

A review of the EPA’s efforts in Connecticut found:

• Sites that get assessment money – to determine the extent of the pollution – often wait years to get cleanup funding.  That adds time to a process that’s already lengthy because of the meticulous cleanup of these contaminated sites.

• The state, not the EPA, is responsible for overseeing all cleanups. That’s because there is no federal standard for what constitutes a cleanup, leaving states to set their own rules.

• Connecticut, in turn, delegates most of its authority on cleanup projects to private engineers, who are rarely fully audited—something critics say weakens project oversight.

In Connecticut, federal and state money has spurred some major success stories, such as the Brass Mill Center mall in Waterbury, which turned 90 contaminated acres into a 1.2 million-square foot shopping center; Bridgeport’s Harbor Yard sports arena; and the Killingly Commons, a big-box retail complex in the east.

Gov. Dannel P. Malloy has pledged $50 million over two years to identify and clean brownfield sites – with a promise to continue funding. The EPA, which budgeted roughly $170 million nationwide this year, offers help to states, cities, towns and regional partnerships to get projects moving with grants, loans and other funding.

Experts say the new state money and programs are signs of progress. But they remain wary about the way the money is spent and monitored. Recently, in Seymour, how a $200,000 state loan for a brownfield project is being spent has drawn fire from town officials.

There are also concerns about the environmental and public health impact of leaving the majority of sites dormant.

“There are so many chemicals in our society, and having these highly toxic sites is clearly a hazard and needs to be taken care of,” said Roger Reynolds, senior attorney at the Connecticut Fund for the Environment, an advocacy group. “That said, we’ve struggled over the past 30 years or so with how expensive that is and how difficult it is.”

Economic development – especially revitalizing poor, blighted communities—is what drives the brownfield program in Connecticut and other states. Most communities secure a developer, and then go to the state and the EPA for funding to support their project.

“It’s not one versus the other,” said Graham Stevens, the brownfields coordinator for the state Department of Energy and Environmental Protection, in discussing the balance between economic and environmental issues.

“I think economic development is an excellent catalyst for environmental remediation,” added Stevens, “The brownfields projects, at the end of the day, are real estate transactions and real estate projects, and if the development has no likelihood of success, that process will likely not result in a cleanup. The cleanup will have to come at another time through other means.”

While there isn’t enough money to clean up every parcel, Stevens said the state is trying to help educate local officials about what’s available, so they can take advantage of any opportunity.

DEEP officials decide whether they want the state to maintain control of site cleanup or whether to pass it to a licensed environmental professional, or LEP. About 80 percent of brownfields are managed by LEPs, Stevens said. Connecticut, Massachusetts, New Jersey and Ohio use a similar system.

The state has to sign off on work by LEPs, and can reopen a case within 24 months if there are concerns about the work. That process worries environmentalists, who fear shoddy cleanups won’t be discovered until after the two years is up.

Stevens defended the system, saying that the state has the right to take the oversight role back if there are problems, and the right to audit. If an engineer does bad work, he said, the state can report him or her to the state board that governs LEPs, asking for censure or revocation of their license.

But that system is “largely by and for the LEPs,” Reynolds said, something environmental advocates would like to change.

“Carrots and sticks have to be part of every incentive system,” he said. “Hopefully, you can do 90 percent of it with carrots, but you’ve got to have the sticks.” In Shelton, local and regional efforts have paid dividends, securing more than $1 million in EPA grants. Along Canal Street a farmer’s market and new apartments and condominiums look out at the Housatonic River, on sites that once housed a corset factory, an asphalt plant and other industry.

“This is not full circle—it’s 180 degrees from what it was,” said James Ryan, president of the Shelton Economic Development Corporation.

The Valley’s regional approach also scored big in this spring’s EPA grants: the Valley Council of Governments received $750,000 for assessments and cleanups for more than half a dozen sites.

Waterbury received almost $1 million, part of an EPA pilot project to allocate evaluation and cleanup money at the same time—a move that Valley officials hope helps solve the disconnect between the two steps that they say has been a major source of delays.  VCOG administers the Regional Brownfields Program for 19 communities, including Waterbury.

VCOG has built a niche by offering a one-stop shop for its small cities and towns that might not have the time, money or expertise to put together grant proposals or recruit developers.

“We look at ourselves as putting deals together,” said Rick Dunne, VCOG’s director.

Entering Sprague, twin smokestacks from the mammoth Baltic Mills complex loom over the town and Shetucket River.  The mill, once one of the nation’s largest producers of textiles, is now a fenced-off sprawl of weeds, crumbling brick and fetid water. In 1999 at the Baltic Mills complex, children trying to free a tied canoe inside one of the buildings set it on fire, spewing asbestos roofing and pipe materials as far as six miles away.  After the fire, the EPA conducted an emergency cleanup, removing the asbestos from the site and the neighborhood.

Fires have also erupted at shuttered mills in Plainfield, Somers and Waterbury.

Osten estimates it will cost about $1 million to clean the contamination from the 58,000-square-foot structure that sits on the 16.5-acre brownfield site to prepare it for development.

She’s confident that she can tap into EPA and state grants and loans—if she can find a developer.

In the meantime, Osten worries about what’s on the site, which the town owns after a foreclosure.

“It’s pretty much a public safety issue,” she said, noting that the building’s floors are rotted through and there are other physical hazards in addition to the contamination. That’s typical of a brownfield site, she said.

“Often, these canals that are around the mills have water in them that are very attractive to younger people,” she added.

The Environment vs. Development

But Stevens maintains that if people are staying off abandoned land, in most cases whatever contamination is there is probably not much of a danger. Oil tanks—or pools where solvents and other chemicals were poured out—are often buried. Airborne contaminants largely stay put unless the dirt is stirred up, he said.

Cleanups that encapsulate dirty soil, instead of removing it, or otherwise seal off pollution are an effective way to manage problems, Stevens said.

“Someone once told me, you can’t have risk without exposure, and I don’t think that’s something that the general public grasps,” Stevens said. “If you’re not eating it or inhaling it or drinking contaminated water and it’s managed appropriately and it’s not going anywhere and you’re confident that it will stay that way, that’s an effective cleanup.” Brownfields in general are less dangerous than other types of environmental hazards, such as Superfund sites, said John Pendergrass, a senior attorney at the Environmental Law Institute.

But even if a government agency knows what the old factory or store was used for, it’s not always certain what’s in that soil or water. The unknown factors are a big deal in a brownfield-heavy state like Connecticut, said Pendergrass.

“There’s a possibility that’s there’s something much more risky that’s sitting in a community where people don’t know what the risks are. A lot of brownfields are abandoned. That doesn’t mean that people aren’t using them,” he said. “It means that they’re using them in uncontrolled ways, and people can be exposed to the hazardous substances.”

Wasted Places is a collaborative investigation by six nonprofit newsrooms into federal and state programs designed to cleanup and redevelop polluted tracts known as “brownfields.” The project was coordinated by the Investigative News Network. To read the national story click here.

One thought on “Toxic Sites: Hazardous, Hard To Develop”