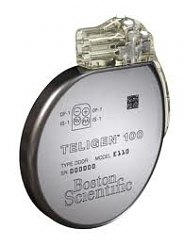 Hundreds of thousands of women at risk for irregular heart rhythms have a battery-powered, iPod-sized gadget embedded in their chests. The implantable cardioverter defibrillator (ICD) can be a lifesaver, shocking a dangerously fast heartbeat back to normal.

Yet the actual benefit to women is uncertain, because ICDs were approved by the Food and Drug Administration (FDA) based on clinical trials made up mostly of men.  That’s typical of testing of many high-risk devices, according to medical reports. And even in the clinical device trials that do include women, generally the outcomes aren’t reported by sex.

The result is a critical gap in the data doctors rely on when making decisions about a treatment’s benefits and risks for women. It can also pose troubling dilemmas later on, said cardiologist Rita F. Redberg, a professor of medicine at the University of California, San Francisco. That was the case in 2009, when data pooled from clinical trials showed that ICDs were no better than drugs at reducing a woman’s risk of death.

“The time to collect data in both sexes is before FDA approval,” said Redberg. “Especially with implanted devices, where there’s no going back.”

Only recently has the FDA proposed guidelines to improve the representation of women in clinical device trials. Intended for the medical device industry, which sponsors most of the research submitted for review, the guidelines are expected to become final by year’s end. Similar standards for drug testing were put in place some 20 years ago, following a long period during which women of childbearing age were explicitly excluded from most studies.

The proposed FDA guidelines are nonbinding, however, and some experts who favor the new recommendations are skeptical that the medical device industry will comply.

“Industry is always most attentive to the bottom line,” said Christine Carter, vice president for scientific affairs at the Society for Women’s Health Research (SWHR) in Washington, D.C. “So companies will continue to lament that trials are expensive and that recruiting more women is a problem.” Device makers will change their study protocols just enough to meet FDA requirements, Carter predicted, but protocols will be “less than ideal for those of us concerned with sex differences and women’s health.”

SWHR and other groups have urged the FDA to strengthen the document by finalizing it as a rule. The debate highlights the competing interests that the agency struggles to balance, with industry and some lawmakers in one camp, demanding faster approvals and “less burdensome” regulation, and health advocates in another, warning that patient safety is at risk.

To U.S. Rep. Rosa DeLauro, the issue is science, not politics. “We know there are real medical distinctions between genders that must be recognized when the government is deciding whether to approve a new device,” she said.

Opening A Window On Women’s Health

Until the mid-1980s, clinical trials were practically a men’s only club. Studies funded by the National Institutes of Health (NIH) and pharmaceutical firms—the largest contributors to biomedical research in the United States—drew subjects primarily from a pool of white males. The first randomized trial using estrogen to prevent heart disease consisted entirely—and counter-intuitively—of men.

Women were considered too complicated to study, given their cycling hormones and the chance that those of childbearing age could expose a fetus to unintended risk, said SWHR’s Carter. Gender wasn’t yet recognized as a factor in health and illness, and it was assumed that study results in men would be just as useful for women.

As biomedical research advanced, however, women began to suspect that their health needs were being left behind, experts say. The results of clinical trials in men weren’t always extended to women, depriving them of powerful new treatments like cholesterol-lowering drugs, according to an Institute of Medicine report. And the male model didn’t always correspond to women’s experience of health and disease.

In the early 90s, women’s health advocates began to mobilize, according to Carolyn Mazure, director of Women’s Health Research at Yale. “They took it to Congress,” she said, educating key legislators about the exclusion of women from medical research and the lack of information about gender differences related to health.

In 1993, Congress passed legislation requiring that women and minorities be included in all NIH clinical research. The FDA reversed its policy barring women of childbearing age from certain drug studies, encouraging their inclusion in all clinical drug trials. The measures also required study results to be analyzed by sex.

As an NIH researcher at the time, Mazure witnessed history in the making. “The idea that we now needed to include women and minorities in our research—we found it revolutionary,” she recalled. Her program at Yale promotes research on gender differences in health by providing seed money to get innovative projects off the ground.

In the past 20 years, scientists have discovered that sex differences are significant at every stage of life and at every biological level, from the single cell to the whole body. Gender influences how people experience disease, metabolize drugs, respond to pain, and much more. While the findings support the need for sex-based research, the going is slow, said Carter.

“There’s still only 30 percent—maybe up to 40 percent—of women involved in clinical trials, and too often their data isn’t analyzed separately from men’s,” she said.

A major challenge is changing the mindset of researchers, she said.  She described how, at a recent SWHR roundtable with more than a dozen Alzheimer’s disease experts, she had asked about the sex differences they had found in their research. Almost all responded that they hadn’t looked at the data that way.

“We’re finding this over and over, with experts in different fields,” she noted. “If you’re not aware that there are biological differences between the sexes, you don’t look for it in your data.” With each roundtable, however, she convinces more scientists to look at outcomes based on sex. “It’s time to make this more mainstream,” she said.

In the meantime, the effects of the old mindset are still in evidence: in one example, women account for just 30 percent of subjects in the clinical trials supporting the American Heart Association’s 2007 guidelines for cardiovascular disease prevention in women. Twenty of the 156 studies were men-only, according to a published gender analysis of the studies from which the guidelines were drawn.

The paucity of women “wasn’t a big surprise,” said Dr. Chiara Melloni, assistant professor of medicine at the Duke Clinical Research Institute in Durham and lead author of the analysis. But it’s a reminder to design studies with gender differences in mind, she said.

Bringing Device Studies Up To Speed

If the FDA’s device center has been slow to tackle the gender gap, its new guidelines are a prescription for change, agency officials say.

In a key provision, researchers are advised that men and women should be enrolled in proportions that reflect the gender distribution of the underlying disease. Cardiovascular device studies, for example, should enroll men and women in equal numbers, since each sex is equally at risk for the disease. Until now, most such studies have included just half as many women as men, according to an FDA review of cardiovascular devices approved in a recent five-year period.

Since medical device studies have traditionally been small, the new enrollment goals will likely require more women, and possibly bump up the number of subjects overall. The guidelines provide strategies for recruiting female subjects, and advice on examining data for potential differences by sex. And they call for sex-specific outcomes to be reported on device labels, a practice that consumer health groups have been advocating for years.

In practice, the vast majority of medical devices reviewed by the FDA are cleared for use without human testing, if they are deemed “substantially equivalent” to devices already on the market. Only 1 percent of devices undergo rigorous review and clinical trials before they can be marketed.

Even so, the new guidelines for device trials are an important advance, experts say. Dr. Patrice Desvigne-Nickens, a program director at the National Heart, Lung, and Blood Institute, praised the FDA for alerting device makers to the new imperative in clinical research. “To not look for gender differences is unacceptable,” she said.