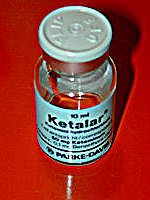 Researchers at the Yale School of Medicine have called it “the magic drug,” able to halt severe depression and suicidal thoughts in patients within a matter of hours.

Ketamine—used as an anesthetic in human and veterinary medicine—has emerged in the past few years as a promising, rapid-acting antidepressant. When administered intravenously at low doses, it can lift symptoms of deep depression within hours, for seven to 10 days. Typical antidepressants, which act on the neurotransmitter serotonin, take a month or more for full effect.

As recent studies have confirmed ketamine’s effectiveness, researchers are now testing the drug on two conditions that have defied medicinal magic: PTSD and alcohol addiction.

“The findings so far on ketamine [as a fast-acting antidepressant] have been very consistent. The question now is, where do we go with this?” said Dr. John H. Krystal, chair of the Yale School of Medicine’s Department of Psychiatry and chief of psychiatry at Yale-New Haven Hospital. “The research is moving in two directions: In what settings would we most want to get people better quickly—and how do we extend the benefits of ketamine” beyond one-dose experimentation?

As part of this stage of study, researchers at Yale, the VA Connecticut Healthcare System, Mount Sinai School of Medicine and other institutions are pursuing early indications that ketamine may have some benefit for post-traumatic stress disorder and alcohol addiction.

At New York’s Mount Sinai, Dr. Dennis Charney and colleagues are testing whether a single dose of ketamine can reduce core symptoms of PTSD, a debilitating anxiety disorder that afflicts an estimated one in five combat veterans returning from Iraq and Afghanistan.

“Better treatments are needed for PTSD because of the seriousness of the disorder, and available treatments are generally only partially effective,” said Charney, dean of the Mount Sinai School of Medicine and a leading neurobiologist, formerly at Yale. Only two drugs have been FDA-approved for treating PTSD—Zoloft and Paxil—and neither is effective in a majority of patients.

Ketamine works on the glutamate pathway in the brain—a different mechanism than selective serotonin reuptake inhibitors (SSRIs) such as Zoloft and Paxil.

Four years ago, researchers from the US Army Institute of Surgical Research reported that ketamine given during surgery to soldiers returning from Iraq and Afghanistan with burns on their bodies had an unexpected effect: Those who received the drug had a lower prevalence of PTSD than soldiers who did not.  For those receiving ketamine, the prevalence of PTSD was 26.9 percent, versus 46.4 percent for those not receiving ketamine.

“Although traditional thinking has been to associate ketamine administration with increased incidence of PTSD, these results question that relationship,” the Army researchers said. “In fact, it seems that ketamine may decrease the prevalence of PTSD in the combat burned patient.”

Ketamine caught the attention of psychiatrists more than a decade ago, when researchers at the Connecticut Mental Health Center discovered that the drug, in low doses, appeared to give patients quick relief from depression. In 2006, a study by the National Institute of Mental Health [NIMH] confirmed that 70 percent of patients with treatment-resistant depression experienced rapid symptom relief with a single intravenous dose of ketamine.

While none of the patients had serious side effects, NIMH researchers cautioned at the time that ketamine was unlikely to become a widely used treatment for depression because of potential side effects, including hallucinations, at higher doses. In the 1990s, ketamine emerged as a popular street drug, known as “Special K.”

In recent years, Yale researchers have mapped the mechanism by which ketamine works:  It blocks the N-methyl-D-aspartic acid (NMDA) receptor, operating on the glutamate pathway in the brain in a way that appears to restore synapse connections that may have deteriorated under stress and depression. By blocking one glutamate receptor, the drug actually causes a release of glutamate by other receptors and appears to increase the neuroplasticity of the brain.

“The studies we’ve done suggest that [ketamine] changes the morphology of the brain, after it’s out of your system,” said Dr. Gerard Sanacora, director of the Yale Depression Research Program. While glutamate is the most abundant neurotransmitter in the brain, he said, it has not been studied extensively until very recently.

Now, a number of drug companies, as well as academic institutions, have seized on the glutamate system to test new antidepressant medications. One of the drugs being tested by Yale researchers is Riluzole, which is FDA-approved to treat Lou Gehrig’s disease but has shown benefits in treating depression. Pfizer, AstraZeneca and other companies are testing other drugs that modulate glutamate.

Ketamine, which is sold as a generic and under the brand names Ketalar and Ketaject by Pfizer, is the subject of multiple trials.

“As of right now, the initial studies are promising in concept. But in terms of bringing ketamine to clinical practice, we still have some important unanswered questions,” such as whether repeat doses work over time, Sanacora said. On the other hand, he said, if glutamate-altering drugs are shown to be effective, “they could be available fairly quickly. We could be looking at a new class of drugs in the next five years.”

Ketamine also has drawn interest from researchers studying alcohol addiction—largely because of findings indicating that the drug’s negative effects are blunted, and positive effects more pronounced, in people with a family history of alcoholism.

Researchers at Yale and the West Haven VA are now conducting a study to gauge the effects of ketamine on mood and alcohol consumption in patients who suffer from both depression and alcohol dependence.

“Our hypothesis is that it might work particularly well on depression” in patients with both conditions, and that it also might “reduce cravings,” said Dr. Ismene Petrakis, chief of psychiatry for the VA Connecticut Healthcare System and principal investigator on the study. “The thinking is that alcohol is a little like ketamine, so if you drink for many years and you’re blocking your NMDA receptors, your body might compensate.”

A prior study led by Petrakis indicated that underlying alterations in NMDA receptors may make some people less likely to get the “warning signs” to stop heavy drinking, the study suggested.

“If there’s some underlying problem with NMDA receptors [in people with alcoholism], ketamine might be something that can address that,” Petrakis said.

Krystal, of Yale, who began studying ketamine in relation to schizophrenia in 1989, said some hospitals and psychiatric facilities are now administering the drug on a “compassionate use” basis, when all other antidepressant treatments have failed. In Houston, for example, doctors affiliated with the Ben Taub General Hospital and the Baylor College of Medicine are giving ketamine to severely ill patients who have not responded to any other treatment.

A pilot study by Yale researchers found that a low dose of ketamine “rapidly reduced” suicidal thoughts in 20 patients who showed up in the emergency room with severe depression and suicidal ideation. A second study, by NIMH researchers, had similar results.

But more important than the drug itself, ketamine researchers said, is understanding more about the way it works.

“I think it is a great drug to tell us about the [glutamate] mechanism, but we have to wrestle with whether it’s the best drug for depression,” especially given dosing questions and the risks of abuse, Krystal said. “We view it still mostly as a research tool.”

Charney said the ketamine PTSD study was underway, and it was too early to discuss results. Just last month, in another indication that the two FDA-approved drugs for treating PTSD were lacking, the Army announced plans to launch a multi-year study to evaluate the effectiveness of a range of medications that are being prescribed “off-label” to treat PTSD.

Krystal and other researchers already have found fault with one off-label drug: In a study published last summer, they determined that the antipsychotic risperidone, widely prescribed for PTSD at veterans’ hospitals, did not reduce the overall severity of military-related PTSD. The research has raised broader questions about the practice of prescribing atypical antipsychotics in PTSD treatment.

On the other hand, recent research has shown potential benefits of a drug called D-cycloserine (Seromycin), which is a partial blocker of the NMDA receptor. One study found that D-cycloserine reduced fear and anxiety in patients who were receiving exposure therapy—a technique used to treat PTSD.

As more veterans return home with PTSD, researchers say science needs to catch up—quickly. Krystal and others are hopeful that glutamate might be a new frontier.

“One of the challenges we have in the PTSD field is that there has been so little study of medications,” Krystal said. “As prevalent as [the disorder] is, there is just not much research out there. That has to change.”