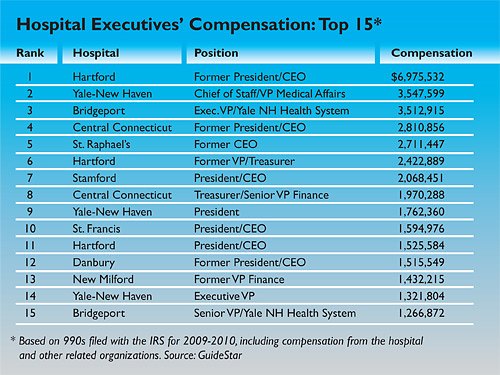 The health care system may be ailing, but newly compiled data show that compensation for top executives at Connecticut hospitals remains healthy.

Eighteen executives at the state’s 30 hospitals made more than $1 million in 2009-10, according to information the hospitals reported to the Internal Revenue Service. More than a third of these 18 – seven – were stepping down from their posts, and retirement benefits helped drive compensation across the board.

Hartford Hospital’s outgoing chief executive officer, John J. Meehan, was the highest paid in Connecticut and one of the highest paid nationally. His compensation totaled $6.98 million – all but $1.1 million of it nontaxable and retirement benefits, according to the hospital. The median compensation for the highest-paid position at each hospital in Connecticut was $678,000, according to a C-HIT analysis. Half had compensation above that figure and half were below.

When the group is expanded to include the top five executives at each hospital, the Connecticut median falls to $320,000, according to data provided on selected hospitals by GuideStar, a source of nonproft information.  Nationally, the median was $260,000, GuideStar’s data on 10,674 top executives at selected hospitals shows.  Compensation across all industries tends to be higher in Connecticut because of the higher cost of living here.

Among the highest paid executives nationally was outgoing president and CEO of the Hackensack University Medical Center in New Jersey, according to GuideStar. He made $7.3 million. The data show that only a handful of executives across the country made more than $5 million.

A few executives had significant “non-reportable” compensation in addition to W-2 and 1099 pay. The outgoing president at William Backus Hospital in Norwich had $2.2 million in deferred compensation related to his retirement, for total pay of nearly $3 million, according to a C-HIT analysis of the data.  The chief operating officer at the Hospital of Central Connecticut had $472,443 in reportable pay and $838,880 in other compensation, for a total of $1.3 million.

Executive pay has provoked fiery debate for years. The controversy is expected to intensify because of the unprecedented financial pressures facing the health care industry and the rising costs of medical care.

“I don’t understand what the hospitals are getting for their money. Some of the highest paid are the worst performing,” said Ellen Andrews, executive director of the Connecticut Health Policy Project in New Haven. “The system isn’t working for anyone – for the state, for the hospitals or for consumers.”

Others say the compensation reflects the complexity of the health care business, keen national competition for good leaders, and the uncertain future that executives face when they sign on for top-level positions in an industry undergoing enormous change. Pay needs to be competitive to attract and retain key executives – even for nonprofits that are struggling to find their place.

“Hospital executives are responsible for extremely complex organizations,” said Michele Sharp of the Connecticut Hospital Association. In addition to managing advanced medical services and technology, a skilled staff and extensive physical plants, hospital CEOs are often responsible for an array of services beyond the hospital, such as primary care clinics, home health organizations and surgery centers.

They work in a highly regulated environment and must comply with demanding standards in areas that range from patient safety and financial performance to institutional stability and community health, Sharp said.

“When you bring in exceptional talent, you can manage effectively and efficiently,” said Vin Petrini, senior vice president for public affairs at Yale-New Haven Hospital. “It’s a very complicated and complex industry. We need to be thoughtful about how we manage and retain and recruit talent.”

“What we’ve really focused on is a more efficient way to manage,” he said, adding as an example that Yale-New Haven, with more than 15,000 employees, has created some high-level posts by combining key positions across the hospital and the health system.  He and others emphasized that for most executives, compensation is not take-home pay.

Petrini said compensation for the two highest-earning Yale-New Haven executives included funds that accumulated over their careers, but that had to be reported to the IRS when they vested. The two weren’t actually paid those amounts during the year. “In a sense, it gives a false impression,” Petrini said.

Total compensation for Yale’s executive vice president for strategy and system development was $3.5 million, for example – but base compensation was $589,204, according to information filed with the IRS.

Rebecca Stewart, a spokeswoman at Hartford Hospital, said compensation for departing executives there was largely nontaxable and retirement benefits.

“Hartford HealthCare is a not-for-profit health system and our focus is on patient care, not profit,” she said. Experienced, expert leaders who can improve patient care and quality in the face of diminishing resources become even more important and difficult to find, Stewart said. She said boards must set compensation at levels that attract qualified leaders who can improve services and quality of care in a cost-effective way.

“The jobs are both risky and demanding. Financial incentive is one way to attract people to such difficult jobs,” Stewart said. “These executives are asked to lead the way in the midst of enormous change and, again, diminishing resources.”

Stewart said it’s important to remember that the leaders of Hartford HealthCare help to run one of the largest teaching hospitals and tertiary care centers in New England, a community tertiary hospital and two acute-care community hospitals.

At the Hospital of St. Raphael in New Haven, departing CEO David W. Benfer’s $2.7 million in compensation included several one-time payments related to his retirement. Media relations manager Liese Klein said executive pay is set with the help of an outside adviser who provides recommendations based on a review of hospitals of a similar size and complexity. The hospital takes seriously its responsibility to ensure that executive compensation is reasonable, she said, and pay and benefits are reviewed regularly for appropriateness.

The challenging health care environment has already sparked a spate of mergers and new affiliations for hospitals across the state. Eight of the state’s 30 acute-care hospitals lost money during 2010-11, twice as many as the year before.  (Read related story here ).

Smaller hospitals, in particular, are struggling with shortfalls in government reimbursements for Medicaid and Medicare patients.

As for the large number of outgoing Connecticut hospital executives in 2009-10, it was apparently a blip. In 2010, the state had the fourth highest turnover rate for hospital CEOs – 28 percent, according to the American College of Healthcare Executives. Its most recent report puts the rate at 14 percent.

In 2008, a state task force assessed the financial health of Connecticut’s hospitals and singled out government reimbursements as a key problem. The task force also considered the impact of executive compensation on the bottom line. It found that compensation grew 95 percent between 2002 and 2006, but said the increase in pay and benefits accounted for only 2 percent of the rise in healthcare costs during that period.

Growth in pay and benefits for health professionals – excluding physicians – accounted for a combined 53 percent of the increase. “Competitive tactics in recruiting nurses and other health professionals occur at significant cost to hospitals,” the task force said. (To view the report click here.)

The Connecticut data include all reportable W-2 and/or 1099-MISC compensation for the hospital and related organizations as reported by hospitals on their 990s for 2009. For most hospitals, the filings cover 2009-10.

GuideStar, the leading source of nonprofit information, provided the hospital 990s for this report.

One thought on “Eighteen Hospital Executives Earn Over $1 Million”