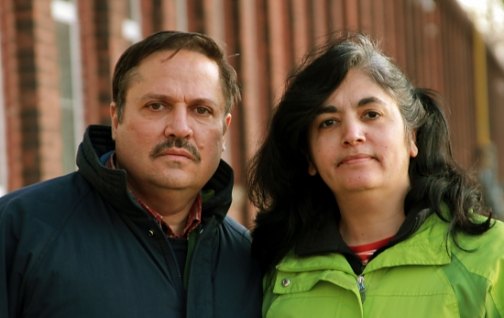 Andy and Miriam Miranda don’t fit the historical profile of homeless veterans. Former teachers with master’s degrees who have a six-year-old son, they have lost a house to foreclosure and were evicted from an apartment for falling behind on rent. Last year, the family spent six months living in a New Haven homeless shelter.  They now reside in a West Haven rental, thanks to a federal subsidy program for homeless veterans.

Homeless veterans have long been predominately single males, typically Vietnam War vets with mental health or substance abuse problems.  Now, a growing number of veterans with spouses and young children, many returning from deployments in the Middle East, are changing the face of homeless veterans in Connecticut and across the country.

“Whether the communities of Connecticut are prepared for them is another question,” said Linda S. Schwartz, commissioner of the state Department of Veterans Affairs.

Nationally in 2010, the VA saw 4,383 veterans’ families in its homeless programs—an 86 percent increase over 2009, according to a VA report on homeless veterans.

Veterans advocates say the statistics don’t capture the need, noting that veterans often are reluctant to seek help because the military places a high value on self- sufficiency. Returning veterans are up against a tight economy and a scarcity of transitional housing for veterans with families, with a growing number of them women with children, said Christopher McCluskey, director of forensic and veterans’ services at the Community Renewal Team (CRT) of Hartford.

CRT is under contract with the VA to run a new program designed to help very poor veterans attain housing stability and serve most communities in Hartford, Middlesex and New Haven counties, called Supportive Services for Veterans Families (SSVF).

McCluskey said veterans have added challenges to securing jobs and housing, including health issues, post-traumatic stress disorder, traumatic brain injuries, and “just the trauma that comes out of wartime.”

Maynard, of the VA, noted that of the 600 Connecticut National Guard soldiers who returned from Iraq in November, 2010, about 30 (five percent) had no home to go to.

Of veterans’ families who have sought housing help from the VA, Maynard said many live in cramped apartments with other families. They include young mothers escaping domestic violence, men who have lost construction jobs, or veterans whose unemployment benefits have run out.

Josheka Womack, an Army veteran and mother of a four-year-old girl, said without her mother’s help, she and her daughter would be homeless. Womack, her daughter, her four siblings and a nephew live in her mother’s apartment in Bridgeport.

Womack, 29, who has an associate’s degree in finance, came back from Iraq in 2004.  Since then, she has ricocheted from her own apartments in Bridgeport to living with her mother, while engaging in fruitless job searches and taking job-training courses.  The salary she made while in Iraq paid for her first apartments, and now she finally sees a chance for housing stability.  In the fall, she started working the overnight shift at the Stamford Post Office, where veterans are given hiring preference.

“I love the Post Office,” said Womack, adding that she is worried because the distribution center where she works has been threatened with closure.

Margaret Middleton, executive director of the nonprofit Connecticut Veterans Legal Center, called Womack “smart and hardworking—and unfortunately, an incredibly compelling example” of how the economy has been “devastating for veterans trying to care for families.” The center helped Womack in a dispute with one of her landlords.

A new transitional residence for homeless female veterans with young children opened in Bridgeport in November.  To date, only four women have moved in so far, none with children, said Joy Kiss, executive director of Female Soldiers/Forgotten Heroes, which runs the home.  The residence can house 15 women with children, with a maximum age of two years old.  Kiss said that the age cut-off may be limiting applicants, but “being a new program, we wanted to start slowly.”

She said the agency is doing outreach and networking to boost occupancy. “Women are different from men,” she said. “It’s harder to find them.”

Another transitional residence for homeless women veterans is planned in Norwalk by Heroes Village, a for-profit group, according to Sean Richardson, co-founder.  He said it hasn’t yet been decided whether it will accommodate women with children. “The architect is trying to figure out a way to configure the space so children can be housed there as well,” said Richardson, of the site which is a former VFW Post.

Schwartz said the VA is transitioning from focusing mainly on homeless single men to also serving more women and families.  “People in the business of providing for the homeless have known for a long time that women veterans with children are an underserved population,” she said.

“The difference is, there are many more of them than there were in the past, and it is growing every day.”

The Mirandas, who both served on U.S. bases, are among those new faces of homeless veterans.  Their most recent jobs were as substitute teachers. They travel by foot, bus, train or bike to advocate for their son, who has Asperger’s syndrome, at his school, volunteer at the VA hospital, attend support programs—and in Andy’s case, to take paralegal and other courses.  Miriam, 46, was an Army nurse from 1990 to 1993 and would love to get a paying job at the VA. Their apartment is subsidized by the federal HUD-VASH program, established in 2009 to get homeless veterans into housing and provide counseling from the VA.

Maynard said 315 HUD-VASH rental vouchers have been awarded to Connecticut veterans so far, and an additional 75 were recently issued to the state.  The SSVF program, which started last fall, provides subsidies to low-income veterans for expenses such as rent and utilities, assists them in obtaining benefits from the VA and other programs, and provides case management to help families attain housing stability.  It also helps family members of veterans, including those widowed or divorced.

The VA has contracted with 85 social service agencies throughout the country to run the SSVF program, including CRT in Hartford and Veterans Inc. in Worcester, Mass., which works with Friendship Service Center in New Britain and other agencies throughout New England.

Kimberley Wilson, an SSVF case worker at the Friendship Center, said the agency already has seen high demand. While her agency’s goal is to assist 90 veterans in the first year, she said case workers already had seen more than three-dozen people just two months into the program. In December, the VA announced it was adding another $100 million in grants to the original $60 million allocated to the SSVF program nationwide.  New Haven, Hamden, West Haven, North Haven, Meriden and Waterbury are among the communities served by the Friendship Center.

Advocates say foreclosures remain a key threat to veterans’ housing security. The U.S. House of Representatives passed a bill which would extend foreclosure protections for spouses of military members who die while serving, but the Senate has not yet acted on it.

Both the Veterans Legal Center and the state attorney general’s office have assisted veterans faced with foreclosure. Schwartz herself administers a small emergency fund, financed by private donations, which she uses to help veterans pay rent or buy food.

While housing security is a larger problem in Connecticut, Wilson and other advocates say it is especially compelling for veterans, some who have served multiple tours in Iraq and Afghanistan.

“I don’t think veterans who sacrifice for us should come home and be homeless,” she said.

One thought on “VA Seeing Spike In Homeless Vets With Families”