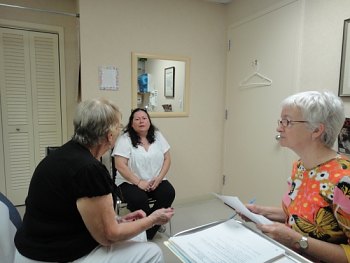 Juana Pecunia, (at left) speaks through her interpreter, Glenda Wagner, as her doctor listens.

At 81, Juana Pecunia is an impeccably manicured and coiffed woman who still drives herself to the market, but she can’t go to the doctor without her daughter’s help.

This day she is seeing Dr. Kathleen LaVorgna, a Norwalk surgeon who performed a double mastectomy on her five years ago. LaVorgna quizzes Pecunia about a battery of symptoms.  Each word LaVorgna says is translated into Spanish by Pecunia’s daughter, Glenda Wagner, who then translates her mother’s answers into English for LaVorgna. That back and forth doubles the length of the appointment, but it doesn’t increase the amount Medicare pays the physician.

Since emigrating from Argentina, Pecunia has learned a fair bit of English. But she does not trust her language skills for conversations as exacting and important as those between patient and doctor. “I want to know … ” Pecunia says, then pauses for the right word. “Everything,” she finally adds with a smile.

Quality health care relies on patients and doctors communicating well, but in Connecticut medical interpretation is not covered by public or private insurance. In 2007 the state extended coverage for face-to-face professional interpreters for all Medicaid patients and estimated its cost at $4.7 million yearly, half of which would be reimbursed by the federal government.  But the program has never been funded in the state budget, so none of the services promised under the law have ever been delivered.

Racial and ethnic minorities face huge health disparities, and numerous studies cite language barriers as contributing to poor outcomes. This is why the federal government, professional associations and health care advocates agree that non-English speaking patients have the right to an interpreter.  Interpretation services are costly and paid for by hospitals, clinics and individual doctors. The services offered vary greatly. In many cases, family and friends do the interpreting, which eliminates cost but can lower quality.

Endorsing interpretation without funding it is meaningless, according to LaVorgna, a former president of the Connecticut State Medical Society, which advocates making interpretation billable. “Talk is cheap,” she said.

Actually, it’s not.  Hospitals spend millions on interpretation, while small practices struggle to provide it using contractors whose hourly rates can be higher than the fees charged by physicians.

“Whether the government pays for it or not, you have to meet the patient’s needs,” said Hospital of St. Raphael Director of Quality Improvement and Patient Relations Jim Judson. “One word wrong could produce a medical error.”

St. Raphael’s spends between $40,000 and $80,000 annually on interpreters, said Judson. Hartford Hospital’s costs climbed from about $70,000 in fiscal year 2008-09 to $85,000 in 2009-10, according to spokesperson Michaela Donnelly. Yale-New Haven Hospital spends more than $1 million, according to Lynn Cermola, manager for patient relations, though she declined to give a specific figure.

Yale invests so much in interpretation in part because it performs sophisticated procedures such as organ transplants, said Cermola. “The people who come here have a very complicated medical history. We can’t afford margins for error,” she said.  Yale employs 14 full-time interpreters and hires vendors who either send interpreters to the hospital or provide videoconferencing or telephone interpreters.

“Many hospitals don’t have the resources we do,” Cermola said. “I think this is an issue the state needs to grapple with on a lot of levels.” Advocates continue to ask the state to fund interpretation.

“You don’t go home because something got passed,” said Patricia Baker, president and chief executive officer of the Connecticut Health Foundation, which pushed for the Medicaid funding.

The foundation continues to work to “preserve the promise,” said Baker. But given the deficit that hung over budget deliberations, she had no expectation that 2011 would be the year funding became available.

Title VI of the Civil Rights Act mandates interpretation at any medical facility that takes federal funding. That includes nearly all hospitals and community health centers. More than 80 percent of the physicians in the state are in private practices that do not take federal funds.

LaVorgna often asks patients to bring along an English-speaking friend or relative to appointments.  She would prefer professional interpreters, with an in-depth understanding of medical terminology and the nuanced skills of translation. But at $75 an hour including travel, the cost usually exceeds what she’s paid for an office visit.

LaVorgna describes her appointment and treatment of Pecunia as “the best situation’’ she’ll see in family interpretation.  Wagner, a pharmacy technician who understands medical terminology, lives upstairs from the mother and can recite Pecunia’s list of medications.  Born in the United States, Wagner is equally fluent in English and Spanish.

In contrast, LaVorgna has another patient who relies on an 18-year-old granddaughter for interpretation. ”I know she’s not giving the full question,” says LaVorgna.

LaVorgna also sees a woman from Bangladesh, whom she perceives as angry, based on body language and terse answers. But without good interpretation or guidance in the patient’s culture, she’s never been able to get to the heart of what is bothering her patient. This frustrates LaVorgna, who calls that kind of communication “part of making a person well.”

Interviews with providers and patients around the state revealed vast differences in the quality of interpretation. The issue is a growing one, with 148 different languages spoken by children in Connecticut public schools and a Latino population that has increased 50 percent in the past decade.

Language barriers contribute to the health disparities that persist in racial and ethnic minorities, even as the health of the general U.S. population improves. “There is a strong relationship between the quality of interpretation that is provided to limited English proficiency individuals and the quality of care that is delivered,” said Dr. Garth Graham, deputy assistant secretary for minority health at the U.S. Department of Health and Human Services.

“I know it is a problem,” said Denise Rivera, who coordinates a breast cancer support program for the Hispanic Health Council. Women frequently have no idea of the side effects they’ll experience with chemotherapy, Rivera said. She’s also seen teenage daughters act as interpreters and, in one hospital, a Portuguese-speaking nurse called upon to translate for Spanish speakers.

All the hospitals interviewed for this story use at least some telephone interpretation. These pay-per-minute services provide a translator for the patient via telephone. “In person is always a good thing,” said Patti LaMonica, director of emergency services and clinical services at St. Francis Hospital.

But telephone interpretation is often the quickest option to get services for patients who speak unusual languages, especially in an emergency, she said. When the Connecticut Multicultural Health Partnership polled community health centers, all the responding institutions used some telephonic interpretation.

Felicia Diaz, of the Naugatuck Valley Project, a Waterbury-based social action group, said that her friends don’t like to use telephone interpretation because “you don’t know who’s on the other end.” Women often complain that they come up with additional questions after the call has ended, said Rivera.

Does good interpretation save money? There hasn’t been enough data collected to prove that, according to Ann Bagchi, a researcher at Mathematica Policy Research who studied the issue for the Connecticut Health Foundation.

The research on quality, however, is clear. “If care can be better, it’s kind of shortsighted to say: We’re not going to make this investment,” said Bagchi.

So just how good does interpretation have to be – practically and legally? There are federal guidelines about the proficiency of interpreters, but according to Mara Youdelman, an attorney with the advocacy group National Health Program, enforcement is rare.  Many patients don’t know their rights or are afraid to complain because of their immigration status, she said.

Standardized training for interpreters would raise quality, said Graham of HHS. Maritza Rosado directs a program that trains medical interpreters at the Eastern Area Health Education Center in Jewett City. “Anyone can say they are bilingual,” said Rosado. Even fluency in conversational speech does not do the job. “A person may not be equipped to understand medical terminology,” she said. For interpreters who complete her 40-hour training, Rosado encourages continued study for national certification.

“Even though we’ve been active for five years, a lot of people out there don’t know (about their interpretation rights),” Diaz said. “On top of it, people don’t have confidence.” Diaz works with The Naugatuck Valley Project to do role-playing exercises with Latino women to empower them to insist on an interpreter.

When Wagner drops her mother off and returns to work, her bilingual abilities will come into play again. Spanish-speaking customers come into the pharmacy where she works with questions about their prescriptions. “They won’t even know what the medicine they’re taking is for,” she says. Fortunately, her own mother never has to visit a doctor without language help.

Wagner and Pecunia leave the surgeon’s office hand-in-hand. The exam has gone well, and LaVorgna clarified some of the finer points of Medicare coverage for mammograms, which will help Wagner schedule her mother’s next test.  “Everything’s good,” Pecunia declares.

One thought on “Interpreters: Need Grows But No Funding In CT”