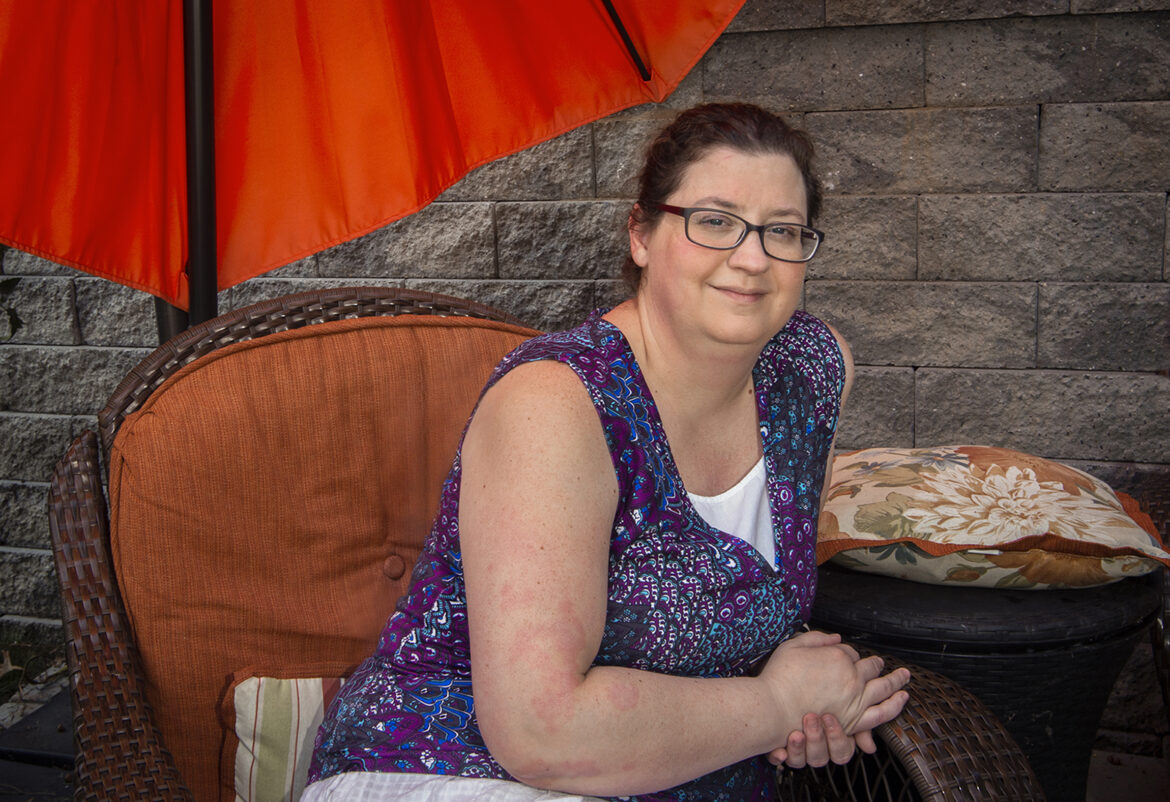 Bridget Phelan-Nelson was diagnosed with Tourette syndrome at 16. She isn't shy about discussing her condition with co-workers.

As a fifth grader growing up in Stratford, Bridget Phelan-Nelson used to shout the same string of obscenities every morning. “I would repeat it over and over on my walk to school so I wouldn’t say it at school,” recalls Phelan-Nelson, now 39. She also had multiple motor tics throughout middle school and high school, including a nose twitch that earned her the nickname “Bunny.”

Even though motor and vocal tics are telltale signs of Tourette syndrome, a neurological condition characterized by involuntary, repetitive motions and sounds, Phelan-Nelson wasn’t diagnosed with Tourette until she was 16 years old.

“The thing most people don’t understand about Tourette is that you can hold it back for some time, but if you don’t do it, it’s going to hurt,” she said. “It’s like the itch you can’t reach at the bottom of your foot, and it pesters you until you scratch it.”

An August study by the Centers for Disease Control and Prevention (CDC) found that 1 in 50 school-age children have some type of tic disorder, including Tourette syndrome. In addition, boys are three times more likely than girls to be diagnosed.

Tourette syndrome is widely considered to be underreported in children in part because tics can go unrecognized. The CDC estimates that only half of the children who meet the criteria for Tourette have a formal diagnosis.

But doctors nationwide have reported a spike in young patients presenting with tics during the pandemic, including teenagers who have developed intense, complex tics, often after watching TikTok videos with the hashtag #tourettes. Instead of being diagnosed with Tourette, most of these teens —mostly females— have what’s known as a functional neurological disorder, where tic-like movements spread within a group.

“There was a rise in tics during the peak of the COVID pandemic, exacerbated by stress and anxiety of the unknowns, and compounded by isolation and the lack of socialization,” said Dr. Elizabeth Ng, a pediatric neurologist at Connecticut Children’s.

“Tics may be underreported due to lack of education on Tourette syndrome,” she said.

Tourette syndrome made headlines recently when Grammy Award-winner Billie Eilish, 20, opened up about her childhood diagnosis. Ng says tics may be underdiagnosed in children if a physician is not familiar with the diagnostic criteria for Tourette syndrome, which includes having motor and verbal tics for at least a year before age 18 that are not due to a medication or other medical condition.

This may be changing thanks to several factors, including increased awareness about Tourette and mental health issues in general and greater media exposure.

“More individuals have become aware that there is such a thing as Tourette syndrome, and when they talk to their pediatrician, it can be confirmed,” said Dr. James Leckman, the Neison Harris Professor of Child Psychiatry, Psychiatry, Psychology and Pediatrics at the Yale School of Medicine.

As an account manager in the employee benefits department of an insurance company, Phelan-Nelson is not shy about talking about having Tourette with clients and coworkers. “It helps because the more I talk about it, the more they will understand and the less likely they will stare at me if I am having a bad day,” she said. Phelan-Nelson has not taken medications besides medical marijuana, which helps control her verbal tics and was approved for use in Tourette patients in Connecticut in 2019.

Tourette typically begins with simple, subtle movements like eye blinking in children between 5 and 7 years old and slowly becomes more severe, peaking before the teen years. Despite its portrayal in popular media, coprolalia (shouting obscenities) is rare, affecting only 10% of people with Tourette, according to the Tourette Association of America (TAA).  “In the majority of cases we see, the worse ever tics are at 10, 11, 12, and gradually get better,” Leckman said. “They wax and wane; some individual’s tics completely disappear, but a majority of people I follow still have some tics over time.”

Medical experts are quick to point out that Tourette presents with a constellation of symptoms. Among children diagnosed with Tourette, 83% have been diagnosed with at least one additional disorder, including Attention Deficit Hyperactivity Disorder (ADHD), behavioral problems, anxiety, learning disabilities, depression, and autism spectrum disorder, according to the CDC. Research suggests that boys with Tourette are more likely to have ADHD, while girls are more prone to mood disorders. “At least in my experience, girls and women who are experiencing tics probably have more vulnerability to anxiety and depression than boys do,” Leckman said.

Although there is no cure for Tourette syndrome, many people control their tics with prescription medications and a form of cognitive therapy called CBIT (Cognitive Behavioral Intervention for Tics), which has become a first-line treatment since it was introduced a little over a decade ago.

Treating tics is usually not particularly tricky in and of itself; what’s more challenging is addressing the comorbid psychiatric conditions which often co-occur, says Matthew Specht, director of Connecticut OCD, Anxiety, and Tic Specialists and clinical associate professor at Weill Cornell Medicine.

“There are tons of kids, male and female, who have a significant number and frequency of tics who don’t have co-occurring challenges, and they do just fine,” he said. “The presence of additional conditions complicates treatment. We can treat the tics, but we shouldn’t view the successful treatment of tics as a remedy for these other often more debilitating conditions.”

Given that Tourette is often not diagnosed until children’s symptoms become more pronounced, there is often a lag in treatment, says Specht. “Most of these kids won’t be thoroughly evaluated or treated until age 10. The good news is that it’s not too late, but it’s more challenging,” he said.

“Every study has shown that early intervention yields the best long-term outcomes.” He added that “showing children how to effectively manage their symptoms can unlock potential they didn’t realize they had.”

For this reason, it’s common for doctors to recommend that children with Tourette find and focus on activities they enjoy doing, like music or sports. “Building on the child’s strengths and interests is something I focus on rather than focusing on problems and issues,” Leckman said. “In the long run, this will probably be the thing that makes the biggest difference.”