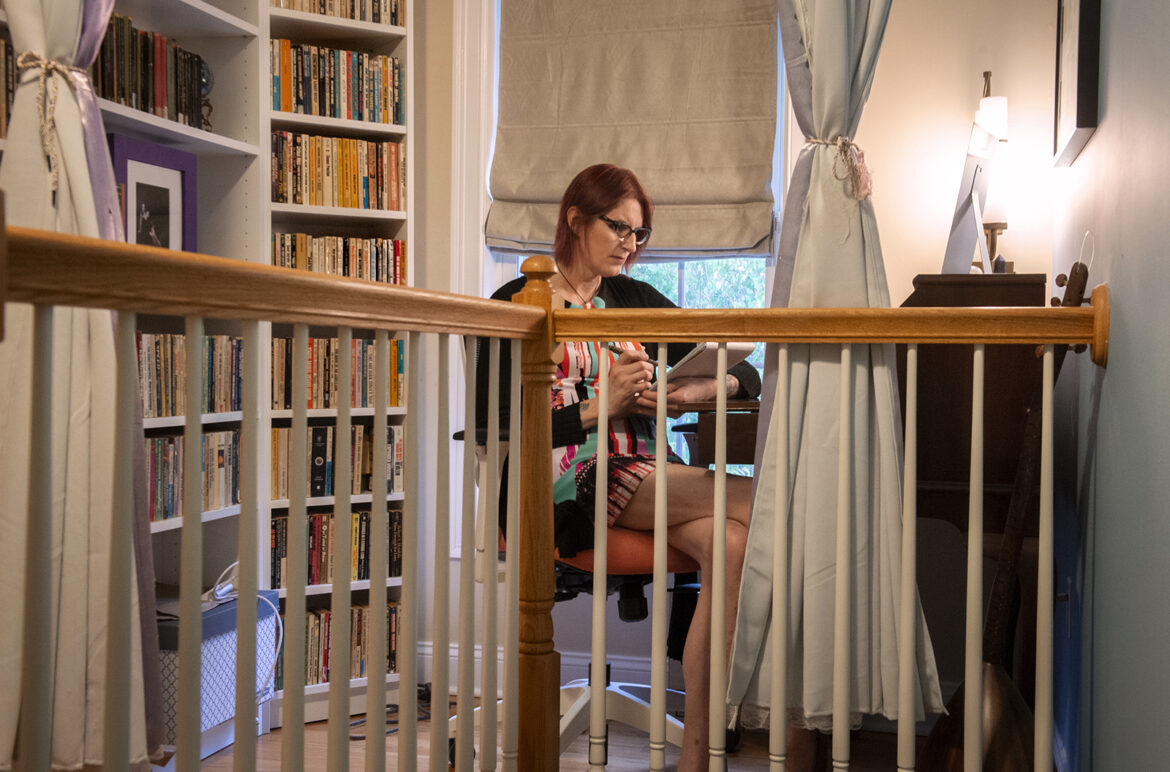 Lillian Maisfehlt received help with her insurance coverage appeals from the Office of Healthcare Advocate.

Since coming out as transgender in 2015, Lillian Maisfehlt has spent $10,000 on electrolysis and had voice and hormone therapy and breast construction. She also spent 10 days in Pennsylvania recovering from vaginoplasty, an operation that few surgeons perform for transgender women in Connecticut.

Maisfehlt, 47, of Chester, said the pain, cost and occasional fights with her insurance company for reimbursement have been worth it.

“Each step has made me feel a little bit more like myself,’’ Maisfehlt, a librarian at Gateway Community College in New Haven, said. “I’m Lillian. That’s who I am because of the work I did.”

Maisfehlt received help with her insurance appeals from Jill Hall, a nurse consultant at the state Office of the Healthcare Advocate, and has benefitted from changes in state and federal laws that require coverage of gender-affirming surgery that advocates say is “life-saving” for many transgender people.

Medicaid and Husky regulations require the surgery to be covered if deemed medically necessary to treat gender dysphoria—the often-severe psychological distress that can result from an incongruence between one’s sex assigned at birth and their gender identity.

A 2013 bulletin from the state Department of Insurance and a 2020 declaratory ruling by the state Commission on Human Rights and Opportunities blocked insurance companies from categorically denying insurance coverage for gender-affirming care.

But insurance companies can still make case-by-case decisions on that coverage. Self-funded insurance plans, such as those used by some Connecticut cities and employers, don’t have to comply with state regulations governing gender dysphoria treatment, said Paul Lombardo, director of the state Department of Insurance’s Life & Health Division. However, he said they must comply with federal labor laws.

Medical providers and advocates for transgender people say there are too many loopholes and limited access to gender-affirming surgery in Connecticut. Connecticut providers have sent patients to Boston, New York City, Philadelphia, Colorado and California because they are unaware of surgeons in the state who perform phalloplasty for transgender men.

The shortage of trained surgeons is a national problem, and recruiting one is a long-term goal at some health networks, including Hartford HealthCare’s new Center for Gender Health in Hartford, said Dr. Laura Saunders, its director. She said the need is great.

Britta Shute, an advanced practice registered nurse in endocrinology at Transgender Medicine Services at UConn Health, said traveling out of state for genital surgery can be “detrimental” for some patients.

“That becomes a problem for people who have limited incomes,” she said. “I’ve had quite a few patients who have not been able to have the surgery because of the distance.”

Katy Tierney, an endocrinology specialist and medical director of the Middlesex Health Center for Gender Medicine and Wellness in Middletown, said some of her patients have paid thousands of dollars upfront for gender-affirming surgery while appealing insurance company denials. “I can’t overstate how lucky we are that we’ve had the work of the Connecticut TransAdvocacy Coalition to make sure that trans rights are baked into our state policies,’’ Tierney said. “But the state only has control over so many things. There are loopholes that insurance companies can get out of … and high-deductible plans are brutal for patients.”

“There’s this weird morass of insurance rules that make it incredibly difficult to actually access the surgery, let alone one’s preferred surgeon close by,’’ he said.

Still, Young, a transgender man, said he has seen tremendous progress in the past two decades. A 2020 ruling by the U.S. Supreme Court that the Affordable Care Act bars discrimination against transgender people put many concerns to rest, he said.

“I transitioned two decades ago, and bias in health insurance was far worse than we see now,’’ he said.

Medicare, Husky and many insurance companies follow widely accepted guidelines from the World Professional Association for Transgender Health (WPATH). Husky, for example, covers genital construction surgery for transgender patients if they are at least 18, have been diagnosed with gender dysphoria and have undergone hormone therapy for at least a year. It also requires evaluations from two mental health professionals and documentation that the person has completed at least a year of full-time, real-life experience in the new gender.

“While some people do see them as barriers, I think they provide guidance in an area that can sometimes be very murky,” she said. In her basement creative space, Lillian Maisfehlt plays guitar and does collage art.

But Young said the evaluations can be costly for transgender people who can’t afford appointments with doctors or therapists. He is vice president of the Jim Collins Foundation, a nonprofit named for a late New Haven teacher that provides grants to transgender patients who can’t afford gender-affirming surgery.

Connecticut residents turned down for coverage can file complaints with the state insurance department, which may conduct an external review, or the state healthcare advocate, which can represent people for free in insurance appeals.

Treating gender dysphoria is complicated, and many transgender people do not want surgery. Christy Olezeski, PhD, the director and co-founder of the Yale Medicine Pediatric Gender Program, said some choose a social transition with a name change, new pronouns or new clothing or hairstyles. Some seek hormone treatment while others choose surgery on their Adam’s apple, face, voice, chest or genitals, she said. “Every individual decides for themselves what would be the best way to align their body or their appearance to their identity,’’ she said.

She said some patients want surgery because their dysphoria has caused depression, anxiety or discomfort. Transgender adults in the U.S. have significantly higher rates of suicidal thoughts and attempts than general population, according to the Williams Institute at UCLA. The 2015 U.S. Transgender Survey found that 40.4% reported attempting suicide at some point in their lives and 7.3 percent reported attempting suicide in the past year.

That means surgery can be life-changing for some patients. “Once you feel more congruent and whole within yourself, it adds meaning to one’s life,” Saunders said.

“Having noticeable facial hair and presenting in every other way as female marks me as different,” she said. “There are people—even in this state—who are not OK with that and could use violence, given the rhetoric in politics today.”