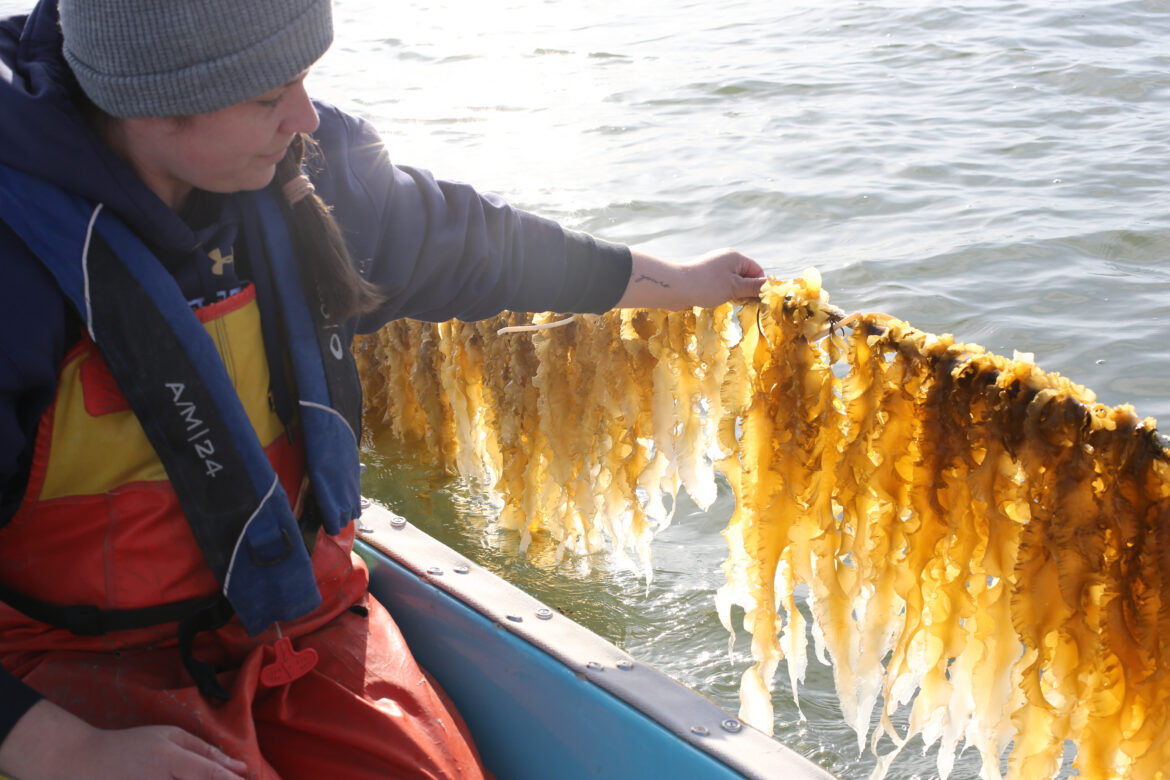 On a gray morning in late April, Suzie Flores, 40, the owner of Stonington Kelp Co., hustled out of her hybrid Highlander in a Westport parking lot. She grabbed a couple of coolers of freshly harvested Connecticut sugar kelp from her SUV, then dashed to the rear entrance of a posh restaurant to deposit 60 pounds or so of seaweed. Because the weather was breaking—for the better, for once—she hoped to hightail it back to Stonington to help her husband, Jay Douglas, work his barge on the Pawcatuck River before their weather window closed.

But the half dozen or so people cultivating kelp in Connecticut are a hearty lot, determined to grow the state’s seaweed crop to a respectful place alongside farmed clams, mussels and oysters in Connecticut’s $30 million aquaculture industry, according to the Connecticut Department of Agriculture reports.

Flores, her peers and a handful of researchers, entrepreneurs, academics, scientists and chefs believe Connecticut kelp can bolster the state’s economy and might help heal the environment in the process.

In 2016, Flores and Douglas bought a small marina in Stonington and moved their young family into a fixer-upper across the street. The hyper-seasonal nature of marina work—kayak rentals, a bait and tackle shop, moving boats to and from neighboring Watch Hill—left an open window in wintertime.

Flores did some investigating. About a decade ago, lobstermen and scallop farmers in Maine began growing kelp in the winter because the growing schedule complemented their summer work, and they already had the necessary gear to harvest. While Flores was intrigued, kelp’s nutritional and environmental benefits sealed the deal, she said. Kelp is one of the most nutrient-dense foods on Earth, with an alphabet full of vitamins and minerals from A to zinc and more calcium per ounce than milk.

Like plants growing on land, kelp uses sunlight for photosynthesis, absorbing carbon in the process. Kelp also removes nitrogen and phosphorous from water, making it nature’s water purifier. A study by the National Oceanic and Atmospheric Administration in February found that shellfish and seaweed farms remove about 575 pounds of nitrogen per acre. Kelp is a zero-input plant, which means it doesn’t need land, fresh water or added fertilizer to grow. Sugar kelp’s translucent amber ribbons provide a hideout for marine life, which generate all the fertilizer the kelp needs. Suzie Flores delivers sugar kelp harvested on her ocean farm near Stonington to a Westport restaurant.

Flores connected with GreenWave, a Connecticut-based nonprofit committed to regenerative ocean farming, which helped her navigate the Connecticut Bureau of Aquaculture’s 18-month permit process. Farmers here say that timeline is speedy compared to other states, where permitting can drag on for years. GreenWave helped Flores set up her farm, supplied her with seeds and connected her with buyers.

Each fall, Flores sets out with a contingent of scuba divers to forage wild kelp beds in the Atlantic Ocean for sorus tissue, or reproductive tissue, for seed. Last fall, divers couldn’t find any sorus tissue in the usual spots. Due to climate change, warmer waters had chased wild kelp beds further east into the Atlantic. “We took the divers out as frequently as they needed to go. We were just trying to see if there were sources that we were missing,” Flores said. Eventually, they located spores, but the delay affected the entire growing season.

Foraged spores are sent to a nursery of sorts in New Haven. There, at GreenWave’s hatchery on the Quinnipiac River, spores are released into giant fish tanks, where they attach themselves to a special kind of kite string. After a month or so of growing in the nursery, seeds emerge—tiny kelp blades about a millimeter long. The fuzzy-looking seed strings are spooled around PVC pipes, then transported in coolers to farms throughout southern New England. At sea, farmers unfurl the kite string onto ropes suspended several feet deep between two moorings. The kelp grows downward and can reach more than 10 feet before being harvested.

Setting these lines, or outplanting, usually happens around Thanksgiving. But last year’s delays meant that Flores and Douglas spent New Year’s Eve bundled up on their boat in the Atlantic, setting the half-inch-thick roping.

“Every week that you have to wait to outplant your farm is a week’s less growth,” Flores said. “Shortening the amount of growth can mean the difference of a couple of thousand pounds.”

Each pound removes substances in the water that might otherwise feed dangerous microalgae, reports Charles Yarish, Ph.D., a University of Connecticut professor whose Stamford lab has one of the most significant collections of seaweeds in the world. Yarish said pollution flows into Long Island Sound from sewage treatment plants, which carry waste and fertilizer run-off, and from the atmosphere. “Seaweed aquaculture gives coastal managers another tool in their toolbox to remove [potentially dangerous] nutrients in the coastal water. These farmers provide an ecosystem service to the public.”

Yarish started studying seaweed aquaculture in the early 1980s when he realized during a sabbatical that the United States has an “exclusive economic zone,” or ocean area over which a nation has jurisdiction, of more than 11 million square kilometers. “An astonishing number,” he said. Why wasn’t the United States using this coastal zone to grow seaweed, which could bolster food safety and security, and generate economic and environmental value? “I basically said we have such an opportunity in the oceans to do something for the greater good of people. But nobody was interested. They basically said, ‘Let the Asians provide the product to the U.S.’”

He went to Asia to investigate. In China, he saw huge swaths of coast carpeted by fish and seaweed farms and nearby “huge areas of industrial development,” releasing waste into the same watercourses that fed those farms. He believed the U.S. could do better. At UConn, he developed the Seaweed Marine Biotechnology Laboratory and, slowly, became one of the foremost seaweed cultivation experts in the world. He received funding from Connecticut Sea Grant, which continues to support kelp aquaculture research, and established research farms at the western end of Long Island Sound, in the East River in New York, and in Fairfield off Jennings beach. A start-up in Maine asked the professor to help it provide U.S.-harvested frozen kelp noodles to consumers. The partners wooed him with dinner—kelp strands cut a little thicker than spaghetti, served with olive oil and butter and a heap of mussels, clams and North Atlantic shrimp. Yarish was hooked. He offered to help the company on one condition: all their resulting innovations be available to anyone who asked.

Yarish and the partners developed tools to make farming and processing less labor-intensive and published an Ocean Approved kelp manual that started with how to collect sorus tissue and grow it in a nursery and ended with recipes for the food on the plate. Connecticut Sea Grant funded a similar, more scientific manual for scientists. UConn libraries hosted the work, and Google Scholar picked it up. More than 10,000 people downloaded Yarish’s how-to kelp manual.

If only he could cultivate more farmers to grow the product.

Yarish’s graduate students suggested that he spread the word through YouTube videos, which might appeal more than a manual to folks working in fishing communities. Yarish proved to be the ideal emissary, with his bushy mustache and zeal for dangling fistfuls of drippy, springy kelp in front of the camera. His videos garnered tens of thousands of views.

One of those evangelized was Bren Smith, a former Newfoundland fisherman who owns Thimble Island Oyster Farm in Branford Harbor. Smith had become wary of commercial fishing practices and was searching for more sustainable ways to make a living without destroying the very environment he relied on to ply his trade. In addition, hurricanes had walloped his shellfish business, which damaged his spirit as well as his bottom line. Seaweed seemed to be the right answer at the right time.

Yarish said he found in Smith “not only someone who listened, but someone who could communicate with people who worked on the water, and with other entrepreneurs.” Smith bought into Yarish’s open-source philosophy, in which one kelp farmer helps another. The professor brought in ocean engineers, and Smith drew up plans for long lines, harvesting and more. Smith’s kelp farm in the Thimble Islands would serve as a working laboratory, with planting and harvest documented, tested, sampled, and recorded, and results passed along to the Department of Aquaculture, which runs its own tests for heavy metals, and to Connecticut Sea Grant, which ensures seaweed safety. Next, Smith started GreenWave to train other kelp farmers. “We thought this will be nice, helping out local folks,” he said, “but 8,000 people signed up for the farmer training program.” So GreenWave changed strategies, offering how-to videos to train whoever was interested. Last month, GreenWave launched the Regenerative Ocean Farming Hub, a “seed-to-sale” resource that provides free training, tools and community to more than 1,000 kelp farmers nationwide.

In Connecticut, 15 commercial kelp-fishing sites from Greenwich to Stonington have permits. But because of mounting challenges, only three commercial farmers, including Flores, harvested in 2022. “It’s all wind dependent. We’d get out to the farm, and there were 3-foot waves smashing on the side of the boat. You can very easily get yourself wrapped up in a line or get your boat swamped. It was too dangerous, and sometimes we’d have to turn back,” she said.

Yarish, Smith and Flores say the state’s kelp business could grow with state-supported infrastructure: hatcheries for seed and processors to blanch and freeze or dry kelp. “It’s a big challenge,” Flores said. “Kelp is a temperature-controlled food. You can’t just pull it out of the water and slop it on your deck. It’s regulated, like shellfish.”

In the meantime, farmers like Flores will continue to supply fresh sugar kelp to chefs from Greenwich to Hartford to Stonington. By Smith’s count, anywhere from 1.3 to 1.5 million pounds of kelp will be harvested and sold this year in New England. Depending on the weather, that is.