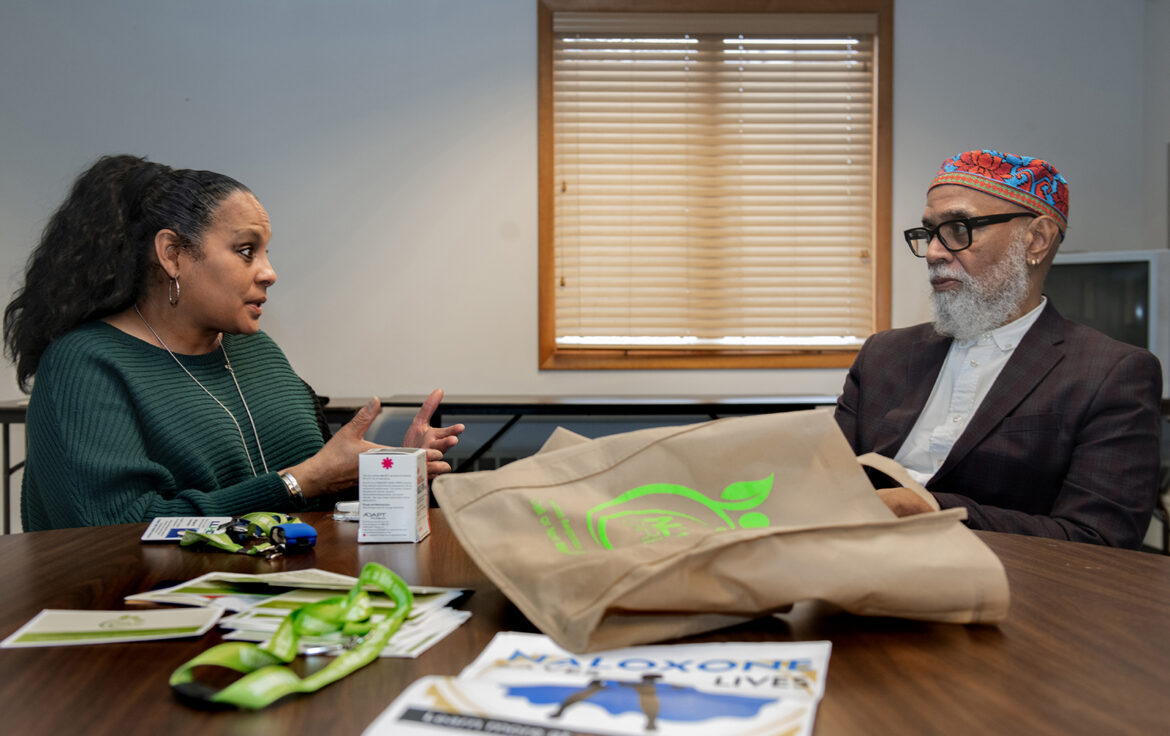 In the basement of Madry Temple Church in New London, Margaret Lancaster, a health program coordinator at Ledge Light Health District, shows the pastor how to administer Narcan, the opioid overdose reversal treatment.

In New Haven, at the Dixwell Avenue Congregational United Church of Christ, the Rev. Jerry Streets and local clinical staff are offering substance use disorder treatment.

These alliances of frontline health care workers with trusted community leaders are addressing the alarming rise of substance use disorders by leveraging the cultural power of churches to reach people in need of help.

Overdose mortality rates have risen among all races in Connecticut over the past three years. But the rise has been particularly marked among the Black population. A rate in 2019 of 34 deaths per 100,000 people more than doubled to 70 deaths per 100,000 by 2021.

Figures from the Department of Public Health in Connecticut show that since 2019, more than 80% of overdose deaths have involved fentanyl. The influx of that drug has significantly affected communities of color, the data up to January 2022 show.

Alcohol use rose at the start of the pandemic across all populations. But among Black people, there was a sharper increase in binge drinking than among whites, according to a report by the Research Triangle Institute.

Seeking help for substance use disorder is rarely straightforward for anyone. Lancaster says the barriers are even higher for people of color, who are already marginalized and distrustful of official institutions.

Rev. Jack E. Madry said, “Drinking has gone up, self-medicating. People are doing whatever they can to try not to allow depression to overtake them.”

“Because the lens is already on you, we try not to make the lens bigger,” Lancaster said. “Sometimes that means staying with the circle of people that you trust.”

“We’re setting the table for someone to come to the table, come sit with us,” Lancaster said of the harm reduction training she’s coordinating.

Lancaster has been in recovery for 17 years. She says that lived experience informs her work every day.

“When you receive individuals who have substance use disorder, you just have to accept people where they are and love them where they are,” Lancaster said.

She’s facilitating four weeks of training for 10 congregations around New London County. The program is open to communities of all faiths. Trainers from the National Harm Reduction Coalition will conduct the sessions. 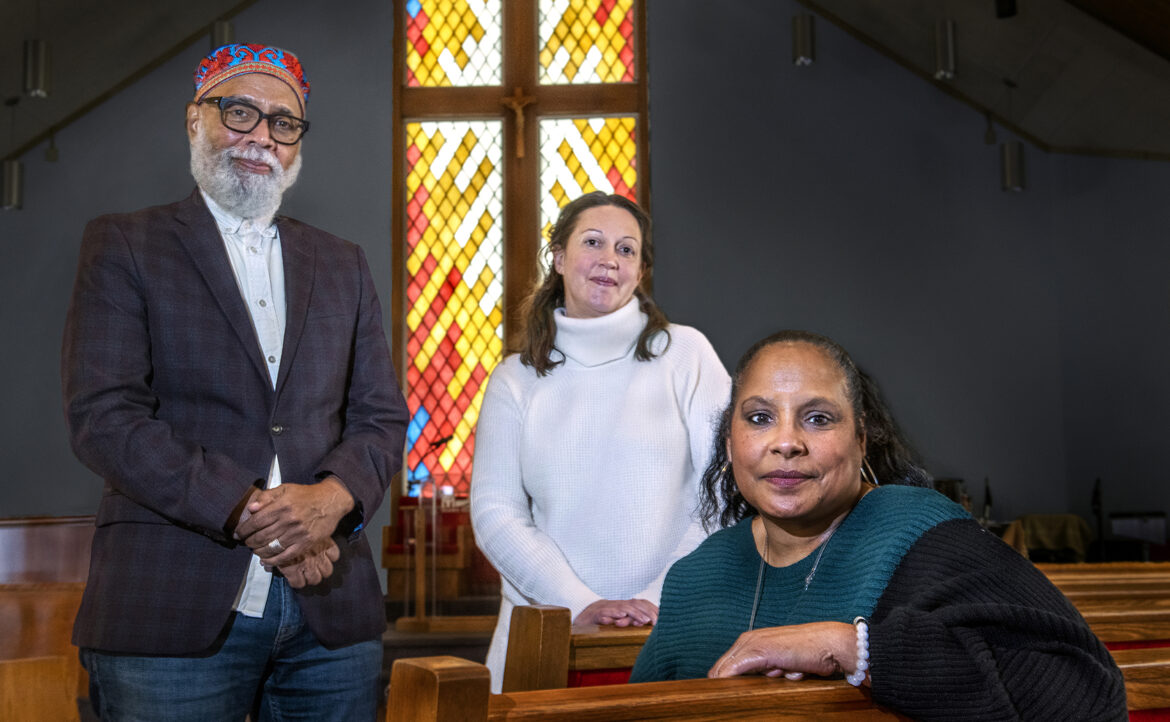 Harm reduction means just that: It does offer the opportunity for someone with substance use disorder to get into treatment if they choose, but the first principle is that they stay safe and alive, even if they keep using. The program includes training in how to use naloxone and the distribution of fentanyl test strips so users can make sure the drugs they are taking are safe.

Trisha Rios is a recovery navigator with Alliance for Living, who is working with Ledge Light, engaging with people in the community on harm reduction and connecting them to treatment.

“This is absolutely huge,” she said of the faith-based initiative. “It’s going to be a game-changer. I’ve had experiences speaking at certain churches where I could go and tell my story, but I couldn’t bring my Narcan, you know?”

She said it will put the knowledge of harm reduction techniques in the hands of community leaders who can make a difference.

“It’ll change the dynamics,” Rios said. “Our churches do great with helping people. But if they have the knowledge of what comes with substance use or mental health, it’s going to be more than just coming to get a pair of socks.”

Streets of New Haven uses the word “hospitality” to describe what they’re trying to achieve with the Dixwell church setting.

“You want it to be in an environment where people are comfortable and familiar,” he said.

“Substance abuse has hit the communities of people of color in a much more devastating way than some other communities,” said Annette Streets, Jerry’s wife. “We feel an urgency to do whatever we can to help address it.”

The program they’re hosting was designed by Dr. Ayana Jordan, now an associate professor of psychiatry at NYU Langone Health and the former director of Yale’s Social Justice and Health Equity Curriculum.

“One of the underlying factors of health care disparities is not that people don’t care about themselves, not that they don’t want to access health, but they are not treated in a way that makes them feel safe,” she said.

“So much of what we’ve done in medicine for centuries has been dominated—at least in psychiatry—by white men, truly. And now we’re seeing the ramifications of that. Not because they inherently are bad, but it’s just a particular point of view. You don’t have access to varying points of view.”

She has already run a pilot program at the Dixwell Avenue church to demonstrate her idea. The study recruited people of color with primarily alcohol use problems to attend an eight-week program.

Recruits now in the study, which is funded by the National Institutes of Health, are divided into a control group attending conventional treatment at a New Haven clinic run by the Midwestern Connecticut Council of Alcoholism (MCCA), with the remainder going into a treatment group at the church.

At the Dixwell church, participants complete a computer-based cognitive behavioral therapy program and take part in spiritually based sessions with church volunteers that include meditation, music and prayer.

“Is there a culturally informed way to get them initiated into substance use treatment, but also keep them in treatment?” Jordan asks.

Rev. Streets said, “So, I had an appreciation and an understanding for what she was aiming to do.”

Annette Streets, who helps to deliver the pastoral aspect of the program, said some of the participants remember coming to the church as children.

“So, a person said, ‘I learned how to play drums right over there,’ you know, or ‘I took dance lessons right on that stage,’” Streets said. “It’s a welcoming space to people in the community, and they feel comfortable coming here.”

The small-group aspect spoke to Terry Ritter, 50, who said she’s been using alcohol and drugs since she was 13.

“I done been through so many drug programs. I’m on like my 10th, 12th drug program. There, I’m in group, and I can’t wait to leave to go get high. I didn’t think about that when I was in group here. My mind was clear. We formed a bond. That’s what it was. We formed a bond here.”

She said that only once before has she been successful in quitting completely. However, she now says she’s been clean for six months since she completed the program in September.

“I still think for the most part at agencies across the state—even within our own—people fail to understand urban trauma and how much it factors into their continued addiction and their continued resistance,” he said.

“God knows, New Haven has a problem—talking about the public intoxication problem alone happening in these hot zones outside of package stores,” Palma said. “Sometimes, it’s right across the street from some of the churches.”

He said the majority of the population that his clinic serves is sent to treatment through the court system. That means that even if people attend sessions at MCCA, sometimes they don’t engage.

“It’s very hard for them not to see us as an extension of the legal system, even though we’re not,” Palma said. “They see treatment as punishment, not as recovery. So that’s what I love about the Black church project. They trust the church. They’re involved in the church.”

He’s excited about the possibility for learning that may come from the Dixwell study.

“It could change the way we service these clients completely,” he said. “Anything that’s evidence-based we would always use to inform our practices.”

For Jordan, changing the paradigm of treatment is a deeply personal goal.

“Being a woman, someone whose family has gone through many different iterations of addiction and mental illness, someone who’s Black in this country—all of those identities inform how I can not only engage with the patient, but my point of view,” she said.

The ultimate aim is to design a program that could be replicated and rolled out among churches across the country.

“It really is about life or death,” she said. “We’re seeing people die disproportionately because they don’t have access to people who understand their cultural values to take care of them. It’s unacceptable.”

If you identify as Black, are 18 or older, and would like to reduce your alcohol use, the Black Church Project is open to new study participants. Contact Lawanda Frederick at 203 641 1218. If you represent a church or community organization that would like more information, contact Traci Norman, traci.norman@yale.edu.