A new poll shows that, with one in 10 millennials and one in five Generation Z members in the U.S. identifying as LGBTQ+, the proportion of that population should exceed 10% of the total U.S. population in the near future.

The Gallup poll found that roughly 21% of Generation Z — those born between 1997 and 2003 — identify as lesbian, gay, bisexual, transgender or something other than heterosexual (LGBTQ+). That’s nearly twice as many as millennials, and the gap gets even bigger among older generations. 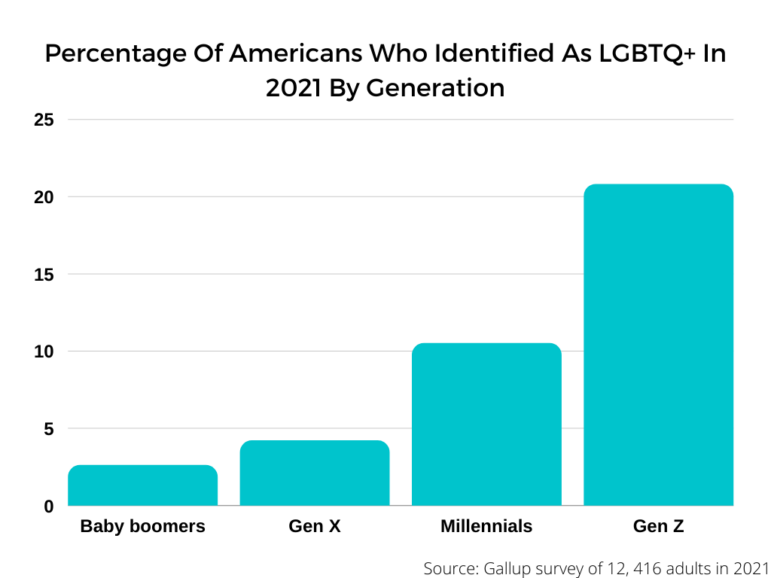 Overall, the poll found that the percentage of U.S. adults who identify as LGBTQ+ has increased to a new high of 7.1%, double the percentage from 2012, when Gallup first began tracking LGBTQ+ stats.

As part of the demographic information it collects on all U.S. telephone surveys, Gallup asked people in 2021 whether they believe they are heterosexual, lesbian, gay, bisexual, or transgender. Respondents could also volunteer any other sexual orientation or gender identity, and 86.3% said they are heterosexual. The results are from interviews with more than 12,000 U.S. adults.

The increase in LGBTQ+ identification reflects the increase in such identities among the youngest U.S. adults. Gen Z adults made up 7% of Gallup’s 2017 national sample, but in 2021 accounted for 12% of the sample, as more members of that generation reached age 18.

The percentage of Gen Z who are LGBTQ+ has nearly doubled since 2017, when only the leading edge of that generation — those born between 1997 and 1999 — had reached adulthood, according to Gallup. At that time, 10.5% of the small slice of Gen Z who were adults identified as LGBTQ+.

Now a much greater proportion of Gen Z has become adults. The increase in LGBTQ+ identification among this generation since 2017 indicates that the younger Gen Z members (those who have turned 18 since 2017) are more likely than the older members of the generation to identify as LGBTQ+.

Bisexual is the most common LGBTQ+ identity among Gen Z, millennials and Gen X, the poll found, while older Americans are as likely to identify as gay or lesbian as to say they are bisexual, the poll showed.

Overall, 15% of Gen Z adults say they are bisexual, as do 6% of millennials and slightly less than 2% of Gen X, according to Gallup.