New college safety data revealed a 29% decrease in all crimes reported across Connecticut’s 10 largest four-year undergraduate institutions from 2019 to 2020, including a 42% decrease in sexual offenses.

This 29% decline marks the steepest drop in recent years. Between 2018 and 2019, reported crimes among the 10 largest universities decreased by 11% and sexual offenses decreased by 17%. University of Connecticut spokesperson Stephanie Reitz said that the COVID-19 pandemic, which halted the spring semester and moved classes online in March of 2020, can explain that year’s dip in crime.

“The coronavirus pandemic significantly decreased the on-campus population at Storrs and the regional campuses for much of the 2020 calendar year, and the number of incidents reported during that period decreased as a result. Previous figures from 2019 and next year’s 2021 figures are expected to be more representative of a typical year,” Reitz wrote in a UConn press release. 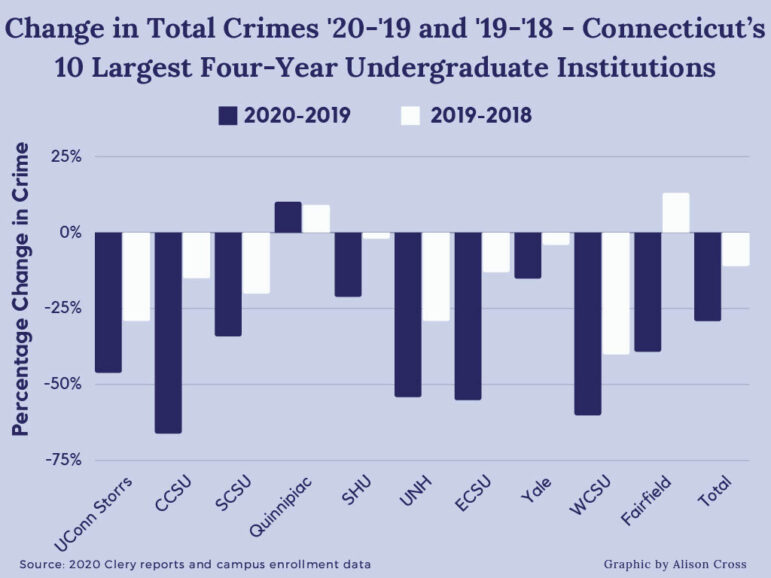 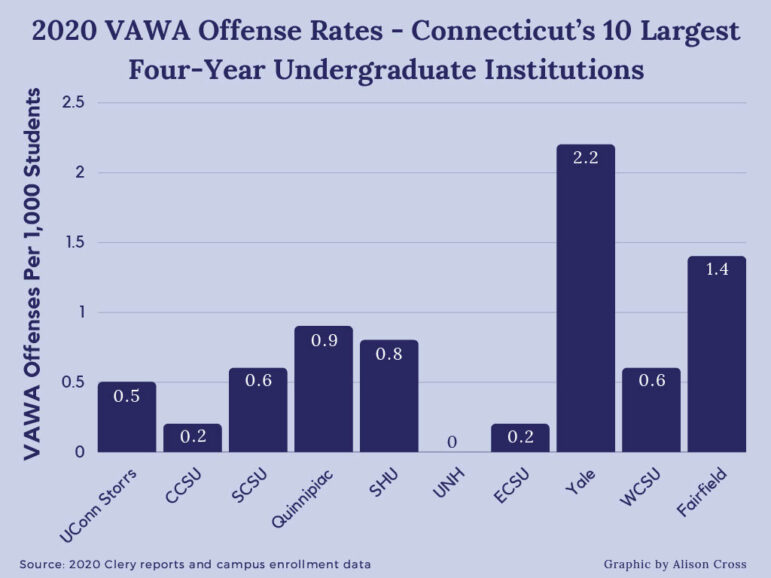 The schools with the lowest rates of sexual offenses were SCSU, University of New Haven, Sacred Heart, CCSU and UConn Storrs, all of which recorded a rate of less than 0.5 sexual offenses per 1,000 students.

Many survivors of sexual assault never report their experience to the police. According to the Rape, Abuse & Incest National Network, 20% of female students between the ages of 18 and 24 report their assault to law enforcement. RAINN estimates that during college, 13% of all undergraduates and graduate students experience rape or sexual assault. The rates are even higher for undergraduates.

“Among undergraduate students, 26.4% of females and 6.8% of males experience rape or sexual assault through physical force, violence, or incapacitation,” RAINN wrote on their website.

Half of the schools reported no hate crimes or bias-related incidents for 2020. Quinnipiac reported three, UConn Storrs and Yale both reported two, and UNH and WCSU reported one each.