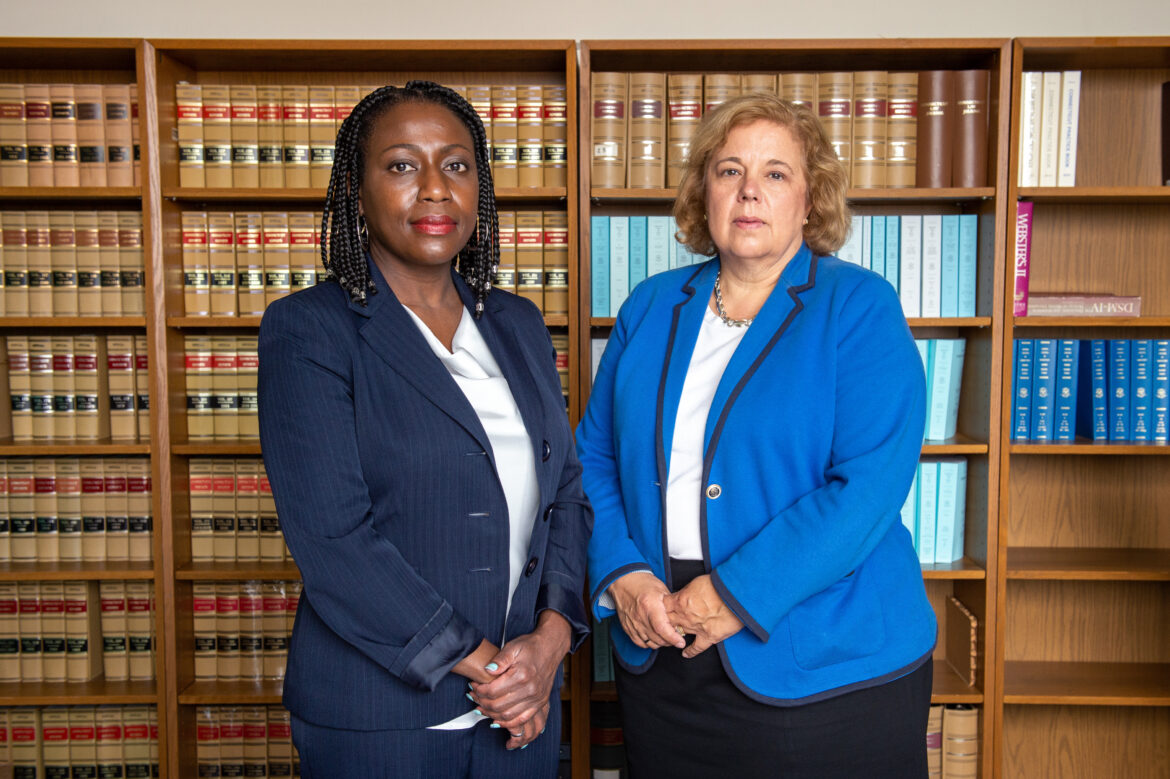 Christine Rapillo (right), Chief Public Defender for the state Division of Public Defender Services, and Jassette Henry (left), a senior assistant public defender in New Britain and a tri-chair of the Racial Justice and Cultural Competency Committee, say that they see higher rates of domestic violence arrests in communities of color.

Black and Hispanic women make up about 25% of the state’s female population but represent about 53% of domestic violence arrest cases for adult females in 2020, Judicial Branch data show.

It’s a disparity that is playing out in courtrooms across the state, according to public defenders who contend that Black and brown women often face harsher penalties and longer court proceedings to gain a favorable outcome.

“This is real, it is very real,” said Jassette Henry, a senior assistant public defender in New Britain and a tri-chair of the Racial Justice and Cultural Competency Committee within the state’s Division of Public Defender Services. “The question is, what are we going to do about it?”

“Black people are overrepresented in arrests,” Henry said. “It’s not surprising that Black women are getting arrested in a domestic violence incident at a higher rate. They call police and wind up arrested. It’s also about how they are treated in the system and what kind of hoops they have to go through to get a favorable disposition. It’s very disturbing. This is a real issue.”

“The domestic violence arrests are a microcosm of what you’re seeing in the wider system,” said Christine Rapillo, the state’s chief public defender who runs the Division of Public Defender Services. “Poverty drives a lot of this. We see higher rates of arrest in poorer communities, which tend to be communities of color.”

Lack Of Diversity In Criminal Justice, Understanding The Culture

One problem is that there isn’t much employee diversity in the state’s criminal justice system positions that deal with defendants of color, Henry said.

“There are offices in the division that have no Black or Hispanic public defenders,” Henry said. “If attorneys don’t understand our culture, how can they advocate for their clients? How do we deal with this inside the courtroom when we are in front of a white judge or a white prosecutor? And how do we educate our public defenders who are not people of color to understand our culture?”

The key is hiring a more diverse workforce and educating law enforcement and court staff, including judges, in cultural competency, Rapillo said. “If you have never stood in the shoes of a Black woman, you aren’t going to know what cultural factors are driving the situation. We need a more diverse workforce, and we can educate people to be more aware. Diversity brings different perspectives to the work.”

The Division of Criminal Justice, which encompasses the state’s prosecutors, is committed to hiring people of diverse backgrounds, thoughts and experiences, according to a statement issued by the agency. “The Division is continually working to assemble a staff that reflects the communities we serve because we believe diversity strengthens the Division and bolsters trust in the criminal justice system,” the statement said.

The agency said decisions about whether to pursue criminal cases are based on the facts of the case, the evidence and the law. “Prosecutors in Connecticut strive every day to achieve justice for all parties involved in a case, making sure to consider the needs of the victims and the safety of society,” the agency said.

Service providers contend that they serve victims of domestic violence in a culturally competent way. But many acknowledged that the coronavirus pandemic highlighted inequities in the system and forced providers to seek ways to engage more women of color to seek services.

Black women may be more hesitant to call police or seek services because the arrest of a partner could mean a loss of income, or a protective order could bar a partner from contact, which could lead to childcare issues for the victim, some providers said.

“Overall, our services are pretty evenly split among demographic groups,” said Maria Guzman, director of Safe Connect, a program offered by the Connecticut Coalition Against Domestic Violence (CCADV). But disparities in the way cases are handled can still exist “in ways we don’t recognize,” Guzman said. Barbara Damon, executive director of the Prudence Crandall Center, said that the pandemic highlighted areas where service providers need to do better.

CCADV is the umbrella organization for the state’s 18 providers that offer shelter and counseling to victims of domestic violence. Statewide, about 60% of clients are white, 30% are Hispanic and 20% are Black, according to Tanya Johnson, CCADV’s vice president of operations.

“We recognize that there are many people who will not come through traditional brick-and-mortar service providers,” Johnson said. “They go to faith-based and smaller providers. It’s very formidable for people to seek help when English isn’t their first language or if they are experiencing extreme poverty.”

CCADV started a program last year to provide training in English and Spanish to faith-based communities so the organizations can recognize domestic violence and connect victims with resources since many women of color will not turn to regular channels for help.

The Center for Family Justice, which provides shelter and domestic violence services in Bridgeport and surrounding towns, also offers outreach through a Latinx team that goes to churches and into the community.

“When we think about who we trust, women of color are not going to be walking into the police department to seek help,” said center CEO and President Debra Greenwood. “You have to ask women of color, what are your experiences? Some have sons, and they say I’m afraid they can’t be out on the street. When you are afraid, you have a mindset that immediately puts a wall up.”

The pandemic and the social justice issues that came to the forefront in 2020 highlighted areas where domestic violence service providers needed to do better, said Barbara Damon, executive director of the Prudence Crandall Center in New Britain.

Sometimes it means crafting a safety plan that doesn’t include police, she said. “It’s easy for us to think we know what the best thing is in any situation,” Damon said. “But that’s not always true. Now we’re talking about how you can be as safe as possible. The key for us is not to give in to stereotypes and meeting people where they are and taking the time to understand white privilege and the built-in racism in our society. We can’t do this work without that understanding.”