Ricks-Cook, 17, a senior at Bloomfield High School, dreams of being a talk show host or a commentator on ESPN. 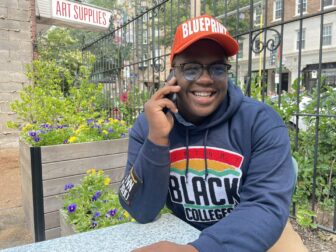 Shimei Ricks-Cook aspires to be a TV talk show host.

Ricks-Cook and his friend Kobie Washington created their own sports podcast at their school called Shimei and Kobie Unfiltered. They discuss professional sports leagues such as MLB, NBA and the NFL, Cook is the executive producer, creator and editor for the podcast. He used to play football for his school team freshman and sophomore year but decided to cut his season short to pursue his passion in journalism.

Ricks-Cook is the oldest of four siblings: Makenzie, 12, Bailey, 7, and Jaxon, 3. Ricks-Cook had an interesting answer when he was asked what kind of animal he would be if he could be an animal.

“Probably a lion because a male lion is very protective of his family,” he said.

Cook earned high honors at his school and is a member of the National Honors Society.

Also, his personal goal is to lose weight because he felt like he gained weight since quarantine.

Ricks-Cook has a job at a local restaurant in Bloomfield called Amna’s. He is a host and waiter there and the restaurant consists of American food with a Caribbean twist.

Ricks-Cook said journalism allows him to be creative and become the best version of himself.

Tori Matula is a student at Foran High School, Milford.