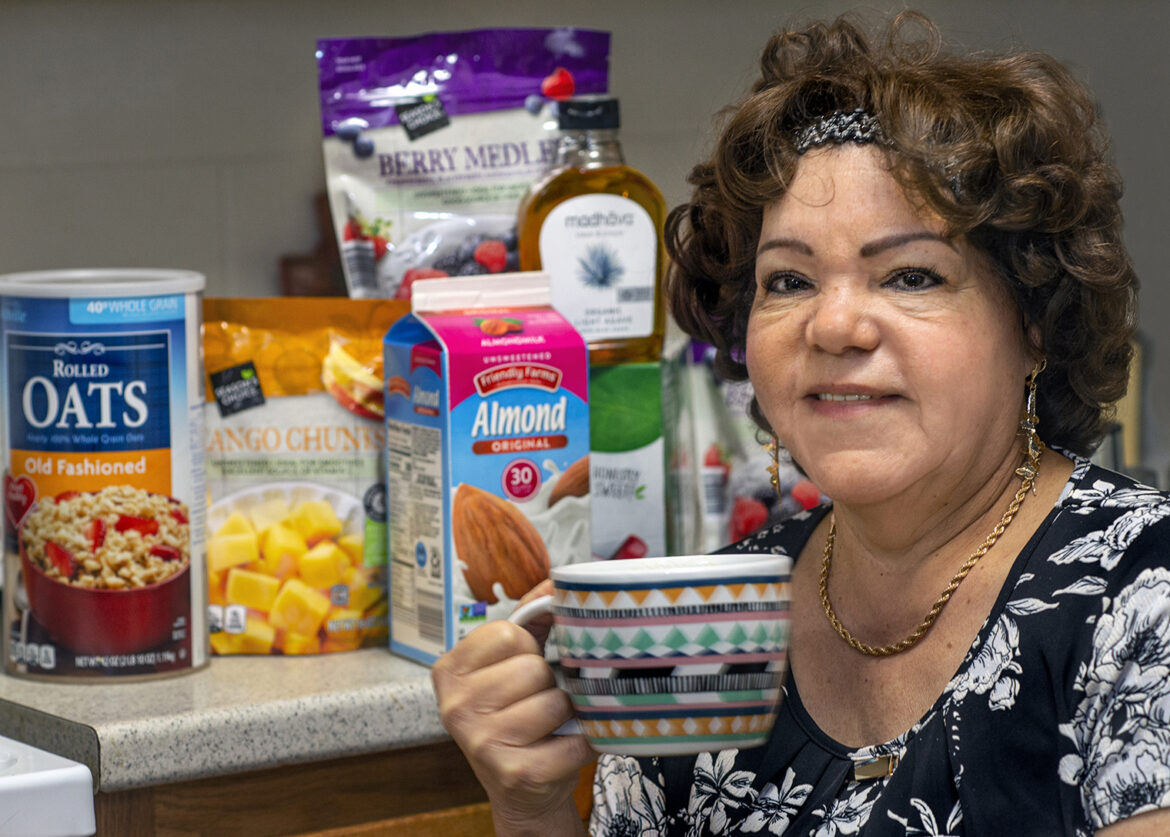 Nydia Rodriguez, 64, with a smoothie that she made for lunch. The Lawrence + Memorial Hospital's bilingual diabetes education program has helped Rodriguez manage her diabetes.

Since Nydia Rodriguez met Wanda Santiago about a year ago, the New London resident has lost 20 pounds and gotten her Type 2 diabetes under control. That’s because Santiago, Lawrence + Memorial Hospital’s bilingual diabetes educator, has taught Rodriguez, a former nurse from Puerto Rico, about portion control, sugar substitutes and how to cut back on bread and pasta.

Santiago, who was also a nurse in Puerto Rico, has even connected Rodriguez with food banks that offer fresh fruit and vegetables.

“I talk to her almost every day,” Rodriguez, 64, said in Spanish, with her daughter Yolanda Mejias translating. “If I need anything, I’ll call her.”

Diabetes is the seventh leading cause of death in the U.S. and the main cause of kidney failure, lower-limb amputations and adult blindness. Most people with diabetes have Type 2, in which the body doesn’t use insulin well. Five to 10% have Type 1, in which the body stops making insulin. Our bodies need insulin to get glucose from the bloodstream into the cells of the body.

Mirroring a national trend, diabetes among Connecticut adults has risen from 6.9% in 2009 to 9.7% in 2018, according to the state Department of Public Health (DPH). Cindy Kozak, the coordinator of DPH’s Diabetes Prevention and Control Program, said the state is working to reduce that rate, but it’s a challenge.

“Diabetes is a very expensive disease, both economically as well as in personal pain and suffering, so there are efforts to really bend that curve,’’ she said. According to a DPH October 2020 report on diabetes in Connecticut, approximately 19,500 new cases of diabetes – or 7.5 per 1,000 adults – are diagnosed per year. The incidence of diagnosed diabetes is highest among adults aged 45 to 64 years.

The state spends $153,000 on free Live Well With Diabetes programs in many communities, among its many efforts to curb diabetes. Connecticut residents are also taught by certified diabetes care and education specialists around the state at diabetes education centers. These programs are proven to lower the A1C, a three-month measurement of blood sugar control, Kozak said.

“I ask doctors if diabetes education were a pill, would you prescribe it?” she said. “There are no side effects, and it’s a real benefit.”

L + M hired Santiago in 2019 as part of a concerted effort by the hospital, the city, local doctors, diabetes educators and the Ledge Light Health District to improve the health of residents with diabetes. The need is urgent in the city, where 12% of adults have diabetes, compared to 9.7% statewide and 11% in greater New London. A 2019 report found that in greater New London, 25% of African Americans and 23% of people over 65 have diabetes. Forty-six percent of Latinos are obese, putting them at risk for Type 2 diabetes. Diabetes and other illnesses exact a heavy toll in New London’s poorest neighborhoods, where census data shows the life expectancy is 69 years old. In nearby Stonington, it’s 86.

Dr. Mae Whelan, an endocrinologist at the Northeast Medical Group Diabetes and Endocrine Center in New London, said her patients face food insecurity, few safe places to exercise, language barriers and limited access to transportation. Their problems have worsened during the COVID-19 pandemic.

Ledge Light, the New London Senior Center, the hospital and Whelan’s practice all offer diabetes education, including by phone during the pandemic.

“This is the hardest chronic disease to manage because they have to know so much about it,” Whelan said. “They have to understand what blood sugar is, when to do a finger stick, when to take their medicine and how to take it.”

While growing up in Detroit, Reona Dyess saw her great-grandmother struggle with diabetes.

“The terminology that I heard in my family is ‘I’ve got sugar,’” said Dyess, who is Black. When Dyess, a New London city council member, was diagnosed with Type 2 diabetes a dozen years ago, it hit her hard. “I hated that it happened, and I was in denial at first,’’ she said.

Now 56, Dyess requires two insulin shots a day. She said the diabetes classes in New London have helped her be more mindful about what she eats. Dyess said she was thrilled last year when the state legislature passed a $25 a month cap on insulin for those on state-regulated health insurance. When the law takes effect next year, it will also cap the cost of diabetes supplies at $100 a month.

Gretchen Edstrom, the education coordinator in Whelan’s practice, said some patients ration their insulin and medications because they can’t afford them. Some of the medications that work best at controlling blood sugar cost $900 or more a month, she said.

“They say ‘I knew I was running low on the medication, so I was only taking half my dose,’” Edstrom said. “It’s very short-sighted to not take these life-saving drugs.” Reona Dyess says diabetes education has helped make her more mindful about what she eats.

Dyess said she switched to cheaper but less effective over-the-counter insulin from Walmart during a year when she had no health insurance.

“We try to give them healthy options,’’ she said. “I think one of the hard things with having diabetes is that it’s expensive to eat that way.”

As executive director of The Drop-In Learning Center of New London, Dyess has her students grow tomatoes that they bring home. She said the classes, food banks, farmers markets and community gardens throughout New London make a difference for people with diabetes.

“I see us going in a better direction,” she said.