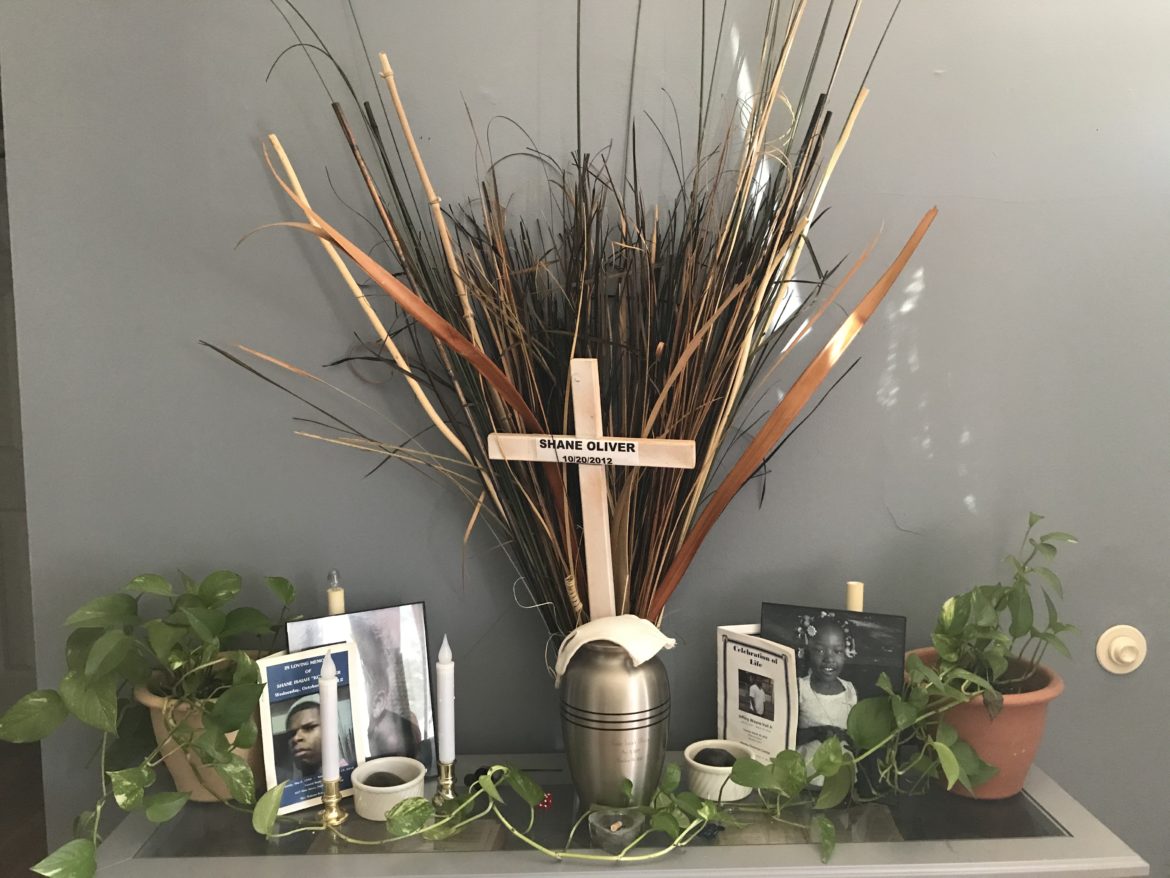 Janet Rice's home is filled with photos and memories of her son Shane Oliver who was fatally shot in 2012.

Janet Rice’s home is filled with pictures of her son, Shane Oliver, a tall, gregarious man who never began a day without checking on his grandmother and never ended one without having a long talk with his mother. He was 20 when he was fatally shot, just a few minutes from the family’s Hartford home.

“He was my only child and my best friend,” Rice said.

Today Rice is the outreach coordinator for Fairfield-based Connecticut Against Gun Violence, work in which she believes her son shares. This summer has been a particularly difficult time to be working against gun violence in Connecticut. New Haven, Hartford and Bridgeport have experienced a recent spate of shootings and 11 people have been killed in New Haven to date, one shy of the number of homicides for all of last year.

Janet Rice talks with Colleen Shaddox about how the loss of her son Shane shaped her purpose in life.

Connecticut has the sixth lowest rate of gun-related deaths in the nation in 2018, according to the most recent data from Centers for Disease Control and Prevention (CDC). The number of gun homicides have fallen since the state passed laws restricting gun ownership in 2013. There were 226 firearm deaths in the state in 2012, compared with 186 in 2018. Most of those gun deaths are suicides. Homicides are concentrated in a few urban centers. More than two-thirds of gun homicides in Connecticut happen in Bridgeport, New Haven and Hartford. As tragic as mass shootings are, low-income neighborhoods and communities of color bear the brunt of gun violence.

For Rice, the toll is never-ending. In early March, she participated in a vigil for a young man who died by gun violence, an all-too-frequent part of her work as an advocate. Several years after she lost her son, a nephew was also fatally shot in Hartford.

Gun violence marred Oliver’s life long before the fatal day in October 2012 when an argument with an acquaintance ended with his death. Luis Rodriguez, also 20 at the time of the shooting, was convicted of murder and sentenced to 40 years. In his short life, Oliver had seen friends and classmates shot and killed.

“The sad thing is … our kids having to walk past the crime scene tape to get from their school, getting off their school bus,” Rice says.

On the day he was shot, Oliver was on his way to collect money for a car he’d refurbished and sold, according to his mother. He’d been buying cars and flipping them for a profit. Oliver was a born entrepreneur. He was about 7 when he started selling bottled water on the street outside his father’s office. Oliver deduced that he’d do better if he moved to the corner and convinced his dad that it was safe to stray a few yards farther from the office. The new location did boost sales, as did his decision to add juice to his wares.

“He had a head for business,” Rice says. She chuckles and lights up, as she always does when she shares a happy memory of her son.