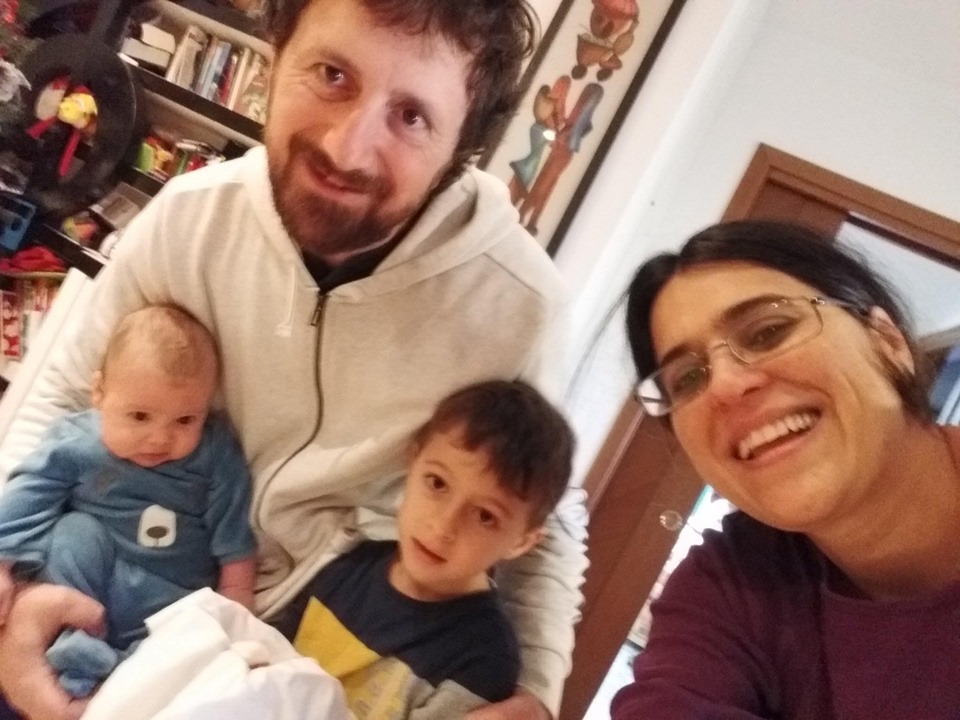 At home in Rome, the Savo family, Paolo, Beniamino, Andrea and Manuela.

Joann Rubino brought her cell phone outside to the balcony and swept the camera around for a neighborhood panorama.

The sky blazed a brilliant blue, the apartment buildings an unmistakable burnt sienna. But there wasn’t a soul in sight. “It’s a beautiful spring day, but I’m not leaving the house,” Rubino, 63, said via Facebook from her Italian home.

On a typical day in Castel Morrone, a town of about 3,500 people an hour’s drive from Naples, Rubino might be strolling the streets, dropping in on friends and family, stopping at a bar for a coffee or at a pizzeria—living la dolce vita.

But these aren’t typical days in Italy. The coronavirus has infected more than 100,000 Italians—and claimed over 15,000 lives—the most in the world, according to the World Health Organization.  Cases in the U.S. have surpassed Italy with over 153,000 reported; and more than 2,800 deaths, as of Monday (3-30) mid-day.

Italy reported its first case of COVID-19 on Feb. 20. Three days later, the government quarantined a dozen towns. Now, the entire country of 60 million people is on lockdown. 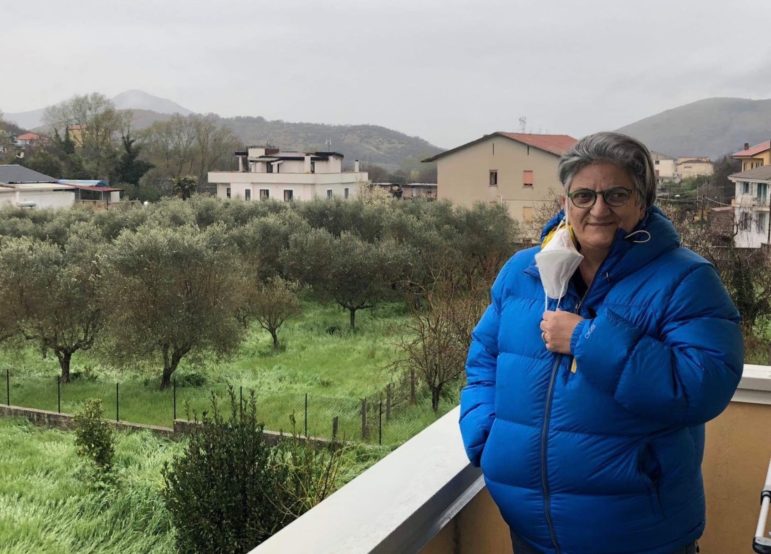 Joann Rubino on her balcony.

“At the end of February, they started to say there’s a problem. Like everyone else, I was thinking the problem’s up there, near Milan. Then they started counting the sick: one person, 20 persons, 30 persons, 25,000. I don’t even know how many there are now,” said Rubino, a former New Havener who moved to Italy with her parents back in 1979.

Every day, she notes the casualties: 440 deaths one day, 647 the next and then 743. She watches on TV as the sick line up in overcrowded tents outside of overcrowded hospitals, where doctors decide who gets a bed and a respirator in the intensive care unit and who goes without.

So far, Castel Morrone has been spared. Rubino attributes this to her paesani’s [fellow villagers] vigilance. In her little town, only three people at a time are allowed in the grocery store, the bakery, the pharmacy, the meat market. All the restaurants are closed, and there’s no takeout. The Red Cross delivers groceries to shut-ins.

The mayor sends out videos. A recent one: Close your windows and doors for street sanitizing from 9 p.m. to midnight. The police stop passersby, demanding to know why they are out. Joggers are fined for endangering their neighbors. Do it twice and face prison time.

Rubino can walk her dogs, but only within 100 meters of her house, and then she dashes back to the home she shares with her partner, Vito Giordani, and two of their children. Other family members live a short walk away, but in-person visits are forbidden. The family recently celebrated Father’s Day, March 19, via video chat. Once a day Rubino calls her sister, who goes out on her own balcony to wave.

“I’ve never seen anything like this in my life,” Rubino said. “It’s scary. It’s like wartime, only you don’t know where the enemy is or when he will strike.”

In Rome, A Race For Faster Tests

About 125 miles north of Castel Morrone, in Rome, Beniamino Savo drives to work on eerily empty Roman roads. Savo, 41, is a biomedical engineer and quality control manager for Israeli tech company BATM, which is racing the clock to develop an at-home Covid-19 test kit. 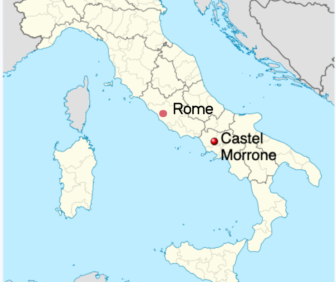 As soon as Savo enters the medical manufacturing facility Adaltis, he dons an overcoat, gloves and mask—all sent from Israel, as Italy’s supply has run dry. Every hour, the lab undergoes a deep clean.

When Covid-19 struck China, BATM obtained the virus’ molecular DNA sequence from Chinese colleagues. They identified the disease as a cousin to SARS and MERS, then joined with researchers from Rome’s Tor Vergata University to develop and manufacture a diagnostic kit. Savo and his colleagues were at work on the kit when he learned of the first cases in Italy.

“Nothing happened for two weeks, and it looked like everything was under control,” Savo said. “Then in a few days, everything happened. The trouble is, many are asymptomatic. They think they’re fine, but they are infecting others.”

At first, tests were readily available in Italy. If someone felt ill, they went to the doctor or the hospital for a swab, and six hours later they’d know the result. Now, though, doctors have stopped testing (and counting). Said Savo, “They tell everyone with symptoms to assume they are infected, and to stay home and to quarantine themselves, unless things turn grave.”

Tests have been harder to come by in the United States and elsewhere. To address this need, Savo and his colleagues work long days to hasten the approval on a test kit that BATM believes will be faster, cheaper and more accurate than others worldwide.

At the end of his 12-hour days, Savo takes every precaution to keep his family safe. When he arrives home he heads straight to a second bedroom, sheds his work clothes and takes a shower. Then he takes over for his wife Manuela, who is on maternity leave following the birth of baby Paolo and spends long days in the apartment trying to keep things interesting for her infant and her 5-year-old son, Andrea. Like her fellow Romans, Manuela Savo is not allowed to leave home unless absolutely necessary. The highlight of her day: at 6 p.m., she flings open the windows and joins her neighbors in an Italian folk song sing-along.

Covid-19 has changed even the most basic routines at the Savos’. Like many Italians, Beniamino and Manuela shopped every day for the family’s food. Not anymore. “Only one family member is allowed to go shopping, and you can’t enter with children,” Beniamino Savo said. “So, I go once a week. The line winds around the block and everything is empty.”

Carol Leonetti Dannhauser is a freelance journalist whose paternal grandparents were born in Castel Morrone. Her grandfather and Joann’s grandmother were siblings. Dannhauser first met Beniamino when he was 7 and she was in Italy reporting on a Sister Cities exchange trip. Their families have been friends ever since.

This story was updated with new US coronavirus numbers on March 31.