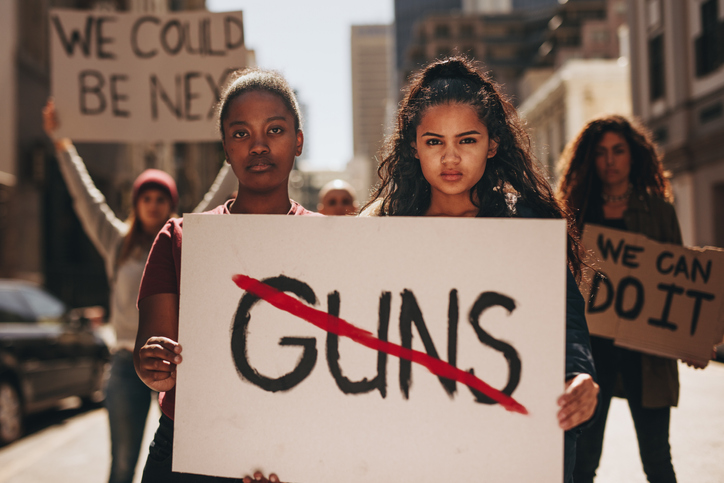 Connecticut ranks in the top five for states with tough gun laws.

After two mass shootings within 16 hours stunned the nation earlier this month, conversation turned to how best to remove guns from the wrong hands.

Seventeen states—including Connecticut—and the District of Columbia have “red flag” laws, also known as “extreme risk” laws, that, depending on the state, allow family members, household members, or law enforcement officials to petition the courts to remove guns from the hands of someone who might do harm to himself or herself, or to others. It’s an approach that is supported by 85% of registered voters, according to a 2018 Washington Post/ABC poll.

Connecticut’s red flag law was the nation’s first. Legislators in the Nutmeg State passed a red flag law in 1999, after a state lottery worker killed four lottery employees before he killed himself. Other states have been slow to follow suit. If Connecticut’s law was groundbreaking, a 2017 multi-university study found that an average of only 50 guns per year have been removed in the state, in part, because of insufficient police staffing. Unlike other states, Connecticut’s law allows only law enforcement to petition for a gun’s removal. States such as California and Hawaii allow medical professionals, school administrators and others to petition.

Gun advocates often balk at extreme risk laws for fear that such laws violate due process, though people who are threatened with the removal of their guns can appeal to the courts.

But doesn’t it make sense to remove the weapon from a would-be killer’s hand before anyone else dies?

According to a June 2018 FBI study, before they commit their crimes, active shooters tend to display four or five behaviors that are concerning, including impulsivity, interpersonal problems, depression, or excessive risk-taking. Many also shared their violent intent prior to the crime. A study from Everytown for Gun Safety, a New York-based nonprofit organization that advocates for gun control and against gun violence, said that 51% of shooters showed signs that they could be dangerous to themselves of others prior to pulling a trigger. Multiple studies have shown that the men behind the worst mass shootings share a history of threatening domestic violence—or perpetrating it—against women.

After the February 2018 massacre at Marjory Stoneman Douglas High School in Parkland, Florida, 10 states passed red flag laws. (Though the laws are too new to measure any actual change in gun violence, Connecticut’s law has reduced the number of suicide by firearm.)

Missing from the discussion is a federal red flag effort. Under current federal law, people cannot legally have a gun if they’ve been convicted of certain crimes, or if they have been involuntarily committed to a psychiatric hospital, or if they are subject to a final domestic violence restraining order. But the law is full of loopholes. Protections are limited, and the law does not provide a way to remove guns from abusers.

Sen. Lindsey Graham, a Republican from South Carolina, and Connecticut’s Sen. Richard Blumenthal, a Democrat, have been working on a bipartisan federal bill that would encourage more states to adapt red flag laws. Blumenthal said recently that the bill is nearly ready. President Trump has said he’d sign such a bill, though he also said he’d support universal background checks, but backtracked on that after a phone call from Wayne LaPierre, chief executive of the National Rifle Association . If Trump keeps his promise on the red flag law, this would be one of Washington’s most significant gun legislations in two decades.

It’s a start, but it’s not enough. We also need to expand background checks to internet and gun show purchases. We need to make it more difficult to carry a concealed weapon. We need waiting periods when people want to buy a firearm. We need to stop sending thoughts and prayers and start passing legislation with teeth. We need teeth.