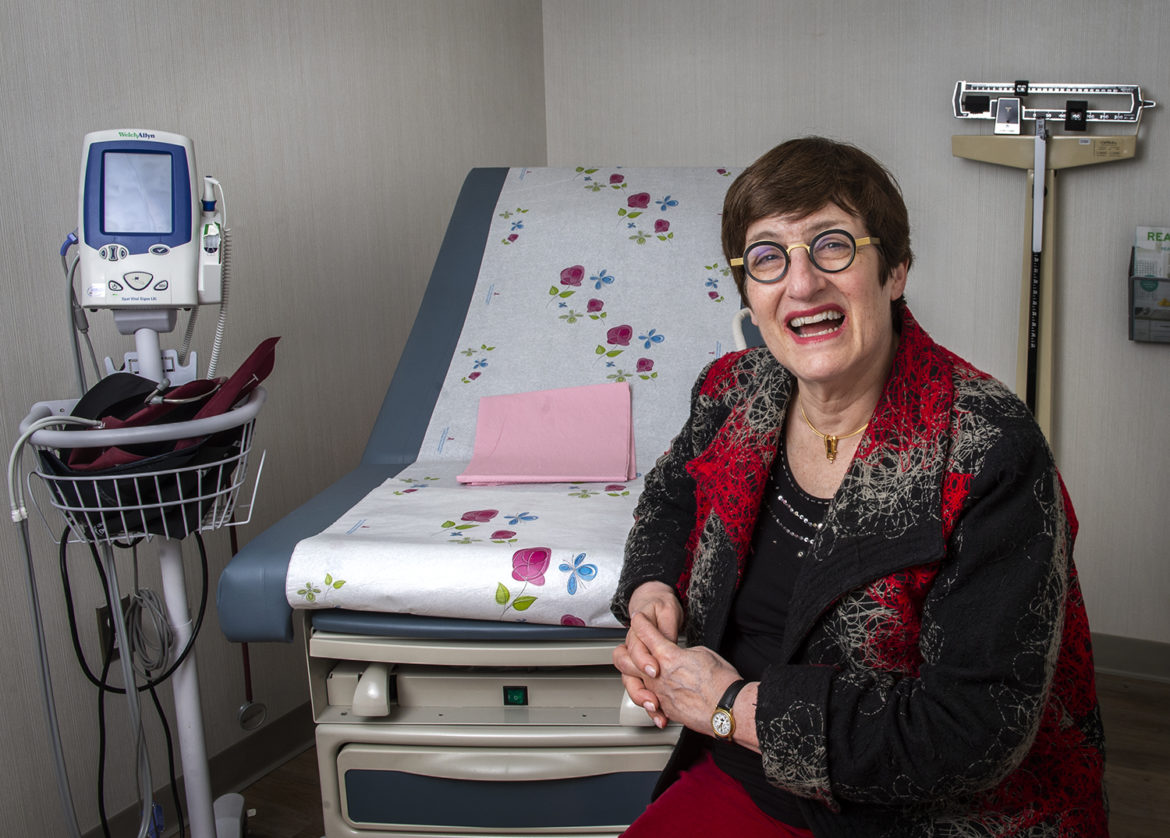 Dr. Mary Jane Minkin in one of the examining rooms at 40 Temple Street.

Every day an estimated 6,000 women in the U.S. reach menopause, a natural part of aging. But for countless women, it feels like anything but. The symptoms, which range from merely bothersome to debilitating, are triggered by the body’s loss of estrogen, which occurs at a median age of 50 to 52 among women in industrialized countries.

Vasomotor symptoms alone (hot flashes, night sweats), which disrupt sleep and count as the most commonly reported complaint, last an average of 10 years and affect nearly 90 percent of menopausal women. A recent study published in the journal Menopause found that 250,000 women who suffered from hot flashes lost a cumulative $300 million per year in wages due to lost productivity and doctor visits, compared to asymptomatic women. Postmenopause, women face a whole new set of health challenges, including a heightened risk of cardiovascular and bone disease. Not only can this “normal” phase of life and its attendant challenges prove daunting, but for many in its throes, answers seem elusive.

“A lot of women … they’re going into menopause. They’re miserable, but they’re not being treated,” said Dr. Mary Jane Minkin, a veteran Yale University professor of obstetrics and gynecology. “I have patients who have done all the right stuff and are stuck with miserable menopausal symptoms.” She said that often women don’t ask their doctors about treatments for menopause symptoms, and doctors often fail to ask their patients if they’re experiencing symptoms —both resulting in a lack of communication about the problem.

Experts blame a few factors as largely responsible for inconsistent management of symptoms, including a lack of training for medical students and residents, and lingering fallout from what experts now recognize as flawed yet highly publicized results published in 2002 from the ongoing Women’s Health Initiative (WHI) study, which linked hormone replacement therapy (HRT)—the primary treatment for menopause symptoms—to an increased risk of breast cancer. But bright spots are emerging on the menopause management front, with some healthcare providers and educators in Connecticut leading this positive trend.

“A lot of women … they’re going into menopause. They’re miserable, but they’re not being treated.” — Dr. Mary Jane Minkin

Minkin has been teaching at the Yale School of Medicine for over 37 years, and has dedicated much of her professional life to education around menopause. Her website, Madameovary.com, provides educational videos on menopause geared to consumer audiences. As for medical students and OB/GYN residents, Minkin said, “I try to teach it at every opportunity I can.” But too often, she notes, menopause “takes a back seat” to other clinical topics.

Research supports her claim. One recent survey of obstetrics/gynecology residents found that fewer than one in five polled reported receiving any formal training on the topic. In a 2008 survey published in the journal Menopause, University of Connecticut medical students who had completed their third year of OB/GYN clerkship between 2002 and 2007 were asked about their exposure to various OB/GYN topics during their clerkship; 40 percent of respondents reported receiving no menopause training.

Since that survey’s publication, UConn medical students’ exposure to menopause management has increased, thanks to Dr. Amy Johnson, who became director of University of Connecticut’s obstetrics and gynecology residency program in 2013. Johnson has a special interest in menopause and runs a clinic affiliated with Hartford Hospital at A Women’s Life Center in West Hartford, where she specializes in treating women with menopausal symptoms. She’s also made it a priority for the residents she trains to gain exposure to the topic. “Our students and residents now receive lectures on menopause, hormone replacement therapy, and alternative treatments,” Johnson said. In addition, she and other faculty members work with residents during clinical rotations on these areas.

“They do have opportunities throughout their training [to gain exposure to menopause topics]. Is it as robust as many of us would like? No. It becomes a matter of time,” said Johnson, who is currently working to formalize an arrangement whereby UConn residents will spend time at A Women’s Life Center.

Whereas training on menopause may be limited during medical school and residency, physicians interested in learning how to better respond to their menopausal patients can seek continuing medical education opportunities such as those offered by the North American Menopause Society (NAMS), launched in 1989.

NAMS “started because there was not enough research about menopause. The goal was to bring together a multidisciplinary group to talk about research, education and clinical issues around the topic of menopause,” said Dr. JoAnn Pinkerton, executive director of NAMS whose research efforts include serving as principal investigator for over 30 clinical trials on the treatment of vasomotor symptoms during menopause.

NAMS offers certification for health professionals who pass a competency exam regarding menopause symptoms and their management. Nationwide, over 1,000 clinicians are NAMS-certified. Connecticut has 41 healthcare providers who are members of NAMS, 23 of whom are NAMS-certified menopause practitioners, a large number relative to other states, according to Pinkerton.

“Telling women where they can find help is huge,” said Pinkerton, who notes that consumers can find NAMS-certified healthcare providers by zip code on the NAMS website, menopause.org.

Managing menopause “not only requires a long conversation, but a process that’s a little bit trial and error, because every woman is different.” — Dr. Matthew Saidel

As a respected resource for clinicians, NAMS also provides influential position statements, including one on hormonal therapy in 2017 whose recommendations take into account earlier published results of the landmark WHI study as well as newer WHI analysis and additional studies recognizing that age and time from menopause are key factors in determining safety of hormone therapy. This more recent research helps reassure providers and patients that, for many women, this cornerstone treatment isn’t taboo. “It’s opened the door for providers to determine what’s best and safe for their patients,” Pinkerton said.

When it comes to managing menopause symptoms, there isn’t a single or simple solution—regardless of the latest research. “It not only requires a long conversation, but a process that’s a little bit trial and error, because every woman is different,” said Dr. Matthew Saidel, co-medical director of Women’s Health Connecticut and president of the Hartford Hospital Medical Staff.

Saidel believes there’s only one way to become expert at treating patients in menopause. “As patients age into the perimenopausal and menopausal stages, that’s when doctors get experience taking care of them. There really is no substitute in terms of the nuances you see,” he said.

To him, making that extra effort is worthwhile. “If women are going to live half their life after menopause, we’ve got to learn how to make people feel comfortable, and we have to be comfortable making people comfortable,” Saidel noted.

“For those providers who have made a point of treating menopause, they have the most grateful patients you’ll ever see,” he added.