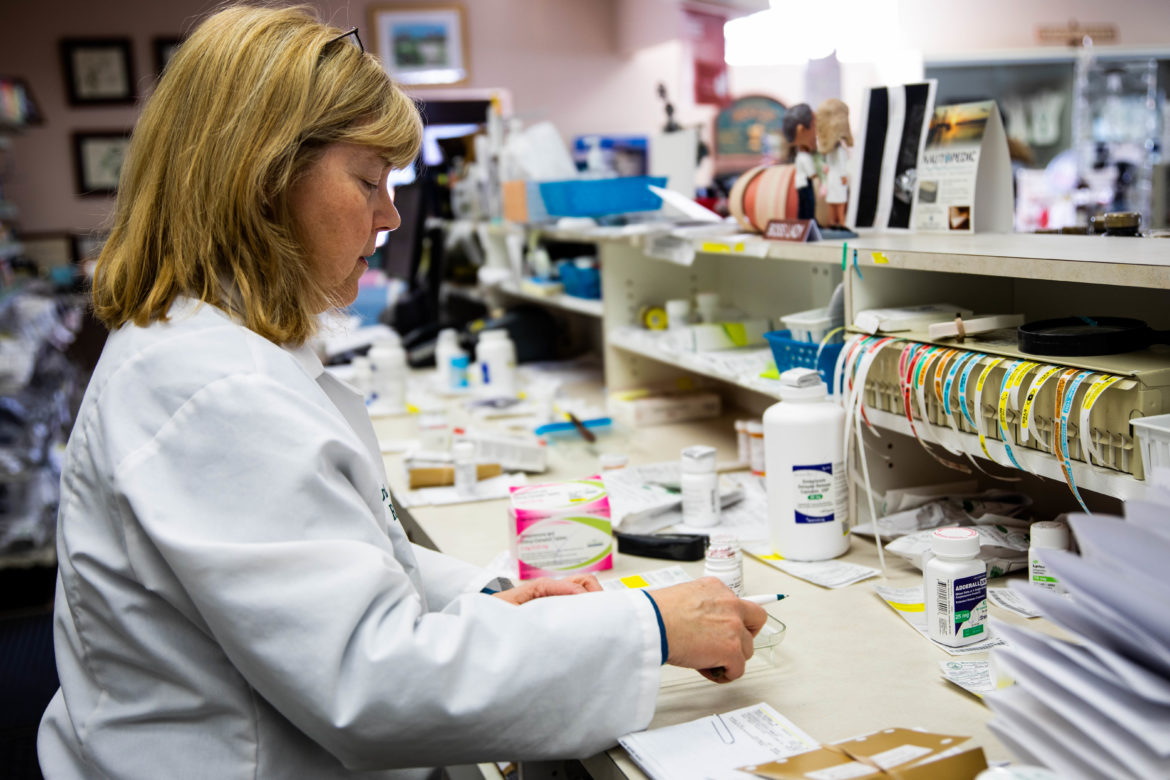 Marion Bradley fills a prescription for one of her customers. She is the lead pharmacist and co-owner of Beacon Falls Pharmacy.

Pharmacy benefit managers – the middlemen who negotiate drug purchases for insurers and large buyers – are coming under growing scrutiny and criticism both in Connecticut and nationwide for their role in the sharp rise of prescription drugs.

The third-party companies, called PBMs for short, originally processed claims for pharmacies, but now are hired by Medicare, Medicaid and commercial health plans to manage pharmaceutical benefits. Their reach is broad: they choose what drugs are covered by insurance; negotiate purchasing deals with drug makers; determine co-pays for consumers; decide which pharmacies will be included in prescription plans; and decide how much pharmacies will be reimbursed for the drugs they sell.

The growing legions of PBM critics, who include state Comptroller Kevin Lembo, pharmacists and their trade and service organizations, say that the industry is helping drive the unrelenting rise in prescription drug prices and insurance premiums.

PBMs, Lembo’s office and state pharmacists say, use a variety of tactics to capture cash from consumers, payers and pharmacies. One is spread pricing, where they pay the pharmacy less for a prescription than a payer gives them, sometimes even forcing the pharmacist to take a loss. Another is maximum available cost, in which they assess a monetary penalty on a pharmacy for failing to buy from the lowest-cost wholesaler — even if it’s impossible or impractical to do so. Yet another tactic is the granting of rebates to drug companies in exchange for inclusion of their drugs on PBM formularies, their approved lists of drugs. The rebate – paid after a drug is purchased — is typically a percentage of the price, creating a financial incentive to stock more expensive drugs as they produce bigger rebates, Lembo and pharmacists said. PBMs keep part of the rebate each time a drug is purchased, with some going to the insurance company that hired the PBM. So drug makers increase drug prices and PBMs push the higher-rebate drugs over cheaper ones with a smaller rebate, thereby raising costs for everyone else, Lembo said.

Lembo is seeking to reform the PBM process. His recent request for proposal for a new pharmacy benefit manager to run the state’s prescription drug programs requires an unprecedented level of transparency and that all savings be passed on to taxpayers and patients.

“We’re trying to make sure that our members, the people with pharmaceutical insurance, are best served with the best possible price for the most effective drugs,” he said.

Another tactic used by PBMs to extract money from pharmaceutical sales is “direct and indirect remuneration,” or DIR, fees.  According to Lembo’s office, the federal Centers for Medicare and Medicaid Services originally created DIR fees as a way to “true up” various discounts and rebates. In the early 2010s, they added efficiency parameters for pharmacies, allowing penalties if they fell short. Some of the different performance metrics include refill rates, generic dispensing rates, preferred product rate, audit performance/error rates and other quality measures in comparison to other pharmacies in a network, according to the National Community Pharmacists Association. A pharmacy’s performance could be tied to a “fee,” or reimbursement reduction, and theoretically could be tied to a bonus payment, the NCPA said. But the PBMs have exploited the new provision of the law by setting unrealistic and opaque parameters, pharmacists say.

“They make the metrics impossible to achieve,” said Nathan Tinker, CEO of the Connecticut Pharmacists Association. Four years ago, Robert Bradley, co-owner of Beacon Falls Pharmacy, didn’t know what DIR fees were. Today they are threatening to undermine his business.

In 2016, Bradley paid PBMs $6,000 in DIR fees. Last year, that figure ballooned to $90,000. And, he said, the fees are collected months — sometimes even as long as a year — after a prescription is filled, making them impossible to predict or plan for, he said. Sometimes the fee is more than the cost of the drug, and the pharmacy loses money, Bradley said.

Bradley and his fellow independent pharmacists, including Edmund Funero Jr., co-owner of Visels Pharmacy in New Haven, are trying to hold on. Like Bradley, Funero is being squeezed by DIR fees that doubled two years ago and more than doubled last year.

“We’ve never been in such a financially precarious position,” said Funero, whose family bought the 116-year-old pharmacy in 1965. “Reimbursement rates are continuing to decline. It’s putting us in a very difficult position.”

Bradley said his PBM refuses to explain why the fees have risen so astronomically. “They do whatever they damn well please,” he said. “The talk in the industry is that it’s going to get worse this year. It’s not a sustainable trajectory.”

For some pharmacies in Connecticut, that statement is already proving to be true.  Eleven independent pharmacies have gone out of business since August — about 6 percent of the state’s total — primarily because of exploding DIR fees, said David Benoit, vice president of patient care services for Northeast Pharmacy Services Corporation. More will follow if the fees continue to rise, which preliminary indications are they will, said Benoit, whose organization provides services to independent pharmacies. Tinker of the Connecticut Pharmacists Association said there are 158 independents in the state.

Lennartz referred to a recent McKesson white paper that found serious problems with DIR fees, including: PBMs are penalizing pharmacies for deficiencies they can’t control; their method for calculating the fees is not transparent; pharmacies have no mechanism to appeal; the fees often cause pharmacies to lose money on drugs they dispensed months before; and the charges are failing to reduce out-of-pocket costs for patients. In addition, Lennartz said, different PBMs have different criteria for imposing the fees, adding to the confusion.

The paper calls for a number of reforms, including charging the fees upfront instead of retroactively, after point of purchase.

“I want to make sure that pharmacies are measured on things that matter, but we need those metrics to be consistent and fair,” she said.

CVS Caremark, one of Bradley’s biggest PBM customers, declined to comment about Bradley’s increase in DIR fees or increases in general, referring questions to Pharmaceutical Care Management Association, the PBMs’ trade organization. In a written statement, spokesman Greg Lopes defended the fees, saying they “reduce costs and improve the quality of pharmacy benefits.” PBMs use their pooled purchasing power to extract savings from drug manufacturers and pharmacies and then pass them on to purchasers and consumers, said Lopes.

Lopes said that pharmacists unhappy with PBMs should press their third party negotiators like McKesson for better deals. But pharmacies and their trade organizations say that is impractical. The PMBs hold all the cards, they say.

Adding to critics’ concern is the consolidation of the industry. Three PBMs — CVS-Caremark, Express Scripts and OptumRX — dominate the market. Worries about conflicts of interest, market power and lack of transparency have only grown in recent years as the companies merged with big insurers: Express Scripts with Cigna, OptumRx with United Health Care and, most recently, CVS with Aetna.

Earlier this month, representatives from Cigna, CVS Caremark and OptumRx, among others, testified at a Senate Finance Committee hearing on soaring drug prices.