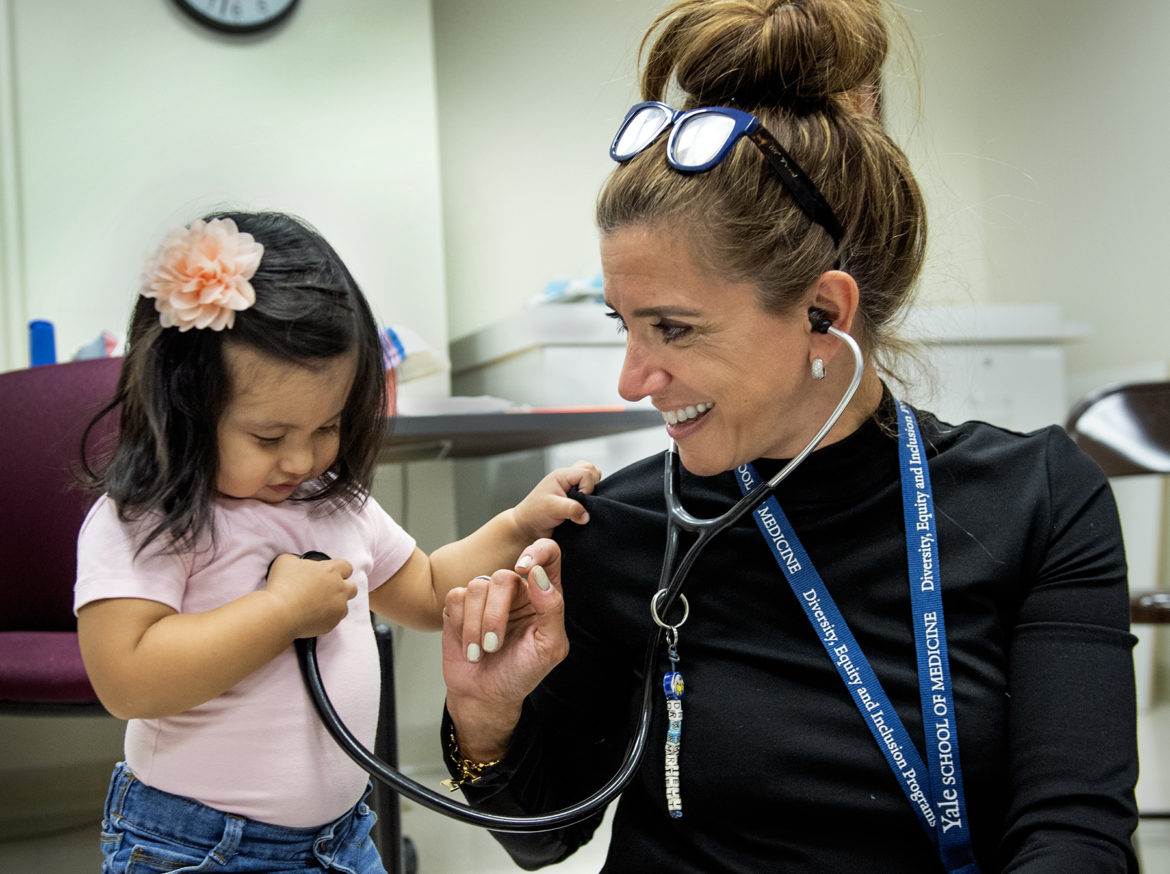 When immigrant families bring their children to the Yale Children’s Hispanic Clinic, it’s just not about check-ups and vaccinations. Clinicians help them deal with everything from teething to nutrition to finding a place to live.

But these days when front-line clinicians encourage families to use the many services offered through federal public programs, parents have questions—and misgivings.

“They are hesitant because they are afraid,” said Patricia Nogelo, a clinical social worker at the Yale Children’s Hispanic Clinic.

A proposed change in immigration law is making immigrants in Connecticut and nationally wary of utilizing federal programs that cover health, food and housing assistance. Immigration attorneys are working to reassure clients that it is still safe to access benefits, as no changes to the rules have been approved yet.

In this podcast, C-HIT reporter Colleen Shaddox interviews Patricia Nogelo and Dr. Marietta Vázquez about the chilling effect the proposed public charge rule change is having on immigrant families.

The proposal, by the U.S. Department of Homeland Security (DHS), would allow the federal government to consider immigrants’ use of public benefit programs, such as Medicaid (HUSKY), food stamps and housing assistance, as a reason to deny lawful permanent residency, also known as a green card.  The change in the so-called “public charge” rule is awaiting final action by DHS.  The American Academy of Pediatrics is among a number of organizations condemning the proposed rule change.

“It’s just another thing that is weighing down so heavily on these vulnerable women and children,” said Alicia Kinsman, director of immigration legal services with the Bridgeport-based Connecticut Institute for Refugees and Immigrants. Kinsman said she encourages her clients not to give up assistance with housing, food and other necessities—but they are forgoing these benefits anyway.

Greater Hartford Legal Aid has developed a factsheet to help explain the current law and the proposed changes.  According to the factsheet, for immigrants who have green cards using benefits like the Supplemental Nutrition Program for Women, Infants and Children (WIC), SNAP (food stamps) and Medicaid will not affect their immigration status.  The proposed rule change only applies to someone applying for a green card or seeking admission to the U.S. from abroad.

Lucy Potter and Christina Gill, lawyers at Greater Hartford Legal Aid, drafted the factsheet. They and their colleagues are reaching out to human-services and health care providers about the proposed rule change, which is very technical. Crystel, 15 months, cries as she gets a vaccination form RN Cinthya Chumpitaz. Crystel is held by her mom, Audelina.

There have been many misinterpretations and miscommunications of the proposed rule change, Potter said, adding that the proposal “is meant to terrify.” She said DHS states that cost savings from the rule will result from discouraging people not even subject to the rule—legal immigrants and those who have become citizens—from accessing benefits for which they are eligible.

Customs and Immigration Service (USCIS) spokesperson Michael Bars declined to respond to Potter’s allegation that the rule is designed to create confusion that stops immigrants and their children from accessing benefits.

Bars wrote in an email: “USCIS will give all feedback we received during the 60-day public comment period due consideration and look forward to addressing these public comments…  While we cannot respond directly to such comments at this time, much of the media reporting on the rule appears to reflect a fundamental misunderstanding of the Department’s proposal. Under the proposed regulation, when making a determination of the applicant’s likelihood at any time of becoming a public charge, the adjudicating officer must consider the factors set by Congress in the statute—age, health, family status, assets, resources and financial status, and education and skills. Until the rulemaking process is completed, we remain focused on faithfully implementing and carrying out a law that Congress first enacted more than 100 years ago in line with existing guidance.”

At the Yale Children’s Hispanic Clinic, patients are still coming to appointments, and many are benefiting from the federal nutrition program WIC. “But we don’t know in particular what other resources families … are choosing not to participate in,” said Dr. Marietta Vázquez, the clinic’s medical director. “It’s really a concern.”  She said she treats children who fear that they will come home from school to find their parents have been deported.  “It’s tragic,” she said.

Kinsman, of the Connecticut Institute for Refugees and Immigrants, said her clients who use benefits suffer from anxiety. She said she has had clients who did not want to send their children to school or use the library out of fear of deportation. She spoke of clients who are victims of domestic violence yet refuse to renew protective orders because they are afraid to walk into a government building. Andy, 15 months, rests against him mom, Paulina, as he checks out the activity at the clinic. Crystel crawls on the floor.

An early draft of DHS’s proposal that was leaked to the press said WIC and other services used by immigrants’ children could be grounds for denying a green card. These provisions were not in the proposed rule that DHS ultimately submitted, but providers report that some immigrants are still scared to access services for their children.

Until the DHS makes a final decision, questions remain.  The proposal “is putting babies, toddlers and pregnant moms, breastfeeding moms, at nutritional risk,” said the Rev. Douglas A. Greenaway, CEO of the National WIC Association.

The average WIC monthly food packet costs about $41, Greenaway said, whereas low birth weight infants require expensive care and often will need special services throughout their childhoods. Numerous studies have shown that WIC is cost effective because children enrolled in the program require less health care and special education services. In fact, the DHS proposed rule acknowledges that a public charge change could cause worse health outcomes “including increased prevalence of obesity and malnutrition, especially for pregnant or breastfeeding women, infant, or children.”

Greenaway agrees that immigrant families should feel confident in using WIC now, but he has concerns about how the program will fare in the final rule.

“Until that regulation is finalized and WIC is definitely excluded, there is sufficient question out there,” he said.