J. Evan Ward knelt on a dock jutting into Eastern Point Bay at the eastern end of Long Island Sound and hauled up a floating cage containing oysters.

These oysters came here from nearby Mason’s Crab Cove and serve as the resident population for lab studies that Ward, a professor of marine sciences, conducts at the University of Connecticut Avery Point. He studies these and other oysters and sediment gathered on boats operated by Norm Bloom and Sons of Norwalk. 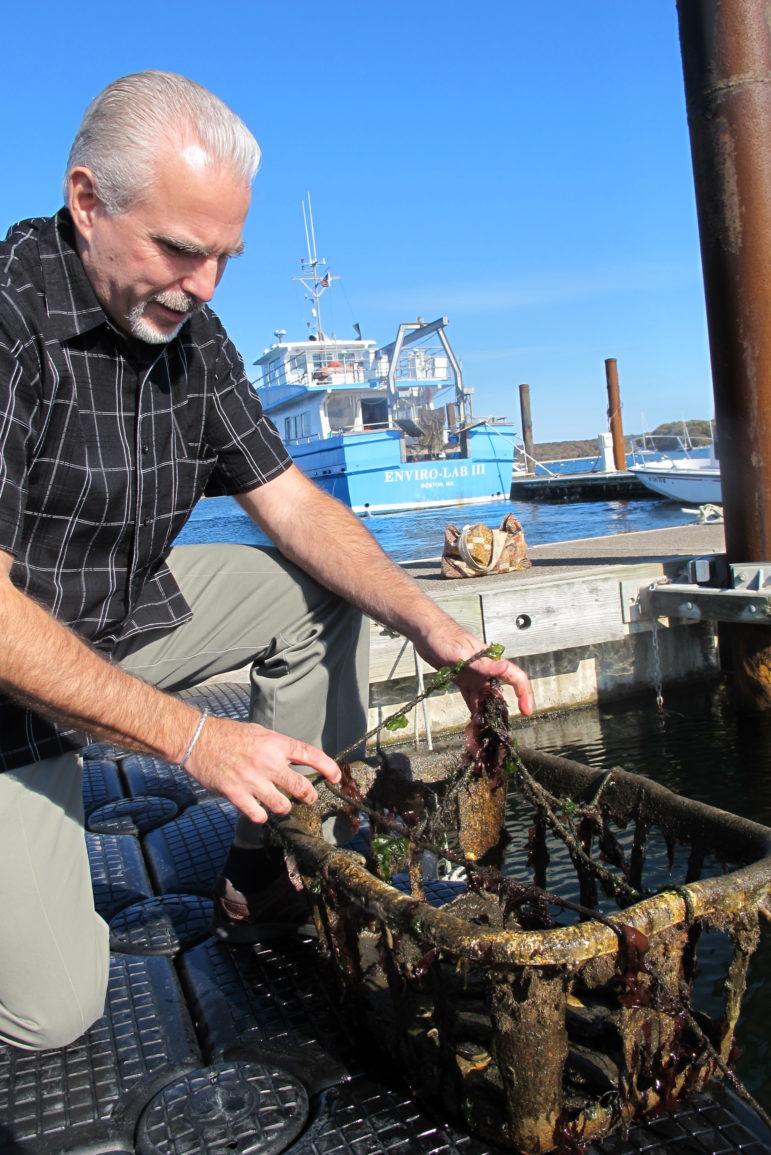 Oysters are master water filterers. A single oyster can filter up to 1.3 gallons of water per hour. They process much of what ends up in Long Island Sound. That includes the ever-increasing load of tiny pieces of waste plastic. Some of this ends up in their bodies.

New England’s great oyster markets appear so far to have escaped large plastic contamination. Oysters collected by Ward’s team contain fewer plastic pieces than one might expect—8 to 10 pieces per oyster, he said.

Oysters likely encounter more plastic than that but will spit out pieces larger than 1 millimeter, Ward said. Although oysters today contain few plastics, their bodies will encounter, and probably accumulate, much more than this because people are discarding more and more plastic every year.

Our throwaway society has created much of the microplastics problem. Around the world broken-up pieces of plastic waste, pieces from a few millimeters in size to so small that they can’t be seen, wash into waterways and oceans.

They enter water supplies, food, the guts of marine animals, fish, and shellfish and humans. Scientists don’t know all the ways they enter the water, or how they harm the environment or people. Early results show that these fragments are everywhere.

“We’re really behind in the United States,” Ward said.  “We are very much behind. The Europeans have much more money to study this.”

The effect of microplastics on human health remains largely unknown. King’s College London scientist Stephanie L. Wright wrote in a study published in the journal Environmental Science & Technology: “Chronic exposure is anticipated to be of greater concern due to the accumulative effect that could occur. This is expected to be dose-dependent, and a robust evidence-base of exposure levels is currently lacking.” In other words, the more plastics in the environment, the higher the threat. 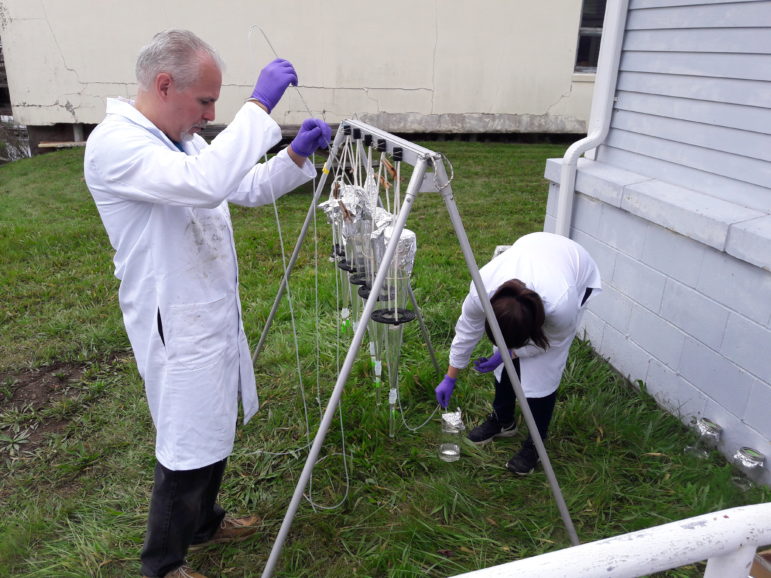 J. Evan Ward and graduate student Kayla Mladinich wait for material to settle out of the water they collected near oyster beds.

Plastic particles travel and accumulate in the human body, especially in lymph nodes and around joint replacements. They can carry harmful chemicals that attach to them in the ocean. They can cause immune system problems. Airborne particles like nylon can lodge in the lungs, causing breathing disorders.

Plastic pieces lodge in the intestinal tracts and tissues of oysters, clams, mussels and scallops, which humans eat whole. In studies of sand and gravel and mussels collected at Avery Point in Groton, Ward and three other scientists found microplastics in 73 percent of the sand and gravel samples and in all of the mussels they collected. These findings were published in Environmental Science & Technology in August.

Scientists know that plastic pieces find their way into drinking water, sea salt and even beer. University of Minnesota public health scientist Mary Kosuth and her colleagues documented small plastic particles in all three in the Great Lakes region.

Plastic that breaks into pieces includes synthetic clothing fibers, water bottles, cups and cup lids, straws, plastic bags and microbeads—the tiny bits of plastic mainly used in exfoliating body washes and facial scrubs. The federal Microbead-Free Waters Act of 2015 halted the manufacturing of microbeads in cosmetics in 2017 and over-the-counter medicine last year, but the microbeads in medicine can still be sold until next year.

“There are a lot of them out there still,” Ward said.

For several years now, people have heard about the “great Pacific garbage patch.”Despite how we might envision it, the “patch” consists of swirling wastelands of very tiny pieces, said Marcus Eriksen, a scientist, activist and author of Junk Raft, who saw some of the plastic gyres while floating with Joel Paschel across the Pacific Ocean in a raft made of old plastic bottles. Eriksen said plastics’ effect on human health represents a new frontier for science. “It’s really everywhere, but does it cause harm? We don’t know for sure.”

Most of the plastics in the ocean come from single-use objects and containers, and the rest from fishing gear. The tiny particles are easy for marine life to take in, and scientists worry about polychlorinated biphenyls (PCBs), the insecticide dichloro-diphenyl-trichloroethane (DDT) and other chemicals plastics absorb. Eriksen said eventually plastics will be found sunken to the ocean floor, washed ashore, or “excreted and deposited as sediment.”

China is the No. 1 contributor of plastic washing into waterways, and the United States is 20th, according to a study published three years ago in the journal Science. That study estimated that 192 coastal countries contribute between 4.8 to 12.7 million metric tons of plastic to the oceans every year. Without some way to stop the waste, it will greatly increase by 2025, the authors wrote. Eriksen said the plastic waste amounts to 5.25 trillion pieces. “Ninety-two percent are smaller than a grain of rice,” he said in an email interview.

Plastic is so ubiquitous in daily life, Ward said, that “you’re also eating a lot of microplastics every morning when you take off your fuzzy synthetic sweater over your coffee and it’s raining into your coffee.” 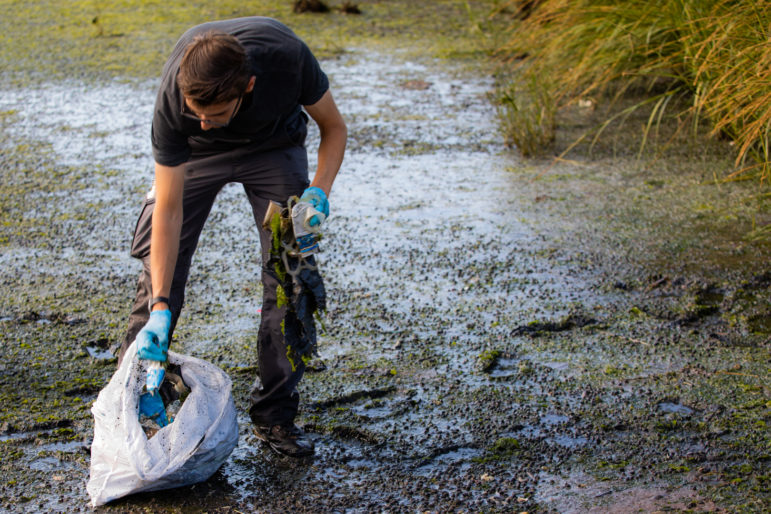 Stephen Urchick, 24, stuffs a handful of plastic bottles and 6-pack rings into a garbage bag. Urchick volunteered to help clean Long Wharf as part of the Save the Sound program run by the Connecticut Fund for the Environment.

And it’s not just microplastics that affect marine life. It’s estimated that over 1 billion plastic bags are used annually, and more than 100,000 end up in Long Island Sound each year. Three Connecticut towns have banned plastic bags in their stores: Westport’s ban took effect in 2009, Greenwich’s ban started in September and Stamford’s ban takes effect in April 2019. Other communities are considering similar bans on plastic and some are looking at banning plastic straws too.

Denise Savageau, Greenwich’s retired conservation director who has been active in the plastic-reducing movement, said many residents worry that using plastics along the coast harms the environment. “There’s so much plastic on the bed in Long Island Sound, it’s just incredible,” she said.

Savageau said people are confused when they see plastics labeled “biodegradable” or “degradable.” These plastics don’t actually break down, she said, but instead fragment into tiny pieces. With the exception of a few cornstarch-based materials labeled “compostable,” plastic doesn’t degrade, she said.

Richard Harris, a marine scientist for Norm Bloom and Sons, said they are not hearing any concerns so far from the public about plastic. But he said the company is relieved that microbeads are being phased out this year. “There are no alarm bells going off, but if we continue on our present course, I’m sure we will be.”

For now, Ward said, he continues to enjoy the mollusks he studies so closely.

But about the future, he’s unsure. “Will our kids be able to eat them?” he asked.