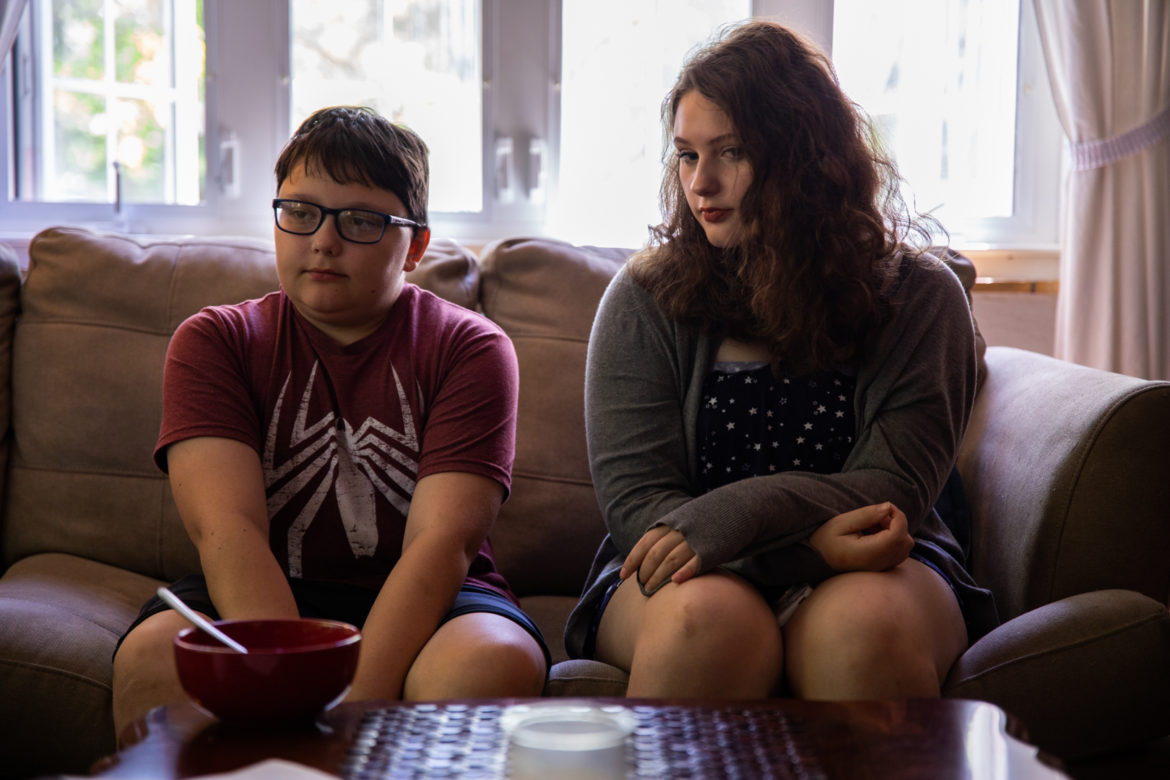 Peter, 11, and Mary Louise, 13, talk about how they’ve been affected by their father’s PTSD.

Growing up, Mary Louise Montini, 13, has often been angry, upset and on edge, just like her father, a veteran with Post Traumatic Stress Disorder (PTSD).

Her experience isn’t unique. Children can develop their own mental illnesses as a result of their parents’ struggles with PTSD and other mental health disorders associated with their military service, professionals say. And there are few resources and programs targeted to veterans’ children, compared to children of active military.

Experts say the treatment needs of veterans’ children will continue as their parents continue to rotate through deployments to conflicts around the world, including in Iraq, Afghanistan and Syria.

A Rand Corporation report called “Bridging Gaps in Mental Health Care” states that mental health challenges in family members can manifest “soon or long after a service member transitions to veteran status.”  Of 2.8 million veterans of conflicts in Iraq and Afghanistan, between 18.5 percent and 42.5 percent have mental disorders, the report said. Half of those deployed already had children at that time, it adds.

For the Montini family of Fairfield, the behavior and traumas endured by their father, Nicholas, have been evident through his 17-year-marriage to Kristina. A paralegal, he couldn’t hold jobs for long, often quitting in anger over minor issues. Finances were strained while Kristina was usually the sole financial support.

Agitated in crowds, Nicholas would have to leave a mall, for example, just as the family was enjoying a shopping trip. Anxiety, fear, guilt, depression, sleeplessness and horrifying nightmares took a toll on him and his family. His symptoms were classic PTSD, but he didn’t realize it, even though he was an Air Force veteran of the first Persian Gulf War. He finally sought help five years ago. Now 49, he is getting treatment at VA Connecticut Healthcare and has a job he loves. He is the New England military and veteran’s coordinator for Hope for Warriors, based in New York, which he said is therapeutic for him while enabling him to help others. Nicholas Montini, 49, served in the Air Force as an M60 Gunner during the first Persian Gulf War. He suffered from PTSD for years and finally sought treatment about five years ago.

For more than a year, the family has been getting family and individual counseling from a private therapist.

Both children said therapy has helped them understand their father’s PTSD. “I know how to deal with it. I understand it more. I get why it’s happening,” Mary Louise said. Peter, 11, who has attention deficit/hyperactivity disorder (ADHD), agreed. “I know a lot more about how it affects him,” he said. “The stuff that happens with Dad, I avoid it.”

Mary Louise has anxiety but has become less withdrawn and more social with the help of therapy, her mother said. She’s also the person Kristina vents to about their family’s issues because Kristina doesn’t know others who would understand.

Private therapy is the main source of mental health help for veterans’ families since health care provided by the U.S. Department of Veterans Affairs (VA) is mainly geared to veterans. Therapy can be expensive. Many providers don’t take insurance. In addition, they often aren’t acquainted with military and veterans’ culture.

The Montinis’ therapist takes insurance, but because of the cost of the co-pay, the family restricts visits to every other month, Kristina said. One such organization is the Cohen Veterans Network, founded and financed by billionaire Steven A. Cohen and headquartered in Stamford. It provides free or low-cost mental health counseling at 10 sites in the country, with a goal of expanding to 25. There are no treatment locations in Connecticut. The closest is at New York University’s Langone Health, which also offers teleconferencing counseling to Connecticut veterans and their families and to veterans who aren’t eligible for VA care.

Anthony M. Hassan, president and chief executive officer of Cohen Network, called for other philanthropists to fund programs like Cohen’s. He said it’s the only hope for meeting the needs of this population.

Hassan said that because of the lengthy wars in Iraq and Afghanistan, “one child can actually have grown up their entire life with their parent or parents impacted by war and deployment.” He said “family members can’t help but be impacted,” but added that “families are often an afterthought.”

Another resource is Give An Hour, an online state-by-state directory of licensed therapists who will donate at least one free hour of counseling to a veteran or family members. The service is anonymous and confidential. The therapists have a background in treating trauma and aren’t required to have experience treating veterans but are encouraged to participate in training about military culture, said Nancy Rice, chief operating officer.

Home Base, based in Boston, provides residential and outpatient treatment to veterans and services to families. It has served a few Connecticut veterans and family members in Boston and trained nearly a thousand Connecticut clinicians in military and veterans’ culture, according to a spokesperson. Mary Louise and Kristina say they often find themselves in the kitchen, venting and talking about each other’s day.

Maria Phillips of Clinton, whose father served in World War II, said she and her siblings have mental health issues that include anxiety, depression and obsessive-compulsive disorder, which she called “collateral damage” from their father. She said he had what was then called “shell shock” with symptoms similar to what is now identified as PTSD and traumatic brain injury.

Phillips used her father’s veteran’s death benefit money to co-found Kids of America’s Heroes, which, among other things, teaches educators and community leaders in the state about issues confronting children of veterans and active service members.

Roni Avinadav, a clinical psychologist at the Cohen clinic at NYU, developed a training protocol to help parents “understand how their trauma history is affecting their lives and their children.”

“It’s clear there is a need” for more mental health services for veterans’ families, she said, adding “whatever can be done to help these families, they deserve more.”

If you are a veterans’ family and need help:

Hope for the Warriors