Amy Schneider, 31, of Stratford, came to Hartford last Saturday toting a colorful sign she made that said “Fight Like a Girl.”

At Bushnell Park, she joined some 10,000 people at the second annual Women’s March to chant, mingle, and remind themselves that the fight isn’t over.

The day after Donald J. Trump took office in January 2017, millions of women and men headed to D.C., New York, and places like Hartford to protest. This year all around the country women and men gathered again to march, and to mark a year’s worth of unprecedented political action, with hundreds of women who’d never considered entering political office running and winning, according to the Center for American Women and Politics at Rutgers University. In Connecticut last summer, Yale’s Women’s Campaign School had 500 applicants for 80 slots in its five-day summer session. That’s a record.

In Hartford on Saturday, West Hartford’s deputy mayor, Elizabeth Kerrigan, stepped to the podium and the crowd roared when she announced her title.

In New York, the mayor’s office estimated some 200,000 people marched. At Trump’s Mar-a-Lago, hundreds of women dressed in “The Handmaid’s Tale” red cloaks and white hats marched. Tens of thousands of marchers flooded the streets around Los Angeles City Hall. People gathered as well in Raleigh, Charleston, and Oklahoma City—roughly 250 cities in all.

In addition to marking a new activism, the marchers protested the farces that emanate daily from Washington. Though in Hartford, Trump’s name was only occasionally mentioned because it isn’t just Trump. It’s Congress. It’s the GOP, nationally and locally, whose members continue to pretend that their president is defensible.

Accordingly, it’s been a year of erosion of the rights of some of the country’s most vulnerable populations, including immigrants, Muslims, the elderly, children not blessed to be born wealthy, poor women, as well as women who give birth in the ninth month. (OK. That last one was a line he flubbed at a recent March for Life rally, and yes, it was a head-scratcher.)

At that anti-abortion march, Vice President Mike Pence introduced Trump as “the most pro-life president in American history,” which would be yet another laughable piece of hyperbole save for the presence of Associate Justice Neil Gorsuch on the Supreme Court. Something as basic as a woman’s right to choose could be on the chopping block. 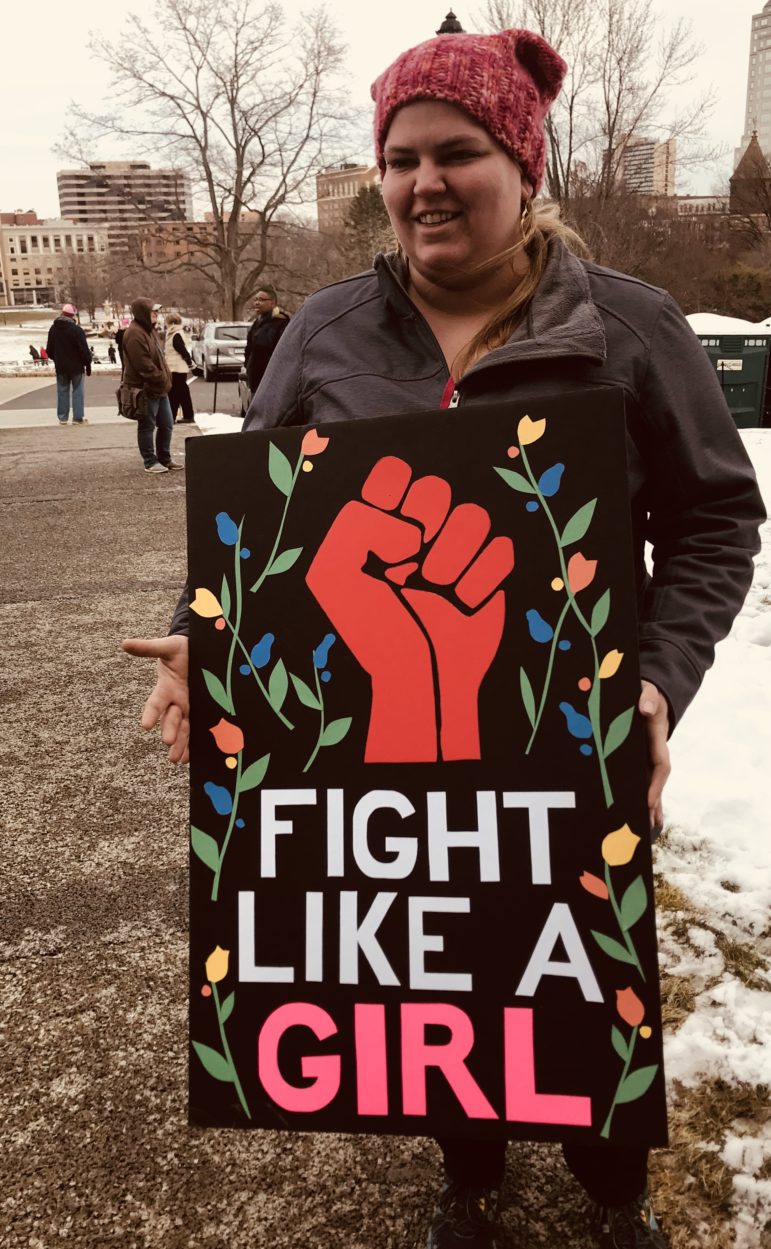 But it won’t be an easy fight. At every march around the country, volunteers ran booths and handed out literature that encouraged political action and involvement. In Hartford, those organizations included Planned Parenthood and PoliticaCT, a nonprofit that advocates for progressive candidates. Trump and his minions have managed to wake the beast.

How awesome are the times we’re living in? On the day of the march, Trump himself tweeted his support (while touting his fake-news about his fake-successes) and immediately was buried under tweeted responses that suggested he butt out.

Like so many other marchers in Hartford, last year Schneider made the trek to the mother march in D.C., and that was the impetus of her political awakening. She came home and got involved in local politics. She had volunteered a little in high school, and worked some on LGBT issues, she said, but this feels different. This feels serious, and she’s ready.

Not too far down the road, Schneider just might run for office. And yes: She’ll fight like a girl.

Susan Campbell is a distinguished lecturer at the University of New Haven, who spoke at Saturday’s march in Hartford. She can be reached at slcampbell417@gmail.com.