There are 27 facilities in Connecticut that use such large quantities of hazardous chemicals that they are required to submit disaster response plans to the U.S. Environmental Protection Agency.

About 170,000 people—roughly 5 percent of the state’s population—live within a mile of these facilities, risking exposure to a leak, explosion or adverse health effects.

Low-income people and children of color under the age of 12 are more likely than their white counterparts to live in these “fenceline” communities, according to a report by the Center for Effective Government. 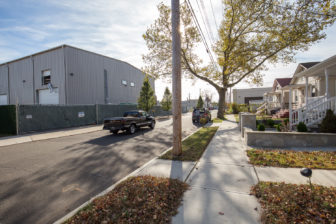 In its report “Living in the Shadow of Danger: Poverty, Race and Unequal Chemical Facility Hazards,” the center examined more than 12,500 facilities in 50 states, grading states based on the “disparities faced” by people living adjacent to or near these facilities. The center reported that children of color under age 12 living in the state were 2.2 times more likely than white children to live within a mile of one of these facilities. In many instances, residents are unaware of the dangers just blocks from their homes, the report said.

Connecticut, and 25 other states, earned a “D” grade for its inequities. But, like in many states, there’s little that can be done because many of the facilities were built under old zoning laws and are protected.

“I’ve been doing this for 25 years, and I don’t see things changing. It’s frustrating,” said Edith Pestana, administrator of the state Department of Energy and Environmental Protection’s (DEEP) Environmental Justice Program, which was formed to assist neighborhoods unfairly burdened by environmental hazards.

“I have to say I was traumatized that we got a ‘D,’ but … people are living where they were always living, and it hasn’t improved.”

“A lot of it has to do with terrible zoning. A lot of facilities are grandfathered in,” Pestana said. “Until cities start looking at public health again, when they are rewriting their planning and zoning rules, things are not going to change.”

In 2015 the EPA estimated that 150 “catastrophic” accidents occur nationwide at regulated facilities each year.

“These incidents keep happening and happening. It feels like we get a new report once or twice a week,” said Anna Fendley of United Steelworkers, which represents 30,000 workers in chemical facilities across the country, including Connecticut.

The most recent incident in Connecticut took place in December 2016, when an explosion occurred inside a warehouse at New Haven Chlor-Alkali bleach manufacturing plant. The incident did not cause any injuries, but it was a wakeup call to some nearby residents.

“You have families that live on this street,” said 28-year-old John Smith, pointing to his son arriving home from school. He lives on Welton Street across from railroad tracks that bring 90-ton railcars of chlorine to and from the plant. “I like this street, it’s quiet except for the trains, but if I could I wouldn’t live near here.”

An amendment to the Clean Air Act of 1990 mandated that facilities holding large quantities of certain potentially toxic chemicals submit a “risk management plan” to the EPA detailing the procedures to be followed if an explosion sends those chemicals airborne. 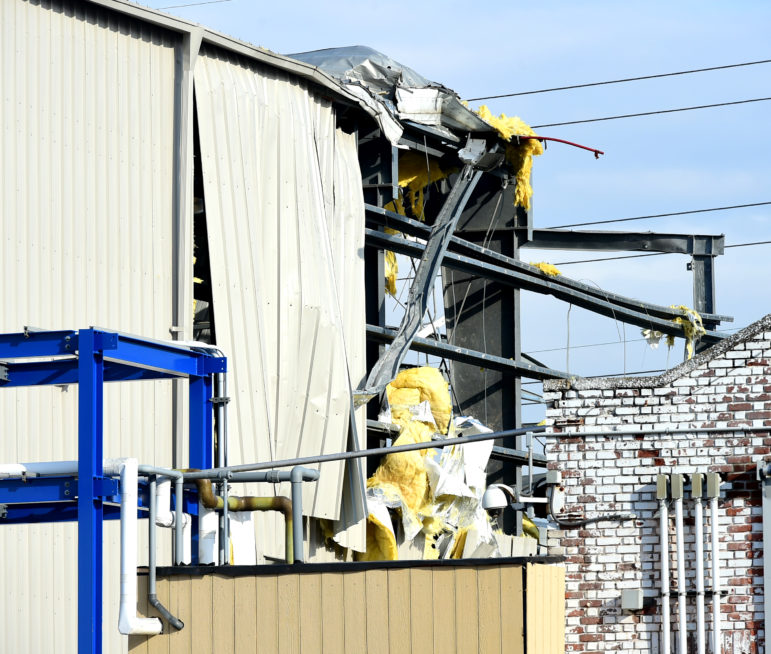 The Chlor-Alkali facility was damaged following an explosion last December.

Connecticut’s 27 regulated facilities range from chemical manufacturers to food and beverage facilities and aerospace companies. The chemicals stored or processed include ammonia, chlorine, pentane, butane, propane and others.

The facilities employ more than 7,000 workers and are scattered statewide. In addition to New Haven, facilities are in Bridgeport, Norwalk, North Haven, New Britain, Wallingford, Bristol, Suffield and Windsor Locks, among other communities, according to reports compiled by the Houston Chronicle’s Right-To-Know Network. The newspaper created the listing because the EPA does not have a public database of “risk management plan” facilities online.

No “segment of the population should, because of its racial or economic makeup, bear a disproportionate share of the risks and consequences of environmental pollution or be denied equal access to environmental benefits,” according to the state agency’s policy.

In 2009, the state enacted a landmark environmental justice law, which helps neighborhoods express community health concerns and negotiate with companies.

But that has done little to lessen the dangers because the law covers only new and expanding companies. Most facilities storing and processing chemicals existed prior to 2008.

The worst-case disaster scenario for the Chlor-Alkali plant would be a broken hose on one of those railcars, which would allow the chlorine to vaporize into the air, according to the company’s plan submitted to the EPA. An entire railcar of chlorine escaping could be toxic as far as 25 miles, impacting 1.6 million people, the documents report. The plant calls this “extremely unlikely,” but acknowledges the more immediate risk to those living nearby.

“However, even a chlorine release that is stopped within 30 minutes could be toxic to our nearby neighbors,” the documents read.

“There’s a really good chance you’re in danger if you’re that close,” said Sean Moulton, one of the contributors to the report who now works for the Project on Government Oversight. That organization took over much of the Center for Effective Government’s work in March 2016.

“Certain societal forces got us to this point,” he said. “We need to do something about future facilities and figure out a way to reach out to communities that are there now, ensuring that they have the proper tools and knowledge to deal with short-term emergencies and address long-term consequences of living near these facilities.”

What can change is how municipalities handle incidents. Sometimes it takes an incident—or an explosion—to bring about change.

In New Haven, residents have long complained about the Chlor-Alkali bleach manufacturing plant, formerly H. Krevit & Co., which shook their Cedar Hill neighborhood last December. A container explosion released sodium hypochlorite, a chemical dangerous to inhale and ripped a hole through the rear of the building. Residents heard and felt the morning blast but weren’t notified it was a chemical explosion for six hours.

After the explosion, the city’s Office of Emergency Management updated its notification system so if that were to happen again, phone calls and text messages would go to residents within 2 miles of the incident. The city also plans to distribute a chemical preparedness pamphlet citywide.

Chlor-Alkali’s business development manager, Arjun Murthy, now regularly attends meetings with neighbors to address concerns and said the plant has “made a number of process changes inside our plant and added new equipment to ensure that something similar never happens again.”

“Unfortunately, we had to have an incident to get to this point,” said Marie Gallo, a member of the Cedar Hill Merchants Association and owner of Gallo’s Appliance, which is a few blocks south of the plant. At a recent merchant meeting during which the city announced its plan, she said, “If we were taken a little more seriously three or four years ago, maybe we wouldn’t be at this point now.”

“People don’t know that it’s dangerous. They don’t know what they are living next to,” he said. “And particularly in low-income neighborhoods, people move very frequently and so even if you tell people today, then next year there could be a whole new set of people who won’t know.”