A New Britain couple, seriously hurt in a cellphone-related car accident on Route 8 in Harwinton, received a $1.3 million settlement in November. The previous year, a jury awarded a Torrington woman $1.4 million after a driver, talking on his cellphone while turning, struck her head-on, breaking her wrist and causing permanent injuries to her neck and back.

These are two of the largest awards or settlements to go to motorists injured in crashes since Connecticut’s ban on talking and texting on cellphones went into effect in 2005, and a recent change to court procedure may pave the way for more large settlements. 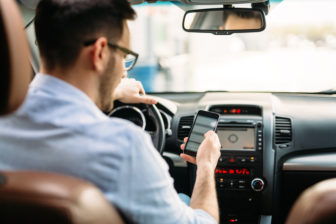 Despite the large awards, the incidence of fatalities and injuries from motor vehicle accidents in the state has continued to rise in recent years, state data indicates. The total number of car crashes increased every year from 2011 to 2016– from 78,433 in 2011, to 116,117 last year — according to UCONN’s Connecticut Crash Data Repository, which contains data that the state Department of Transportation collects. Whether more fatalities and injuries from those car crashes are caused by drivers distracted by their cellphones is harder to pin down.

“Without a doubt, distracted driving has become more and more prevalent,” said Mark Kochanowicz, an attorney with Trantolo & Trantolo, LLC, who represented the New Britain couple. “We see cases where there is no braking, no skid marks, especially on a highway, and there’s a sudden stop in traffic, and that’s a strong indication that the driver was texting or using their phone or on some other app.”

Effective Jan. 1, the state judiciary altered its standard list of questions a plaintiff can ask in a motor vehicle lawsuit to require defendants to state if they were “calling, texting, e-mailing, posting, tweeting, or visiting sites on the Internet for any purpose” at the time of a crash.

Attorneys have long complained that it’s difficult to prove a driver was on a cellphone at the time of a crash if the driver did not admit it to police at the scene. Drivers now have to state under oath at an early stage of a lawsuit if they were using their phone, making it easier for attorneys to access texting or call records. If the records show the driver was using a cellphone, a plaintiff can allege recklessness — a much more serious charge that can result in loss of license. It’s also a way personal injury attorneys can gain leverage against responsible drivers.

“It’s getting rampant now. People are constantly using their cellphones,” said Garrett Moore Jr., an attorney with Moore, O’Brien & Foti who has litigated distracted driving cases. “But the thing is, it’s difficult to prove. You have to have the records.”

The Connecticut Judicial Branch does not track trends in motor vehicle lawsuits. A judiciary spokesperson said the department amended the procedure because of an increase in disputes between parties in motor vehicle accident lawsuits over access to phone records.

Police and safety experts say drivers continue to use their cellphones while driving, causing more accidents than they are able to report.

The National Highway Traffic Safety Administration reports that in 2015, drivers using their cellphones caused 476 traffic fatalities and 30,000 injuries nationwide. In Connecticut, data on crashes that involved drivers using cellphones or other electronic devices from the first five months of this year show a decrease in fatalities but a slight increase in injuries. 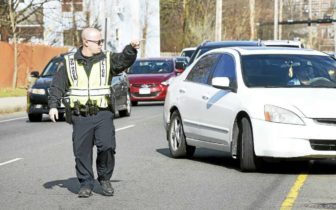 A New Haven police officer pulls over a distracted driver in 2016.

The data is limited, however, because the standard crash report filled out by police across the state did not include a section for distracted driving until January 2015. The state also warns that the data does not present a clear picture of all traffic injuries caused by drivers on cellphones because it can be difficult for police to determine at the scene of an accident whether a driver was actually using a cellphone.

To bring awareness to the problem, in 2014 the state initiated its campaign: “U Drive. U Text. U Pay.” Last year, the state directed more than $1.1 million in federal funds to 49 local police departments and the state police to pay for overtime so police could specifically crack down on drivers using cellphones.

Since 2009, in Connecticut police at all levels have issued between 29,000 and 47,000 citations for using a cellphone while driving each year.

The current penalty for using a cellphone or other electronic device while driving is a $150 citation on the first offense, $300 on second offense and $500 on third offense. A bill to increase those penalties was introduced in the state legislature in January, but it never made it out of the transportation committee.

“Everybody talks about distracted driving, everybody knows it’s a problem and the serious injuries that are received, and yet they don’t really put teeth into the law,” said attorney John Haymond of Haymond Law, which handled the $1.4 million jury award to the Torrington woman.

He said the only way to give a distracted driving charge some teeth in court is to link it to reckless driving, which is much more severe than a negligence charge.

Most distracted driving cases settle, sometimes even out of court, in mediation before the distracted driving charge is concluded in court. That’s what happened in a case last year, when a 72-year-old Stamford man was killed on his bicycle in May 2016 by a driver who was charged with talking on his phone while driving. The driver is facing a $150 fine for using a cellphone while driving and is next due in court this September. But the defendant’s insurance company already settled in mediation with the estate of the deceased cyclist for $3.125 million.