When Clinton resident Austin Haughwout uploaded YouTube videos of his pistol and flamethrower-equipped drones last year, he triggered a national debate over the use of weaponized drones that is expected to result in new state legislation.

Eight states, including Vermont and Maine, now have laws prohibiting or limiting the weaponization of drones, and Connecticut is expected to take up a similar ban in the next legislative session. A proposal in Connecticut to make it a felony to carry a weapon or an explosive in a drone was approved by the House during the 2016 legislative session, but the Senate failed to take action.

“Hopefully, next year, we will get the legislation across the finish line,” said Rep. Stephen Dargan, D-West Haven, co-chair of the legislature’s Public Safety and Security Committee. 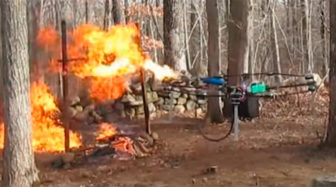 Drones with flamethrowers like this one built by Austin Haughwout would be banned in CT.

Nationally, there were 632,068 drones registered as of December, according to Alison Duquette, a spokeswoman for the Federal Aviation Administration (FAA). In Connecticut, a C-HIT analysis of the FAA’s most recent state-by-state database reveals that 5,731 drones were registered as of May.

Connecticut has been at the center of the drone controversy since the videos by Haughwout made national news, spurring investigations by the Clinton police and the FAA. No charges were brought against Haughwout and his father, Bret Haughwout, but the two men are expected to disclose information under oath about their use of weaponized drones before the FAA in the coming months, their attorney said. The men initially refused to comply with federal subpoenas to disclose information, but U.S. District Court Judge Jeffrey Meyer ruled in July that they must comply.

Their attorney, Mario Cerame, said he is prepared to contest any enforcement action or fines against his clients. He argues that the Haughwouts’ drone flights occurred before the FAA established in August specific regulations pertaining to drones.

Agency regulations prior to August, he said, were intended to apply to traditional aircraft with pilots —including airplanes, helicopters and blimps—and not to small, unmanned aircraft like drones.

An FAA spokesperson, Les Dorr, says that while the agency cannot discuss pending litigation, the FAA has the authority to “take enforcement action against anyone who operates an aircraft in a careless or reckless manner” and to levy fines against violators.

Many people fly drones for pleasure, and businesses and government agencies use them for numerous purposes, including assessment of farm crops, power lines, road conditions and storm damage. The FAA expects annual drone sales to jump from 2.5 million this year to 7 million in 2020.

“Civilian drones are incredibly useful devices that can and will improve our everyday lives,” Peter Sachs, a Connecticut lawyer and drone advocate, said. “Weapons are intended to cause damage, injury and even death. Attaching any sort of weapon to a civilian drone serves no useful purpose and does nothing to improve our lives.”

As drone popularity soars, lawmakers in New England and other states are expressing concerns about the dangers of civilians, and in some instances, of law enforcement officials, using weaponized drones.

Five states, Nevada, North Carolina, Oregon, Vermont and Wisconsin prohibit possession or use of a weaponized drone by anyone. Maine and Virginia prohibit weaponized drones for use by law enforcement or public agencies. North Dakota prohibits law enforcement from attaching lethal weapons to drones, but the state’s law doesn’t address Tasers, tear gas or any other weapon considered non-lethal.

In Connecticut, the Senate “never got a chance” to vote on a proposed drone bill because budget deliberations took up too much time, said Sachs, who worked with Connecticut lawmakers on the bill. “The upcoming session will be different, and it will pass. No one in the legislature is opposed to it,” he said. The bill that failed included a provision to allow law enforcement bomb squads to equip drones with explosive detection, detonation or disposal equipment.

Paul Fitzgerald, the Connecticut Police Chiefs Association’s legislative committee co-chair and Berlin’s police chief, says the state’s police chiefs plan to draft a policy that will not allow weapons of any kind on any drones used by law enforcement. It will be based on a policy that was developed by the Virginia-based International Association of Chiefs of Police and will be shared with the state legislature, Fitzgerald says.Weaponization issues aside, Fitzgerald says drones “can be a great tool in the future to help with search and rescue, traffic investigation, crime investigation and event security.”

“Drones have a legitimate place in some law enforcement operations, such as search and rescue efforts or accident scene recreation,” Smith says. “Given their immense capabilities for surveillance and weaponization, however, we strongly support requiring police to get a warrant before using them for spying and preventing police from attaching weapons to them.”

The new FAA regulations that went into effect in August make no mention of weapons but prohibit drones from carrying “hazardous materials” or operating in a “careless or reckless manner.” The rules also state that “no person may allow an object to be dropped from a small unmanned aircraft in a manner that creates an undue hazard” to people or property.

“The FAA is concerned about anything that can impact aviation safety,” says Alison Duquette, a spokeswoman for the agency. “We work with local, state and federal law enforcement agencies to investigate unauthorized or unsafe unmanned aircraft systems operations.”

FAA rules state that drones must weigh less than 55 pounds, must stay in the line of sight of the operator and can reach a maximum ground speed of 100 mph. Maximum allowable altitude is 400 feet above the ground, but a drone can ascend higher if it is within 400 feet of a structure.

All drones, including model aircraft used by hobbyists, must be registered with the FAA. Drones that are not model aircraft must be operated by someone with a remote pilot airman certificate or under the direct supervision of a person with such a certificate.