The rates of asthma-related emergency room visits and hospitalizations dropped in many Connecticut communities, the latest data from the state Department of Public Health show. 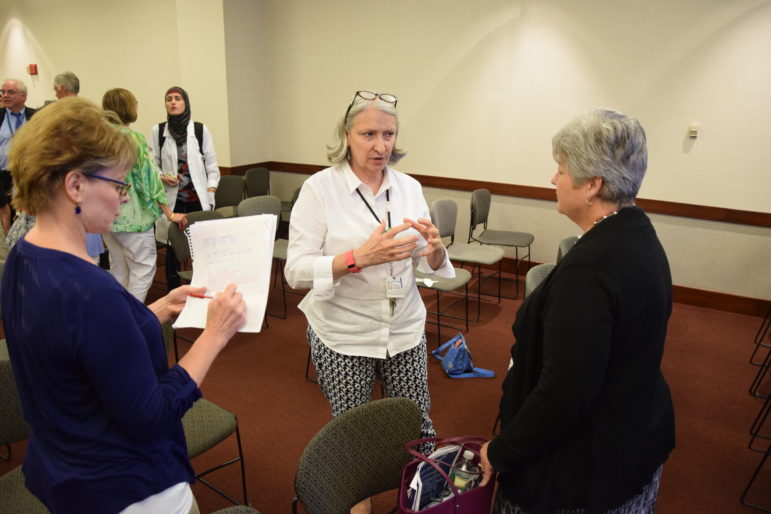 The rates help state health officials determine how well Connecticut’s 9.2 percent of adults and 10.5 percent of children with asthma manage the disease. The illness cost $135 million in hospital care in 2014, according to Connecticut hospital discharge data, an increase of about $22 million since 2009.

“This is a problem that everyone is looking at,” said Daun Barrett, the director for Community Outreach and Parish Nursing at Griffin Hospital in Derby, which serves the lower Naugatuck Valley.

Several towns in the Naugatuck Valley saw some of the biggest improvements in emergency room visit rates, the data show.

The improvements can be attributed to better education, more physician focus on asthma, and Putting on Airs, a state-sponsored home visit program that regional health departments have implemented, Barrett said.

Still, the emergency room at Griffin averages one patient a day with asthma symptoms, not counting those who end up being admitted, Barrett said.

“We want to see a decrease in emergency room visits,” Barrett said. “When you have to go to the emergency room, it’s a quick fix, not a long-term approach.”

The state’s cities continue to have high rates of hospitalizations and emergency room visits for asthma. While some of those rates decreased in the most recent data, others saw increases in both measures.

Marie-Christine Bournaki, director of the state Department of Public Health’s asthma program, said the statistics “allow us to identify where the hotspots are, and that’s where, from a program perspective, we strategize intervention in those particular regions.”

Easy Breathing, developed in 1998 by Dr. Michelle Cloutier, director of the Asthma Center at Connecticut Children’s Medical Center, helps doctors diagnose asthma and then treat it based on guidelines from the National Asthma Education and Prevention Program.

The program essentially takes research-based best practices in treating asthma, and simplifies them into color-coded charts and one-page questionnaires.

“She did all the work to make it easy,” said Dr. Ronald Angoff, who is with Pediatric and Medical Associates PC in Cheshire and New Haven, which has used the program for about 10 years.

Patients at Pediatric and Medical Associates are now asked four simple questions that could help indicate a case of asthma:

• Has the child had wheezing or whistling in the chest?

• Has the child been awakened by a cough?

• Has a cough or wheezing prevented physical activity?

• Has the child had a lingering cough after a cold?

Simple laminated guides in the office help doctors quickly find the appropriate treatment depending on the symptoms, including direction on which insurers supply which medications.

“It’s about giving them simple tools that really make it easier to do Easy Breathing than to not do Easy Breathing,” said Jessica Hollenbach, a research associate with the Asthma Center at Connecticut Children’s Medical Center.

Easy Breathing has been introduced to more than 400 pediatric clinicians in more than 100 doctor’s offices around the state, Hollenbach said, and research into the results shows it helps lower hospital use for asthma treatment.

Across the state, nurses, asthma educators and respiratory therapists visited the homes of about 938 people with asthma between 2010 and 2014 under the Putting on Airs program.

A 2010 study by researchers at the state Department of Public Health found that participants in Putting on Airs had fewer unscheduled emergency asthma doctor’s visits, fewer days missed from school or work, and fewer times using their rescue inhaler after six months.

“Asthma education is more than providing knowledge,” said Bournaki, the state asthma director. “It’s also helping the person to change their behavior and take control over their asthma. You can imagine it’s very difficult to be teaching in a context where the person is probably exhausted, going to the emergency room and being discharged.”

Bournaki said that during home visits, the asthma educator works with the patient to practice using inhalers, talks about their asthma action plan and assesses the home for environmental triggers for asthma attacks. The program involves three follow-up phone calls to touch base and gather more data.

“A lot of people, their asthma is not controlled because they’re not using the medication properly,” Bournaki said. “It’s very critical to spend time assessing how the person is administering the medication.”

Meanwhile, the Connecticut Hospital Association is working with doctors and emergency rooms across the state to also coordinate asthma education.

The initiative is training hospital workers to help patients with medications and push for more patients to have asthma action plans to keep them out of the hospital.

In 2013, only 32.7 percent of Connecticut residents with asthma had ever received an asthma action plan, shy of the state’s 40 percent goal, the latest data show.

“For the most part, [asthma is] well managed in an outpatient setting, like a community health center or a primary physician’s office,” said Madeleine Biondolillo, vice president of population health for the Connecticut Hospital Association, which launched the Connecticut Asthma Initiative last year.