When Katherine Hikin camps with her 10-­year-­old sister, Daniella, and her friends, she teaches them new songs and theater plays in Russian and English. 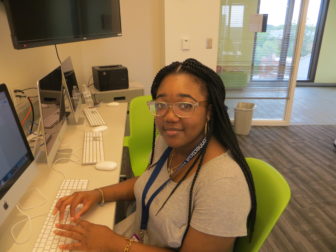 Hikin’s family is originally from Russia. Her mother, Tanya Hikin, who is a tax accountant, plays a Russian string instrument, and both her parents have had musical training.

Ever since Hikin was three years old, she has been singing in a local group, where she teaches younger students. She also plays the classical guitar competitively and has performed at Carnegie Hall in New York.

Coming from a musical family, she said she fell in love with the arts and music because they help her to relax. In the future, she hopes to minor in music in college, where she plans to pursue a teaching career. She would like to follow the path of her grandmother, who is a teacher.

“I knew I wanted to be a teacher because working with my sister and her friends inspired me to work with kids in the future…I will probably become a speech teacher for kids,” she said.

Natalia Gayle is a student at Achievement First, Hartford Academy.