In the last few years, groups that previously hadn’t worked together are joining forces to combat human trafficking.

Those entities include agencies such as the Department of Children and Families, which you might imagine would work against trafficking, as well as groups such as the Motor Transport Association of Connecticut and the Connecticut Lodging Association. Truck drivers and motel workers see trafficking firsthand, and they need training to recognize it and act appropriately.

The National Human Trafficking Resource Center, an anti-trafficking hotline, has received some 730 calls since 2007 that referenced Connecticut. Recent numbers from DCF show that last year the state received the highest number of referrals—133—since Connecticut began focusing on human trafficking in 2008, and it looks like the numbers are increasing. In the first quarter of this year, the state received 53 referrals.

The majority of reported cases in the state are for sex trafficking, though that may be misleading. Researchers say the number of people forced into labor trafficking is probably higher, but those people are more difficult to count, said Jillian Gilchrest, chair of the state’s Trafficking in Persons Council. 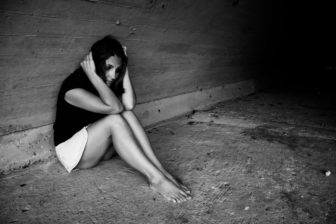 Getting a conviction for trafficking has been difficult in CT.

In Connecticut, trafficking includes compelling a person to engage in sexual contact or work or services. That can involve force, or threats, fraud, or coercion. If someone is younger than 18 and involved in commercial sexual exploitation then force, threat, fraud or coercion need not be present, the law states. The majority of victims are women and children, though DCF says the number of boys and men involved is “vastly” underreported.

Connecticut passed a law in 2006 that requires training programs about human trafficking for local police departments and prosecutors. Legislation passed in May—which goes into effect in October—expands required training for people such as hotel and motel staff to recognize trafficking. Hotels, motels, and rest stops now must post information on trafficking as well as a hotline number.

Other states are following suit. A bill is winding its way through the Massachusetts House of Representatives that strengthens that state’s anti-trafficking laws. Gilchrest said Connecticut is the first state to legislatively address the role of motels and hotels in human trafficking.

But there’s still work to do. Getting a conviction is difficult. There have been just two convictions of a trafficker in the state, ever, and a March forum sponsored by DCF in Hartford explored why. Formerly the law required more than one occurrence of sexual contact before there could be a conviction; Gilchrest said the law was changed in May and should help the state pursue more convictions. As Gilchrest said, in the last 10 years in the state, 1,847 people—most of whom are women and many of whom aged out of the DCF system—were convicted of prostitution. Meanwhile, just 267 men were convicted for buying sex from them.

Before Gilchrest started working as Connecticut Coalition Against Domestic Violence director of health professional outreach, she worked on human trafficking issues for the former Permanent Commission on the Status of Women. When that commission was folded into the larger Commission on Women, Children and Seniors, one of the first conversations revolved around continuing the anti-trafficking work.

“One of the first things we thought about in our reorganization was how to ensure there was a level of continuity with the experts we have, but also with the work we were doing,” said Steven Hernández, the new commission’s executive director. So Gilchrest has continued in her role working against trafficking in people, and trying to figure out some key questions.