A growing number of adults—about 52 million—suffer from arthritis, and data show women are more likely than men to develop it.

In 2014, 26.5 percent of women reported having doctor-diagnosed arthritis, compared with 20.5 percent of men, according to new data from the Centers for Disease Control and Prevention behavioral risk survey.

Many women don’t realize they are at a higher risk than their male peers, said Dr. Abhijeet Danve, a rheumatologist and faculty member in Yale School of Medicine’s rheumatology division.

“Of all the patients with arthritis, almost 60 percent of them are women,” he said. Several factors likely make women more susceptible than men: biological traits, genetics and hormones, Danve said. 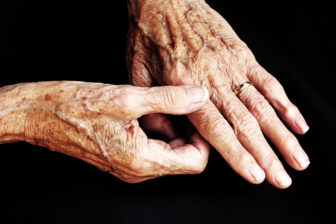 Rheumatoid arthritis often affects smaller joints, like those in the hands.

There are more than 100 types of arthritis, which commonly is defined as inflammation of one or more joints that affects surrounding tissue. The two most common types are osteoarthritis and rheumatoid arthritis, and both disproportionately affect women, according to the Atlanta-based advocacy group the Arthritis Foundation.

In all, one in five adults nationwide has some type of arthritis, the group reports, and it is the leading cause of disability in the United States. The number of people with doctor-diagnosed arthritis is expected to swell to 67 million by 2030, according to the organization. The CDC estimates that 78 million will be diagnosed with arthritis by 2040.

Arthritis tends to be more common in older adults. According to the CDC, 53 percent of those with arthritis in 2014 were age 65 or older.

Dr. Germano Guadagnoli, chief of rheumatology at Bridgeport Hospital, said women’s longevity also makes them more susceptible to osteoarthritis, which has a greater chance of developing the older a person is.

“Women are living longer, so we’re seeing more with osteoarthritis,” he said.

Biologically, women’s ligaments are more lax than men’s, Danve said. Intended to help women accommodate a baby and give birth, this trait tends to make their joints move more than men’s, increasing the risk for osteoarthritis, he said.

Women also have wider pelvises than men, also to aid in the birthing process, which puts more stress on their knees and makes knee arthritis more common in women, Danve said. Some women experience this especially after pregnancy, which stretches ligaments near the pelvis and puts added pressure on knees, he said.

Hormones play a role as well. There is evidence that estrogen helps protect against arthritis by preventing inflammation from progressing, Danve said. “When [women] enter menopause, they lose their estrogen” and arthritis can develop, he said.

Also, more women than men tend to be obese, another risk factor, he said. Every pound of weight gained puts three additional pounds of stress on knees and six pounds on hips, he said.

But while hormones and genetics likely play a role, Guadagnoli said, there are no definitive reasons why women get arthritis more often than men.

“Nobody’s really pinned it down,” he said. “We just see it as a pretty well-established demographic.”

When it comes to inflammatory types, like rheumatoid arthritis and Lupus, Guadagnoli said, genetics are the main factor in women being affected.

Rheumatoid arthritis and Lupus have underlying autoimmune disorders, which tend to impact more women than men, he said.

Gout is the only type of arthritis that affects men more than women, according to the Arthritis Foundation.

Symptoms of arthritis vary depending on the type of arthritis, but they all have some common ones, such as pain and tenderness in the joints, swelling in one or more joints, warmth and redness in a joint, and stiffness or difficulty using or moving a joint, according to the foundation.

Rheumatoid arthritis typically affects smaller joints, like those in the hands and feet, early on before progressing to knees, ankles, elbow, hips and shoulders, according to the foundation. With osteoarthritis, symptoms usually come on slowly and worsen over time. While men tend to get osteoarthritis in their hips, women typically get it is in their hands or knees, according to the group.

Women also are two to five times more likely to have anterior cruciate ligament (ACL) injuries than men, which makes them more likely to develop knee arthritis, according to the Arthritis Foundation.

In other New England states the prevalence of doctor-diagnosed arthritis was reported as: Vermont and New Hampshire, 24 percent; Massachusetts and Rhode Island, 25 percent and Maine, 27 percent. The figures are “age-standardized” percentages; the CDC weighted the data in order to allow people within states’ populations to be compared accurately even though age groups within the data vary widely.

To ward off arthritis—especially osteoarthritis—women should to lose weight if necessary and alleviate stress on their joints, either through non-weight-bearing exercise or with an occupational therapist, Danve said.

“A lot of the population of women are not aware that they should be doing this to prevent osteoarthritis,” he said.