Is this any way to fight an epidemic?

The Zika virus, which if contracted during pregnancy can cause a serious birth defect of the brain, has been reported in at least 45 states, including Connecticut.

There is no treatment for the infection, neither in patients who are pregnant and those who aren’t—though work continues on a vaccine.

Of course, that work could go more quickly if there was adequate funding.

Federal officials have known about the seriousness of the Zika virus for more than a year, yet important funding has been tied up in the worst kind of Washington impasse. In late June, a bill that would have earmarked $1.1 billion for Zika funding was sunk by a series of non-related riders. Democrats did not support the Republican-written bill, which came attached with provisions that cut funding from Planned Parenthood, as well as lift a ban on displaying the Confederate flag at military cemeteries.

What the Stars and Bars has to do with birth defects is beyond the scope of this column. Attaching riders to bills is not new politics, but in the case of an encroaching epidemic, doing so seems peculiar, at best.

President Obama and health officials pushed for a vote for funding before Congress left on a long summer break, but they’ve had little luck so far.

The Zika virus is spread mostly by the bite of a particular kind of mosquito, though it can also be spread through sexual contact. Many people who are affected with the virus don’t always exhibit symptoms. Those who do have symptoms generally complain of relatively minor issues such as joint pain and a fever that passes in a few days. But infection during a pregnancy can cause a serious birth defect of the brain known as microcephaly. Other effects of a pregnancy infection include, according to the Centers for Disease Control and Prevention, hearing loss and slow growth.

U.S. physicians say that more and more women have voiced concerns about the virus in the last few months.

Dr. Tom Frieden, CDC director, recently told NBC news that the spread of the virus is a “true crisis. This is already happening now.”

In Connecticut, the first Zika virus case was reported in March, when a 60-year-old woman who had traveled to South America came back with symptoms later found to be caused by the virus.

Raul Pino, commissioner of the state Department of Public Health, added the Zika virus to the lists of Reportable Diseases, Emergency Illnesses and Health Conditions and Reportable Laboratory Findings in February. 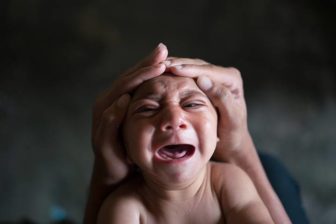 An infant born in Brazil with microcephaly.

That means, according to Dr. Matthew L. Cartter, state epidemiologist and director of infectious diseases with the state Department of Public Health, that physicians and health care providers must report suspected cases of Zika to the state and to the local health departments. The state updates its Zika count online every week. As of the first week of July, 433 people had been tested, and 25 had been found to have the virus, including three women who are pregnant. Each person had traveled to and returned from countries where the virus was already present, such as the Dominican Republic or Puerto Rico.

The state has 91 trapping stations in 72 towns, a third of them in Fairfield and New Haven counties, where most of the West Nile (another mosquito-born illness) cases were reported in years past.

In late June. U.S. Rep. Rosa DeLauro, whose district encompasses much of New Haven and some of Fairfield counties, announced the state would receive a $320,564 federal grant to fight the virus. That’s welcome money, but it’s hardly enough.

For most of us, a bite from the wrong mosquito means a few sick days.

But shouldn’t our elected representatives be concerned about virus’s potential on future voters?