Thousands of Connecticut residents are prediabetic but don’t know it and if they did, doctors say, early detection and lifestyle changes could prevent diabetes from developing in most people at risk.

The state Department of Public Health reports that 83,000 adults in Connecticut have prediabetes, which occurs when a person’s blood sugar level is higher than normal but not high enough to be classified as Type 2 diabetes. Nearly 9 percent of adults in the state—about 257,000 people—have been diagnosed with Type 2 diabetes.

Prediabetes has few early warning signs, but a blood test by a primary care doctor can detect at-risk patients. Once detected, changes in diet and exercise, sometimes with medication, can stave off the disease, doctors say. 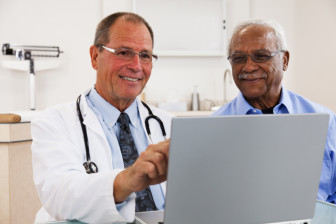 African-Americans are 1.7 times more likely to be diagnosed with diabetes than are whites.

“Prediabetes is completely silent,” said Dr. Bismruta Misra, an endocrinologist at the Diabetes & Endocrine Center at Stamford Hospital. While those with prediabetes might feel a bit sluggish or unusually thirsty, she said, the disease is typically discovered through routine blood tests and not on the basis of symptoms.

The problem is that people who don’t get regular checkups likely don’t get screened, Misra said.

A 2002 study of prediabetic patients by the National Institutes of Health’s Diabetes Prevention Program found that lifestyle intervention—including a change in diet and regular exercise—reduced the incidence of diabetes by 58 percent.

“Prediabetes is a huge problem,” said Maria Daigneault, an advanced practice registered nurse at Hartford Hospital’s Diabetes LifeCare center. “People are walking around with it and have no idea what the risk factors are.”

Dr. Latha Dulipsingh, population management champion at the Center for Diabetes and Metabolic Care at St. Francis Hospital and Medical Center, said that screening for the disease should be done at the primary care level. “But if your doctor is not aware of your risk factors and doesn’t screen,” prediabetes can go undetected and become Type 2 diabetes.

Lack of sleep is also a major risk factor. Misra cites statistics showing that people who routinely sleep less than eight hours a day have a 22 percent higher risk of developing prediabetes or diabetes than those who get adequate sleep; those who sleep less than six hours have a 48 percent greater risk.

Daigneault said she can often look at a patient and see if he or she is at risk.

“People with central obesity, who carry their weight at the center of their body, are at elevated risk. A bigger waistband is a contributing factor to Type 2 diabetes,” Daigneault said. Other signs include acanthosis nigricans, which Daigneault describes as “a darkening of the skin around skin folds, at the neck or the wrists.”

The American Diabetes Association recommends that people with risk factors be screened for diabetes and prediabetes, as should people over age 45.

The Centers for Disease Control and Prevention, which uses data from the National Health Nutrition Examination Surveys to calculate prediabetes population estimates, reports that men are more likely to be prediabetic than women. Prediabetes and diabetes are more common among African Americans and Hispanics compared to whites, the CDC reports. Overall, risk increases with age. On its website, the CDC has a one-minute diabetes quiz to check for risk.

Patricia Baker, president of the Connecticut Health Foundation, said, “People of color are at higher risk, and we don’t know why.”

Baker says that Connecticut’s African-Americans at 13.6 percent and Hispanics at 10.7 percent have significantly higher rates of diabetes than whites at 8.1 percent.

And, she said, data from 1995 through 2013 show an “increased prevalence of diabetes disparity between blacks and whites.” Diabetes-related mortality rates were more than twice as high for blacks than for whites: 92.6 per million black people versus 47.5 per million white people.

But Baker said relatively small lifestyle changes, such as losing seven to 10 percent of your body weight, can significantly reduce the risk of prediabetes and diabetes.

“You can intervene and make a difference,” she said. But, for most people, Baker said, “Something is not happening early enough to stop this disease.”

C-HIT is hosting a free community forum on diabetes from 5 to 7:30 p.m. Thursday at Chrysalis Center, 255 Homestead Ave., Hartford. Live Spanish translation will be provided. The event will include an appearance by Chef Jay Lewis who will offer some healthy food choices. Please register here.