Getting an autism diagnosis can take months, even years of doctor’s visits, and the diagnosis depends largely on watching a child play. As a result, who gets put on the spectrum and who doesn’t can depend on who and where the doctor is.

“Your likelihood of receiving an autism diagnosis, unfortunately, is very much dependent on where you live and which clinic you’re able to get to—if you’re able to get to a clinic at all,” said Alison Singer, president of the Autism Science Foundation, an advocacy group that supports autism research.

Activists like Singer have been trying to address this lack of consistency for years. But science has worked against them.

There is no way to objectively determine whether a child has autism. Diagnosis is a judgment made by a clinician after watching a child and interviewing parents and caregivers, said James McPartland, a Yale associate professor of Child Psychiatry and Psychology at the Yale Child Study Center, who is leading a $28 million national effort to change that. 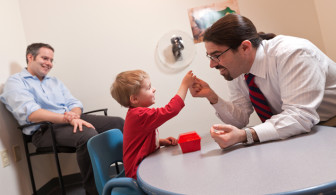 James McPartland in the Yale Child Study Center, where he is an associate professor.

What’s needed are “ways of quantifying human behavior that are not subjective and don’t involve human clinical judgment,” said McPartland, who is collaborating with researchers from four other institutions – Duke University, Boston Children’s Hospital, the University of Washington/Seattle Children’s Research Institute and the University of California, Los Angeles – that make up the Autism Biomarkers Consortium for Clinical Trials.

An objective test would also be useful for deciding whether a treatment is helping someone, and in developing new therapies, he said.

The Yale group recently began a small feasibility study to finalize the measures it will test, and is now enrolling children ages 4-11 in the study.

Most previous studies have looked at a few dozen children each, but this one will examine 200 from five different sites across the country. The children will be evaluated three times: at the start of the study, six weeks later and after six months.

Researchers will be looking to see if the measures are consistent across time, McPartland said, and whether they corroborate reports of improvement or decline by parents and caregivers.

The scientists will measure the child’s brain waves with an EEG and track the child’s eye movements while given certain tasks to perform—the two approaches that have the most support from previous research.

They also plan to record the sounds a child makes over a given time period to assess their “conversational volleys,” McPartland said. In addition, a camera system will count the amount of time a child spends near another person to see if those are viable measures, too.

Genes will also be part of the study, McPartland said, but autism genetics is so complex that it cannot be used either as a diagnostic or to categorize different types of conditions.

All of these measures have been used before to examine autism, but this will be the largest study exploring whether they can be used to diagnose autism and track individual progress, said Ann Wagner, a program officer in the division of translational research at the National Institute of Mental Health, which commissioned and is funding the study.

“It’s not like a fishing expedition,” Wagner said. “There were good scientific reasons to pick them, but we’re at the early stages of validating whether these work.”

Autism is defined by social deficits, repetitive behaviors and communication difficulties—all of which are challenging to quantify. If a child is more talkative today than yesterday is it because a certain treatment is working or because the child got a good night’s sleep and is picking up on mom or dad’s good mood?

The condition also looks different in different people, making it hard to generalize across the population.

Most experts now think autism is the result of different problems rather than a single condition. So far, though, researchers haven’t been able to break autism into categories or discern among people with the condition.

This isn’t just a labeling problem; it is holding back the development of new treatments, said Randall Carpenter, who tried unsuccessfully to develop an autism drug when he ran a company called Seaside Therapeutics.

“No one expects one treatment is going to be 100 percent effective in everybody, because we don’t believe it’s one cause,” said Carpenter, who splits his time between Massachusetts, where he is a research affiliate at MIT, and Connecticut, where his wife works at Fairfield University.

From 2010 to 2013, Seaside ran clinical trials on a drug called arbaclofen. The trials failed—and research on the drug was shelved—because the symptoms that got better weren’t the same ones the company had set out to improve. The Food and Drug Administration requires companies to predict the changes their drugs will spur.

“We had significant and impressive improvements in over half the people,” Carpenter said. “It was a hugely successful study. It just wasn’t successful from an FDA endpoint and that’s not surprising.”

A biological marker like the ones the Yale group is seeking would have helped show that the improvements were real, Carpenter said.

A biomarker could also be used to determine drug dosage, by indicating the lowest amount of drug that could trigger biological benefits, said Carpenter, who is just completing a four-year term on the National Advisory Mental Health Council.

The Makings Of A Marker

The Yale researchers and their collaborators hope to show that EEG and eye tracking can be used as autism biomarkers.

Those two measures make a lot of sense, McPartland said, because they’re inexpensive to administer. There are EEG machines in every hospital in America and lots of people know how to use them so an autism screen wouldn’t require much extra training, he said.

Figuring out if these markers work will also teach researchers something about autism, said Geraldine Dawson, a professor in the departments of Pediatrics and Psychology and Neuroscience at Duke University, which is collaborating on the research. If eye tracking proves effective, for instance, that suggests that a particular region of the brain is involved in autism. If a treatment affects that same brain region, researchers can assume it is helping people with autism.

“Those will be really sensitive markers that may actually pick up on change even before we could see changes on a parent questionnaire,” Dawson said.

But EEGs and eye tracking aren’t precise enough to allow drug companies to develop autism treatments or determine effective doses, said Dr. J. Jay Gargus, a professor and director of the Center for Autism, Research and Translation at the University of California, Irvine.

“I believe [eye tracking] is very informative for telling us how this disease works, where it works in the brain and what it does to the children,” he said. “But I would call it wrong to call it a biomarker because it’s such a cumbersome test.”

Gargus, a human geneticist and biophysicist, is hoping to prove that at least some kinds of autism can be diagnosed through a molecular-based test. He believes that a part of the cell called the endoplasmic reticulum is abnormal in autism. By detecting tiny glitches in cellular machinery, he aims to be able to offer pharmaceutical companies a useful tool for screening possible drugs, he said.

In the meantime, any kind of objective measure will be an improvement, said Singer, whose 18-year-old daughter and 51-year-old brother are both on the spectrum.

Singer said she has “incredibly high hopes” for the Yale research.

“That is the way we get good treatment information for our family members,” she said.