The number of syphilis and chlamydia cases increased statewide last year as the number of gonorrhea cases dropped slightly, according to newly released figures from the Centers for Disease Control and Prevention (CDC).

Nationally, the number of cases involving all three common sexually transmitted diseases increased for the first time since 2006, the CDC reports.

The 2014 Sexually Transmitted Disease Surveillance Report, which was released in November, shows that, nationally, the number of reported cases of syphilis increased 15 percent over the number reported in 2013. The number of gonorrhea cases rose 5 percent last year, and reported chlamydia cases increased by 3 percent.

Statistics for the state show a slightly different picture. Connecticut last year reported 13,382 cases of chlamydia and 169 cases of syphilis, 607 more chlamydia cases and 36 more syphilis cases than in 2013. Gonorrhea cases fell from 2,860 in 2013 to 2,333 last year.

“For all three diseases, Connecticut’s rates are below the national average,” says Dr. Lynn Sosa, deputy state epidemiologist with the Department of Public Health.

According to the CDC, Connecticut last year ranked 40th of the 50 states in the number of reported chlamydia cases per 100,000 residents. The state ranked 37th in gonorrhea cases and 37th in primary and secondary syphilis cases.

Sosa says there are many reasons for the big increase of chlamydia cases last year, including advances in tests to diagnose chlamydia and more efforts to increase screening of persons at risk.

Sexually active women younger than 25 years old are encouraged to have annual screenings, she says. 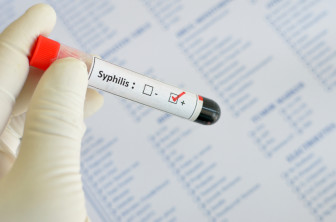 As in other regions of the country, there is a wide disparity in Connecticut in the rate of sexually transmitted diseases among races and ethnicities.

In both cities last year, the numbers of chlamydia and primary and secondary syphilis cases increased over the 2013 numbers, while the number of gonorrhea cases decreased. The increase of chlamydia cases in Hartford was small — seven more than in 2013.

Hartford reported the most primary and secondary syphilis cases last year — 13. New Haven, Bridgeport and Waterbury tied for the second-highest total — each reporting 11.

In Connecticut’s most populous city, Bridgeport, the city’s communicable disease clinic has seen a slight increase in syphilis cases but a stable number overall of sexually transmitted diseases, according to Kristin duBay Horton, the director of health at the Bridgeport Health Department.

Horton said that the number of patient visits to the clinic has decreased, likely as a result of the Affordable Care Act, which has provided people with health insurance and created more health care options.

To reduce the likelihood of contracting a sexually transmitted disease, Connecticut residents should use condoms and have safer sex practices, including limiting the number of partners and having partners tested, Horton says.

There’s been an increase in the number of people using PrEP (pre-exposure prophylaxis) — a pill to prevent HIV infection — and these people “are less likely to use condoms and follow other preventative measures,” she says.

Syphilis is currently the only STD for which information on the gender of the sex partner is reported. The CDC reports that a growing body of evidence indicates that men having sex with men are experiencing similar increases in gonorrhea and chlamydia infections, underscoring the need to further understand what is contributing to the increase.

The CDC recommends screening at least once a year for syphilis, chlamydia and gonorrhea for all sexually active men who have sex with men.

The agency says the most reliable way to avoid sexually transmitted diseases is abstinence. Another effective strategy for reducing the risk is mutual monogamy, which, according to the CDC, “means that you agree to be sexually active with only one person, who has agreed to be sexually active only with you.” The CDC also recommends vaccinations to prevent hepatitis B and HPV (human papillomavirus). Vaccines for males and females can protect against some of the most common types of HPV, which are spread by sexual contact. The CDC recommends three vaccination shots before becoming sexually active.