If you’re a woman, Connecticut is not a bad place to be.

The Institute for Women’s Policy Research (IWPR) released a report last month that examined the status of women by state. Overall, Minnesota was named the best place for women because of that state’s policies around issues such as reproductive rights, employment, poverty, and health.

Three states – Connecticut, Massachusetts and Vermont – tied for second. Even better news? Connecticut has consistently ranked among the best states for women in 1998, 2000, 2002, and 2004, according to the study.

The state generally scores well in such reports, said Carolyn Treiss, executive director of the Permanent Commission on the Status of Women who is also on the IWPR’s national advisory committee. Having a forward-thinking populace helps.

“We are not beating back attempts to take steps backward,” said Treiss. “One of the things that makes the state rate at the top is that we’re constantly trying to advance and move forward.”

With no serious legislative threats to, say, Connecticut women’s reproductive rights – as is common in places such as Texas and other states, such as Missouri, where abortion clinics are rare – policymakers can devote their energy to issues surrounding employment, work, and family. Those latter aren’t, of course, strictly “women’s issues,” but bolstering women’s financial health has long-reaching and important health effects on their families.

Overall, Connecticut earned an A- in reproductive rights, Bs in employment and earnings, and poverty and opportunity, a B- in health and well-being, and Cs in political participation, and work and family.

(We would have earned an A in reproductive rights, but state law doesn’t require schools to teach sex education. Curriculum is left in the hands of local school boards.) 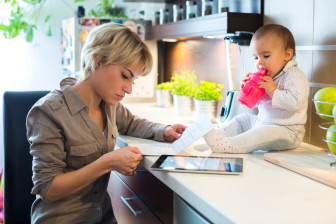 In the report, CT earned a C in the work and family category.

The state scores lower in some categories because according to the report, the gender wage gap in Connecticut is 76.7 percent. At this rate, women won’t reach pay equity in the state until 2061. Some of us don’t have that long to wait.

During the Connecticut legislative session that ended last week, the bulk of the bills supported by Treiss’ commission focused on women’s economic security. Not all their bills were successful, but Treiss takes the long view. Bills that don’t make it into law can sometimes start a conversation that leads to successful passage later, as with a bill on paid family and medical leave from this most recent session. That bill, said Treiss, went farther than expected, and illustrated that Connecticut’s workplace policies have yet to catch up with the state’s workplace realities.

Some of the victories, said Treiss, involved getting a conversation going about students giving affirmative consent before sexual encounters, calling attention to the needs of women veterans, and pushing forward a bill that protects interns from sexual harassment.

“That’s a huge group of young women who were unprotected but now will be,” she said. “These are women who were in an incredibly vulnerable situation.”

Treiss said Connecticut’s relatively high financial ranking is encouraging, since a significant portion of the state’s workforce is employed in high-paying jobs, where the gender pay gap is greatest. A recent study found that the higher the income, the greater the disparity.

Though the state must remain vigilant about protecting our reproductive rights, we could use a little of that vigilance around income and job opportunities. Connecticut is a pretty good place to be if you’re a woman, but it could be better.