When Jamie Daniel had her son, Owen, now 10 months old, it was only after the baby’s birth that she and her husband discussed their household division of labor.

Daniel, the director of programming at The Connecticut Forum, wanted to return to work after Owen’s birth, but she’d seen friends have the same intention, only to find that their jobs, with added baby-workload, proved too challenging. Those early discussions were, said Daniel, “one of the things that has worked in our favor.”

That makes her household unusually egalitarian. A recent Ohio State University report says that after the birth of a family’s first child, new fathers’ baby-related workloads increased by 40 minutes a day, while mothers’ workloads increased by up to two hours daily – even while men believe they were pulling equal weight at home.

And this is without factoring in breast-feeding.

In fact, dads actually dropped the amount of household (not baby-related) chores they performed per week by about five hours, to the surprise of one of the study’s co-authors, Claire M. Kamp Dush, OSU associate professor of human sciences and sociology. The couples were studied before the birth of their babies, and about nine months after.

“I did not expect the parents to overestimate by such a large degree,” said Dush. “I was also surprised that dads dropped their time in housework after the baby was born.” 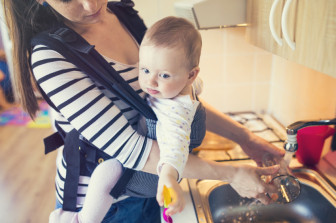 A mom’s workload increased, after the birth of a first baby.

Published in the Journal of Marriage and Family, the study said the couples shared the workload at home prior to their baby’s birth, and both continued to work outside the home after. Prior to the baby’s birth, both partners say they averaged 15 hours of housework a week. After the baby’s birth, fathers report that they reduced their housework by five hours, on average.

Dush said several factors contribute to the imbalance of work after a baby comes home, and she was blunt in her assessment.

“I think men are not doing their part,” she said. “They expect their partners to do more than they do. They also may not be comfortable around babies, and don’t get as much time to have solo parenting time with them, so they leave caring for the baby up to the mother.”

Then, too, women bear some responsibility for the imbalance, she said.

“I think women feel a lot of pressure to be perfect mothers and housekeepers,” said Dush. “Therefore, they feel more responsible for the babies’ care and how clean the house is. This may lead them to manage, or gate-keep, their partner’s parenting and lead them to tell their partner how to parent, or even how to load the dishwasher. No one likes to be told what to do, so fathers may disengage and just let her do it the way she wants.”

“Neither men or women are off the hook in terms of why men do less than women,” said Dush. “But men need to get in there and take their fair share.”

For Daniel, the division of labor comes rather seamlessly. Sometimes her husband makes dinner while she gets Owen into bed, and sometimes their roles reverse.

“We both sit down and relax at the same time,” she said. And that makes all the difference.

Dush suggested a universal paid paternity leave in the U.S. might positively affect the numbers, though there hasn’t been much stomach in Washington to discuss it. In his most recent State of the Union address, President Obama said that the U.S. is the world’s only developed country that doesn’t offer such a leave. Bureau of Labor Statistics says that just 13 percent of American workers have access to a paid family and/or maternity leave. Of 185 countries and territories studied in a recent United Nations policy brief, only United States and Papua New Guinea do not offer a paid family leave.

Eventually, Dush says she’d like to broaden her research into the relatively new field of same-sex partners who are also parents.

“I am very interested in these issues for these couples,” she said. “We have a grant under review that would collect data from them on housework and childcare. So, hopefully in the future!”