During her years at the University of Connecticut, Naomi Adler suffered such severe depression that sometimes, she couldn’t get out of bed to go to class.

But students like her could not always receive prompt treatment at the campus clinic.

“They need to be able to get people help faster,” said Adler, a May graduate from Kent. “I’ve called up and been told I have to wait even two months, and it’s like, ‘I need help now.’”

All three departments that treat a growing number of UConn students for mental health counseling on the Storrs campus said they have struggled this academic year to meet the demand for services.

The number of students who received mental health counseling at Cracco’s clinic rose 21 percent during the 2013-14 school year, and she projected another 15 percent increase for the school year that ended May 10. There are round-the-clock services for students in crisis, but Cracco said there are “too many patients, not enough staffing.” 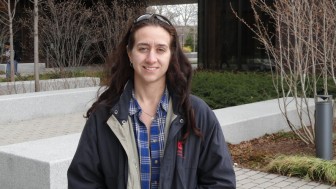 The clinic has started hiring per diem therapists for the peak months of April and November, Cracco said. It has also referred students to local counselors and started holding group therapy sessions.

Many college counseling centers across the nation are dealing with a rising demand for treatment, said David Reetz, survey coordinator for the Association for University and College Counseling Center Directors.

Due to the growing need, 31 percent of center directors reported having to place students on a wait list due to a lack of appointments while 50 percent reported having to limit the number of sessions per client, according to Reetz’s association.

“The rise has been a growing problem for years now,” Reetz said. “I would say it’s reached a boiling point.”

Mirroring that national trend, the percentage of UConn undergraduate and graduate students seeking counseling on the Storrs campus rose from 4.38 percent in 2006-07 to 6.19 percent last year, with depression and anxiety as the most prevalent diagnoses.

“I just think UConn is becoming an increasingly competitive and demanding school and I think students are starting to feel the effects of that,” Parent said. 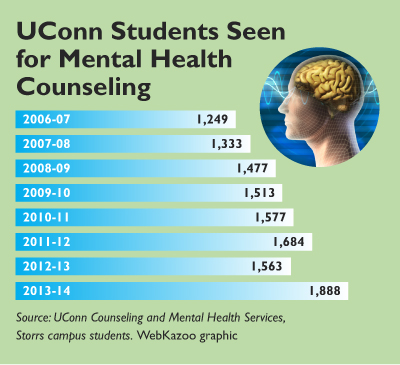 In 2014, 94 percent of 275 college counseling directors reported an increase in students with severe psychological problems, according to the National Survey of College Counseling Centers. Anxiety is the fastest-rising diagnosis on campuses nationwide. The percentage of students who sought help for anxiety rose from 37 percent in 2009 to 46 percent in 2013, according to Reetz’s association.

Reetz attributed much of the rise to the constant information-sharing that new technology allows, which he said makes people more aware of tragedies and threats.

“We just live in a more anxious society these days,” Reetz said.

Social networking adds to the stress on students, said recent UConn graduate Abigail Viner of Stratford, a member of Active Minds, a student group that encourages the discussion of mental illness.

“You can’t really unplug from that and I think it’s a big stressor because it’s constant stimulation,” Viner said.

“We’re get­ting out of col­lege and fac­ing the real­ity that we might not even get jobs, and tuition is increasing all the time,” said UConn graduate student Emily Bramande of East Hartford, who has been diagnosed with depression and obsessive-compulsive disorder. “We’re being put in further and further debt without even the certainty that we’re even going to be able to get a job and pay it off at the end.”

Some UConn students who have sought counseling say they have faced a stigma among classmates and even faculty members. 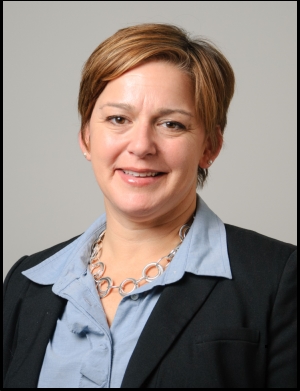 “Someone can be born with diabetes and that’s accepted, whereas someone born with psychosis caused by a chemical imbalance is not,” she said.

Adler said that she has friends who know that they could benefit from counseling but don’t seek help because they fear being labeled as “crazy.”

Students said many professors raised in an era that was less aware of mental illness lack the understanding to communicate with students who are struggling.

“For older generations, that stigma is really great and that affects how they look at you,” Bramande said.

Adler also said the mental health training that RAs receive is lacking. When students are struggling, RAs are supposed to call their hall directors.

“That’s not always the best thing,” Adler said. “Sometimes you just want to get it off your chest and not fear the repercussions of being sent to the hospital.”

UConn provides faculty members and RAs with training and access to counselors in a crisis, Cracco and other officials said.

“A book or paper may say one thing, but real life isn’t necessarily black and white,“ Adler said. “It’s complicated.”

Matthew Zabierek, of Pittsburgh, is a senior majoring in journalism and psychology at UConn.